In the wake of the British blues rock explosion of the late 1960’s, Gary Moore emerged from the long shadow cast by the likes of Eric Clapton and Jeff Beck. The native of Belfast, Northern Ireland went on to set a new gold standard for guitar over the course of the next three decades. His playing would be revered by peers and fans alike, and Gary would go on to work with some of the most influential names in music – artists like George Harrison, The Chieftains, Andrew Lloyd Webber, John Mayall and B.B. King. Peter Green of Fleetwood Mac was the first to champion the seventeen-year-old Moore’s talent, eventually even passing the proverbial torch – in this case, his prized 1959 Gibson Les Paul – to the young guitarist.

When Gary first joined the progressive fusion band Colosseum II, suddenly people were saying ‘Where did this guy come from?!’ Going back and listening to Gary’s previous records with Skid Row wouldn’t provide many clues. The music of Skid Row – a mixture of boogie, country and blues reminiscent of The Grateful Dead, The Band and Ten Years After – bore little resemblance to Gary’s later work. The music of Colosseum II was incredibly complex, and Gary had his work cut out for him. After all, he was self-taught, couldn’t read music and had to play everything by ear. The band recorded three exhilarating albums full of stop/start riffs, tricky time signatures and brilliant musicianship. Colosseum II could have given the venerable Mahavishnu Orchestra a run for its money any day of the week.

Gary lent his talent to Philip Lynott and Thin Lizzy on three separate occasions in the Seventies. This relationship produced a real gem in 1979’s Black Rose album. Lynott returned the favor, appearing on Moore’s solo set, Back on the Streets. The album was a real turning point for Gary, straddling the fence between Thin Lizzy-styled rockers and Colosseum-inspired instrumentals. It contained the stunning duet Parisienne Walkways, a well-deserved top 10 hit. It also seemed to be a last glance back at where Gary came from, while at the same time pointing to what would come. Indeed, as Gary became a songsmith and created vehicles in which to better express himself his playing suddenly began to speak volumes to a growing audience. And in turn, his albums climbed the charts. Why? Because inside the no-nonsense exterior of this temperamental Irishman lies an introspective soul, and Gary would plumb to such depths that his solos would often be either achingly beautiful – as in Empty Rooms, I Look at You and Military Man – or electrifying in their intensity, as in Shapes of Things, Out in the Fields and the jaw-dropping intro to End of the World. For my money, the greatest eight minutes of guitar Gary Moore has ever recorded is his heart-wrenching cover of Roy Buchanan’s The Messiah Will Come Again, the centerpiece of After the War, Gary’s last real rock album for some time. From that point on, around 1990, Gary’s interest returned to the blues, a passion which has sustained him to this day.

No matter the genre, one thing is evident – Gary Moore doesn’t play for you, he plays to you. Gary’s solos are not simply instrumental breaks in the middle of a song. They drive the song forward, with intention, and are an integral piece of the puzzle. The lion’s share of the songs chosen for this tribute come from Gary Moore’s first few solo albums; they were originally recorded by Moore when most of the musicians involved here were still learning to play. Chris Poland, guitarist for Megadeth and Ohm, contributed to Parisienne Walkways on this release and remembers, ‘The first time I ever heard Gary Moore, I just couldn’t believe his guitar tone, and how fearless he was. It’s that same fearlessness that Jeff Beck has. When Gary Moore’s done with a solo, you’re kind of breathless.’

The first time I heard Gary Moore, his phenomenal speed left me stunned, and his guitar seemed to wail and sing like nothing I had ever heard. It was as if Gary was saying all the things on guitar that I had been waiting so long to hear. His playing made my blood boil, gave me chills – it was breathtaking. For my 30th birthday, my wife surprised me with a Gary Moore signature edition Gibson Les Paul. When I first saw it and held it in my hands, I felt like I was frozen in time. It was as if my musical life was flashing before my eyes. I heard the echoes of the songs playing back to me in my head like some sort of surreal soundtrack, I thought of the countless hours I’d spent learning those songs and I remembered Paris in ’49… As I looked down at the guitar in my hands, I thought ‘This is it – this is the guitar that’s been singing to me all these years.’ Gary Moore’s guitar continues to sing to audiences around the world – from the Emerald Isle, over the hills and far away.

Gary Moore died on February 6, 2011 while on holiday in Spain. 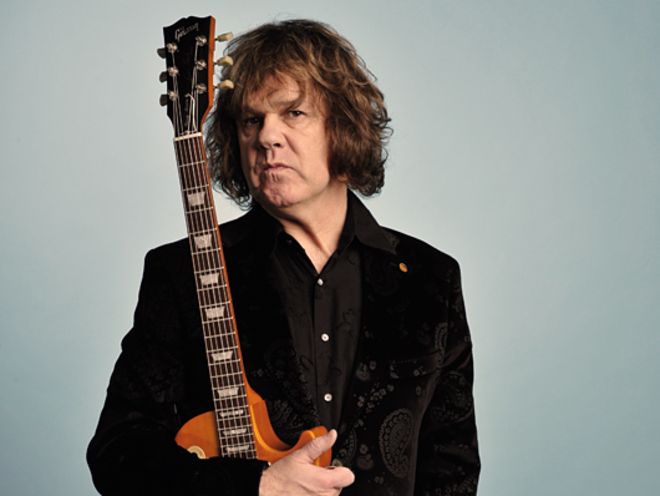