Bass player in my soul?

As I mentioned in another post, a friend was going to lend me one of his basses. He brought it to me a month ago and I picked it up pretty quickly. It was a very nice bass, a MIM Fender Jazz. Last week, he offered to sell it to me for $75. Yes, I said $75! I quickly gave him the money before he could come to his senses.

I also found a Gallien-Krueger Backline 600 amp head on Craigslist. I bought it Friday and since I knew I wouldn't be able to handle having a new head with no cabinet, I stopped by Guitar Center on the way home. I was looking at the GK Backline 2x10 and noticed that the Goldline 2x10 was the same price (it is usually $100 more). I asked about it and he said it was on sale. It's a thing of beauty...

Once I got the head and cabinet hooked up, all I can say is WOW! Amazing sound and LOUD. My neighbors are now going to hate me. The head is 300 watts at 4ohms and 180 watts at 8ohms. Eventually I want to get the [urlhttp://www.guitarcenter.com/Gallien-Krueger-Goldline-115GLX-II-1x15-Bass-Speaker-Cabinet-104480751-i1169241.gc]1x15 cabinet[/url] to go along w/ the 2x10. Saturday, I got together with a guy I work with that plays guitar and jammed. We had learned Sunshine of Your Love, White Room and Tush. He has a very nice MIA Fender Strat and Fender Twin amp. This is our first jam w/ a bass and it sounded so good. As I was packing up, I realized I had the -10db switch turned on on the head, so I wasn't even playing w/ full power.

I have to say, I am picking up the bass way faster than I did guitar. Of course, I know most of the fretboard and I've built up the finger strength and know how to fret properly. But, I learned to play both Cream songs with just a couple days of practice. And there was a couple of times when we were jamming when I quit thinking about what I was playing and just felt the rhythm and I played much better. I still want to play guitar, but I am definitely going to work hard on bass. Once my son gets done w/ marching band, we are going to get him to join us on drums and play some trio stuff (although we'll need to be a quartet cause none of us sings).

Edit: I will try to post some pictures tonight.

It was a very nice bass, a MIM Fender Jazz. Last week, he offered to sell it to me for $75. Yes, I said $75! I quickly gave him the money before he could come to his senses.

Why do those things never happen to me?

Anyway, congrats on the new gear, and enjoy! Bass is best. 8)

"Everybody got to elevate from the norm."

White room is one of my favorite songs. I'll play on the bass and also on the guitars. The middle riff with the leslie is pretty cool.

Here's some pics, as promised (click for larger pic). 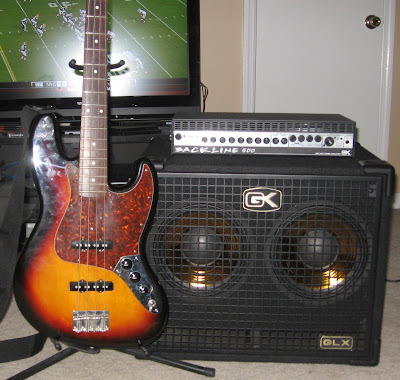 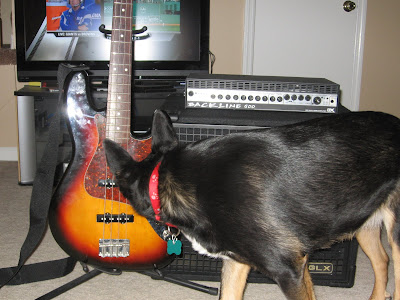 BTW, yesterday I was playing a similar bass.

Bass players are ALWAYS the COOL Guy/Gal in the Band!
You have chosen to walk a slippery path my friend!

Dig the Blues? Check out the Blues Republic!
http://www.bluesrepublic.org

Latest Post: When You Are Ready For An Upgrade On Your Guitar? Our newest member: linkalternatiftogel Recent Posts Unread Posts Tags