How did you learn guitar?

Hiya guys! I wanna learn to play and I have no idea where to start so I figured I'd ask people hpow they learnt guitar. I can't get lessons atm and I was just wondering if you guys used any specific self-learn guitar books or whatever. If you know any feel free to leave those here as well :P

I could already read music, so the biggest job was learning where to find the notes on the guitar neck. Once I'd got that, and learned a few chords it was a fairly straightforward exercise. Reading the notes on the 6th string was a bit of an adventure as I'd never worked below Middle C before, but you get there.

My first guitar came with the "A Tune A Day" book. My first electric guitar a couple of years later was accompanied by a borrowed David Bowie songbook. The first riff I ever played was "The Jean Genie" - I think; it might have been "Ziggy".

You played piano before the guitar? Or you'd just learnt how to read music some other way? Oh another question uhh is the guitar difficult?

We all had recorder lessons when we were 6, so my whole school grew up able to read music to some extent. All my students learn to read music from day one.

Yes, the guitar is a difficult instrument to learn if you try and play Dream Theatre before you can play The Shadows - don't try to run before you can walk, basically.

I use a combination of Youtube videos and the Rocksmith video game. I'm still pretty new so we will have to see how it works out for me. :note2: :note1: :note2:

I gotta admit people are so lucky they have music lessons and already learn to read sheets before they're out of elementary..I wasn't as lucky. I'm guessing I have a long road ahead of me to make any music of my own. It's funny you had to mention Dream Theater as I actually want to learn the guitar to make progressive rock of my own. :? I'm a litle scared now...

That's the first I've heard of Rocksmith :shock: . It looks fun..but I dunno feels weird playing a video game to learn Chords. It'd be awesome if you progress well into it just with a video game.

Being over 50 I was a little skeptical about using a video game to learn, but Rocksmith is very good. It is not just games, but a very professional teaching aid. It has a large selection of songs, and you can get more.

You learn all of the basics, chords, slides, drills, whole songs, and yes, there is a variety of actual games. It has great lesson videos, graphics, and you use a real guitar, not some cheap video game controller shaped like a guitar. The feedback is what I like the best. 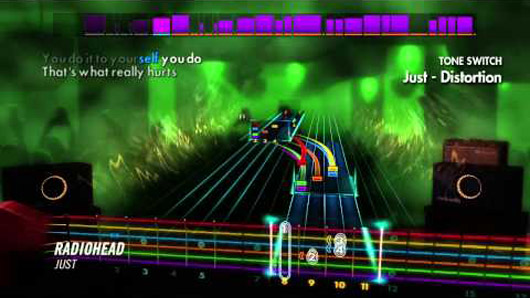 Learn chords, and learn to switch between them. Doesn't take much, just G D Em and C. Get Am and A if you're up for it. Later on you can do E and some barre chords. Then get a capo and look up chords for all of the songs you love and learn as many of them as you can. Play along to the recording, then sing along to your own playing. It'll be addictive when you get there.

I have fun making country music.

I started on drums in Jr. High school and learned how to read drum music.

Then when a rental became available, I switched to sax and learned standard music notation.

I got in various rock bands and since not every songwriter has the wisdom to put a sax part in every song, the guitarist in the band showed me barre chords and I learned to play rhythm on a song by song basis. I sincerely think guitarists should learn barre chords before open string chords.

Then when saxes fell out of favor during the psychedelic years, I learned bass. 4 strings and the same interval between strings.

As time passed I picked up flute, wind synthesizer and keyboard synthesizer (I don't play piano as my left hand can work the joystick and wheels of a synth, but is pretty dumb on the black-and-whites).

A few years ago, I got serious about the guitar, bought a Mel Bay book and started to read music. Now I play very decent lead guitar for rock, blues, country and light jazz songs. I'm still learning and getting better all the time too.

While reading music and learning music theory is not necessary to learn how to play the guitar, this is the way I feel about it.

1) Learning to read and music theory slow down your learning at first, but give you a better understanding of music and how to make it

2) After the initial slow period, knowing to read music will catch you up to where you would have been had you not taken the time and from then on you will learn much faster than you would have if you didn't learn to read and music theory.

Insights and incites by Notes

I started on bass, a friend started taking lessons at $10 an hour and offered to teach me that weeks lesson for $5. SOLD! that lasted 2 months then I got a guitar and the Mel bay books for both guitar and bass. I essentially taught myself but with all the bad habits I have/ had I never got better than decent. Some guys pick up things easy, not me and I made it harder by not sticking with formal lessons.

Get a decent guitar and a good beginners book. START at page 1, do every exercise and learn power chords and scales. RECORD YOURSELF 1 X A WEEK AND LISTEN TO THEM EVERY 2 MONTHS TO SEE YOUR PROGRESS. If you don't you will be more likely to give it up, thinking you aren't making progress. Work on picking clean and accurate while building your left hand dexterity. Pick other players brains and get feedback on your playing from them. Most of all DON'T STOP! Building chops takes a lot of time and dedication.

I second with the game rocksmith. I started looking up books at a guitar center and the people who work there are more then happy to show you how to start. But the game rocksmith/rocksmith 2014 really helps you at the beginning stage. But if you can't get to that game start with learning the part names of the guitar, basic open chords, steve stine has some good beginnger exercise

I did what most people most likely did and got some lessons. On top of those lessons however I did some other things. After learning the basic scales and a couple chords I would throw on a backing track and just start soloing, or at least attempting to solo... and as the things I heard went well and I liked what I heard, i would just write those little riffs or different little patterns down. I still have most of these scribbles to this day. I would highly suggest you do something similar, just play what comes to you once you have a basic understanding of scales or chords. I found another place that you could find some more ways to learn, mostly out of books. http://www.topguitar.us/how-learn-guitar-fast/ Hope it helps!