Skip to content
Menu
Forums
Guitar Discussion
Guitar Players Disc...
It wants to be a Le...

..but I don't know what it is. Hi, all. Hate to be the guy who joins a forum for the purpose of asking a specific question. That said, I have a specific question :) Anyone have ay idea about this one? I acquired it about 10 years ago from a former boss. He had no information about it whatsoever, as it had belonged to a college roommate who flunked out and left everything behind. There are no serial numbers that I can see ( at least ones that hadn't been shellacked and painted over). It's pretty beat up, but still plays very nicely. It's a hollow-ish body, and about twice the normal thickness of an actual les paul. The neck looks like it may be authentic Gibson. Can't tell about the body, but the age of each seem to match. The tuners are bona-fide vintage Grovers - this much I can verify.Note also the wacky position of the pickup selector switch. I should also note that there are NO electronics access panels whatsoever. I may have one put in. I have a luthier friend that I'll be taking this to once my wallet says it's ok, as I want to be playing it regardless of it's true origins, but I'm still really curious as to what exactly I have here. Any ideas? 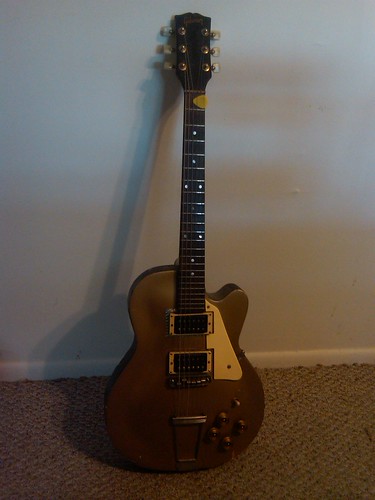 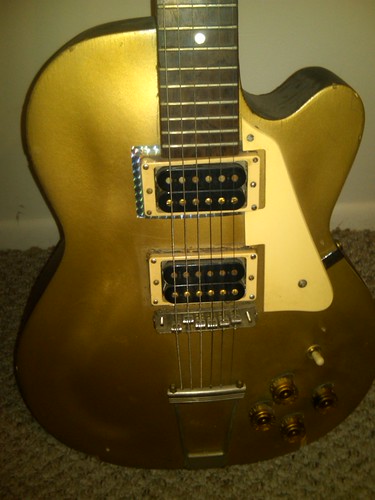 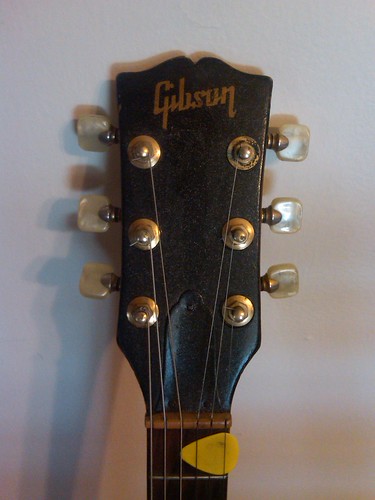 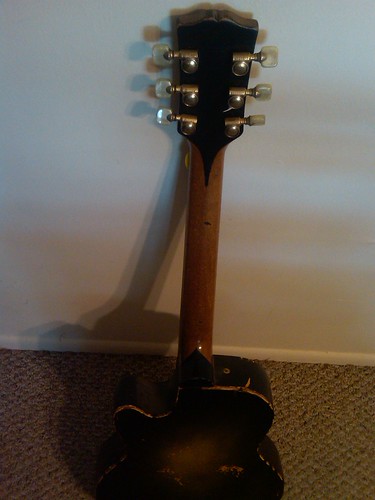 With the pick selector down there it's clearly a strat.

Thanks for the input, but it's hardly a Les Paul, much less a Strat.

Headstock looks almost, but not quite Gibson-ish. The three screw truss rod cover is a simple clue it isn't true gibson, though. Inlays on the fretboard are...amusing, though not right. ;-)

Add the oddly placed electronics, and the body thickness- I'm gonna say we're looking at a vintage not quite realistic knockoff.

I'm saying Asian in origin, but I could be wrong.

I'd head over to the forums at http://www.vintaxe.com and see if they know anything...

And welcome to GN!

Thanks for the input, but it's hardly a Les Paul, much less a Strat.
Yep, just joking, should have added the :)
Interesting that it's hollow body, but with no sound hole. Though maybe there's a hint on the top side that one's been filled in?

All I know is thats its pretty cool!!!!

Defenly looks to be a archtop semi of some sort... Maybe some off brand jazz box that someone made to look LPish... I think I would be stripping that finish that clealy looks redone, and see whats under there. Im betting it had F holes, and P90's in it at one time. DEFENTLY would be a awesome project guitar if I found it. I like it. :D

I agree its pretty cool- 8)

I've never seen one but it's nice. Unique hollow guitar. 8)

It's not an Orville by Gibson, or a Tokai, it's a wild one!

Whoa, how's the intonation on that A string? :shock:

Whoa, how's the intonation on that A string? :shock:

Thanks, all, for the feedback. Been insanely busy, and haven't had a chance to get back here until this evening. The plot (possibly) thckens, however. Removed one of the pickups a little bit ago. Found the body to be filled with strips of foam padding - I assume to reduced the amount of wood vibration for more electric sustain). On the back of the pickup was a patent sticker . Looked up the number ( 2,737,842) to find this patent, filed in 1952 issued in 1956 ( yes, even then, our government was just as efficient!). http://www.google.com/patents/about?id=zDxcAAAAEBAJ&dq=2737842 . Intriguing...

This article describes the patent sticker precisely - black, with gold lettering, plus the fact that the patent @ was applied to Les's bridge and tailpiece design. This is getting wierder!
http://home.provide.net/~cfh/paf.html

Took the "stuffing" out and popped the jack back out through the hole, slapped a nut onto it, and plugged her in. She sounds gorgeous. Some intonation issues (yes, even after adjusting the bridge), but I'm confident that post-repair and setup, this won't be a problem. While I was in there, I looked around for any other distinct markings, but there were none to be found. I'll say this, though - if it's a homemade, it was done right, especially considering that the neck's not a bolt-on. Original Gibson humbuckers don't hurt either! Only really one question now...I'm on the fence about having an access panel put in. Without it, it's pretty much impossible to do any work to the knobs, switch or jack without taking the back off. Still, I hate cutting a hole in vintage wood. Thoughts?

Have you put a mirror in to see if there are any f-holes that have been filled? There may even be an access point that that has been covered over.

I don't think that you can even begin to see what you've got until that awful paint job is consigned to history.

The foam will have been to stop feedback - a real terror for archtop players. This is why the semi-solid came into being.

"Headstock looks almost, but not quite Gibson-ish. The three screw truss rod cover is a simple clue it isn't true gibson,"

Take a look at a Gibson antique guitar website, there are all manner of Gibson headstock styles. I would reckon that the current headstock only came into being when Gibson protected the design. Up to that point, anything seems to have gone, especially on older models.
I'm not saying that it is a Gibson, just that the headstock is not, necessarily, a reason to discount it.

The trapezoid tailpiece looks pretty cheap as does the bridge (from the photos, anyway), so I'd tend to go with a knock-off of some sort - or maybe someone's cheap DIY redesign of a very old Gibby.

I would not be cutting any holes till you know what it is!!!!! Hate to see you hack something if it turns out to be something special!!! Its pretty defently a bad repaint on it... might want to lighty strip away the "new" finish and see whats under it. Agean... lighty is the key word... agean it could just be some early knock off... or maybe its something special that someone modded back in the day to fit what they were playing. I would want to make sure my ducks were in a row before I would make any major changes.