I've been borrowing our bass player's Gibson acoustic/electric when we needed to play acoustic shows, but our bass player has moved on so it was time to acquire my own plug-in electric.

I opted for the Epiphone J-160E John Lennon, in part, because I always dug the look of the J-160s that Lennon and Harrison played. I like that they have the volume and tone knobs on the front, rather than a little control panel on the side. I would've been just as interested without the little John Lennon signature on the body, but the big appeal was that it was the guitar Lennon played "I Feel Fine" on.

It's definitely still in the trial period but I used it for a short acoustic show last night and it seemed to sound good, played smoothly, no feedback problems, and so on. I'm a little concerned about the tuners because I feel like I'm having to tune it more than I'd like. That said, I've only had it for one day.

I was also hoping I'd notice a marked improvement in acoustic tone over my previous, cheaper Ibanez acoustic that I've had for 15 years or so. Perhaps my ear's not as discerning, but I think I still need to get used to the tone to decide if I'm in love with it.

I need to change out the strings from the manufacturer too.

It's a beautiful guitar! Sunburst finish and pretty knobs on the front. I would've loved to get the Gibson version, but at a cost of $2800 vs $500, it would've taken a lot more saving up than I wanted to do right now.

Congrats on that new guitar!

And upload some pictures! It seems very cool!

Thanks! Here's a cell-phone pic I just snapped: 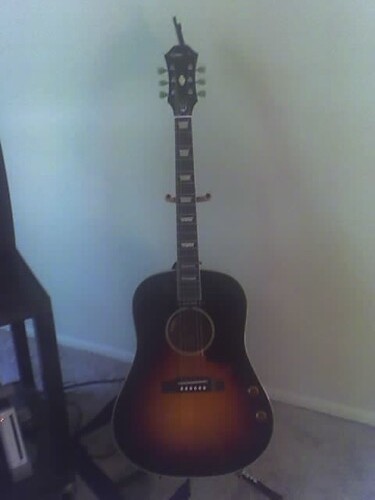 wow. that is beautiful. re: tuning alot...maybe the strings are new and were stretching.
I can come over and pick it up, bring it home, and check it out.... :wink:

Wow, what a generous offer, dogbite! :)

I'm definitely going to change the strings pretty soon, I dunno what brand they shipped it with. If that and some time doesn't help the tuning, I'll take you up on your help :)

Enjoy it, Progressions. I have a friend who's more than a bit of a Beatles nut, as well as a good player. He's had the Epi version for years and loves it.

"The only way I know that guarantees no mistakes is not to play and that's simply not an option". David Hodge

Progressions... and now... you know, the sound clips! :mrgreen:

Well we all shine on--like the moon and the stars and the sun.
-- John Lennon

Wow, what a generous offer, dogbite! :)

I'm definitely going to change the strings pretty soon, I dunno what brand they shipped it with. If that and some time doesn't help the tuning, I'll take you up on your help :)

I'm almost got one of these years ago knowing I would have to convert to left-handed but they were out of stock. I have an Epiphone somewhat like this only it's all acoustic.

Congrats on the nice looking guitar. You should be able to pull out the tones you like with your tone controls on your amp. Probably just take some experimenting.

I recently picked up a Casino on EBay, this is the first Epiphone I've ever owned, although I owned a guitar like it years ago, not sure if that was a real Casino or not. Beautiful guitar. Mine also went out of tune a bit the first week but it has settled down. New strings need a few days to stretch and break in.

I really love the necks on these Epiphones, very similar to my Les Paul. It came set-up all right, but I purposely tightened the truss rod to pull the neck out very straight and lowered the bridge. I was able to get dead-low action without string buzz anywhere, I am thrilled. I can barre at the 12th fret or higher by just laying my fingers on the fretboard, makes for super-easy chording up high. Epiphone does a great fret job.

Give it a little time and experiment with your tone controls, you might get some amazing tones out of it.

If you know something better than Rock and Roll, I'd like to hear it - Jerry Lee Lewis

that's beautiful...does it have an electric style single coil pickup?

Wes, I have to say I am liking the neck on this acoustic, it is wider than my old Ibanez, and I like the feel.

Apparently the pickup is a Mini Humbucker pickup.

I'm gonna be leaving the new guitar home this weekend while I go off to the Kerrville Folk Festival. I'm dying to bring my new guitar, but it's out camping all weekend and I don't want to take any chances on its first few weeks :) Still, whatever guitar I'm using, it'll be fun to play with a bunch of other people all weekend.

Also, on the subject of tone, I plugged the J-160E into my Vox AC30, and got unacceptable levels of static when I turned up the tone controls at all. To get away from the static, my tone had to be almost completely on the bass side.

For our upcoming gigs, I'd been planning to plug it into the PA system. Would I need to use a DI pre-amp box for that?