Skip to content
Menu
Forums
Guitar Discussion
Guitar Repair and M...
How broken is this ...

How broken is this guitar?

Is it safe to paint this guitar?

My friend wanted me to rewire this guitar for his brother. Apparently when they were kids he vandalized it and now feels guilty. He also asked me about the numerous cracks in the body because he wanted to repaint it for him. I dont understand whats going on with this guitar it is supposed to be a yamaha pac 112j but the body is stamped pac-012 and it looks like it used to be blue.

My main concern is all the cracks. There is one on the volume and tone cutaway that runs along the face of the guitar and then down into the body. There are "ibanez style" cracks on each side of the neck part of the body. There are little cracks where the bridge cutaway meets the neck that dont seem to go into the wood beneath. Also there is a couple of troubling long cracks along the back of the body the length of the guitar.

The guitar doesnt seem buzz, rattle, or flex. Im kinda assuming this is just a paint and minor abuse issue but i wanted to get some opinions before trying to refinish this thing and possibly wasting a lot of time. Any suggestions? Seems pretty superficial to me, wouldn't worry about it.

Then again, I'm not necessarily very good a source for this kind of advice as I don't worry about small dings etc. on my guitars. I let my kids play with them and generally often just have them lying on the floor when not used. Just a while back I stuffed a piece of wood behind a floyd to jam it down, but with a bit too much force, with the result of cracking the whole part between the floyd recess and the bridge pup clean off.

Just glued it down again, good as new :-) it didn't much lessen the looks of the guitar either, as I didn't like it as it was originally so I just ripped some 1/2 inches off its sides with a power saw...didn't bother sanding down either, and also ripped off the pickguard and such, and just used a few assorted metal bits to hold the necessary parts down.

It was just a Squier Classic Vibe or whatever so I didn't worry about mauling it...now it's a much better guitar and finally rocks! 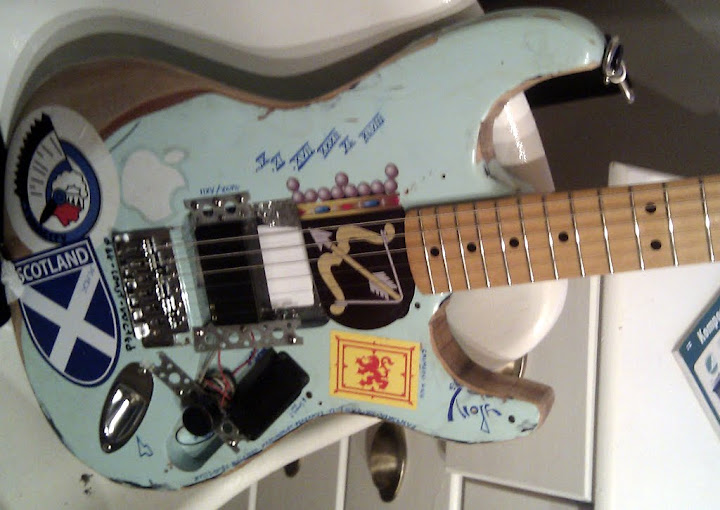 Hmm, yeah, it would be different if it was just one of my guitars. I swing them around like a samurai sword and stuff. I just didn't want to paint this one and put it back together then two weeks later it explodes into like 8 pieces. Actually that would be cool and I could just glue the pieces to a plank of wood and call it art. Guess I cant really lose .

Yep, look superficial to me as well.

Is it safe to paint this guitar?

The guitar doesnt seem buzz, rattle, or flex. Im kinda assuming this is just a paint and minor abuse issue but i wanted to get some opinions before trying to refinish this thing and possibly wasting a lot of time. Any suggestions?

I would say it's safe to paint it. It looks like it is as you say a minor abuse issue.

Are you planning on stripping the old finish before repainting? If so... and IMHO on that you you should.. once you get it stripped, you will get a better idea on the shape of the wood body. At that time if its cracked, you can glue or fill any issues, and paint away! I doupt its to bad that you cant fix it. After glue/fill, it will be as good as new.