Just thought I'd share what I did to my old Yamaha RG...it had a bad floyd, which I don't use anyway...and been already de-painted and such...lost 2 pickups...lots of dings and fret wear...kinda a junker but with a great albeit dinged neck: 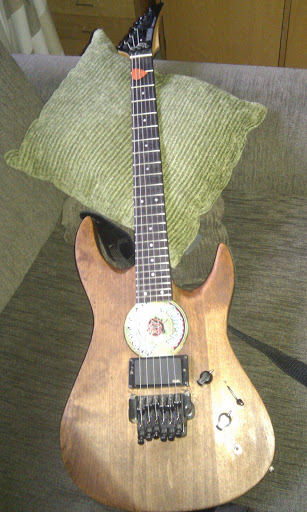 So, I wanted to make it look nice and most importantly make it a hardtail; here I have a bridge for it: 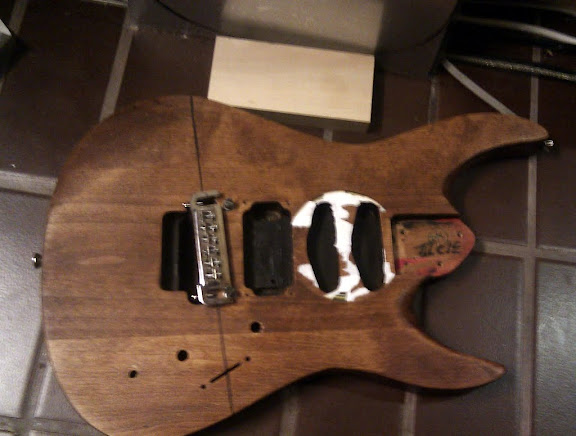 Sanded the neck down, removing the dings and gave it a fret level which it didn't really much need except to remove wear, and recrown and polish...also gave it a very slight V shape, thinning it under the thumb some: 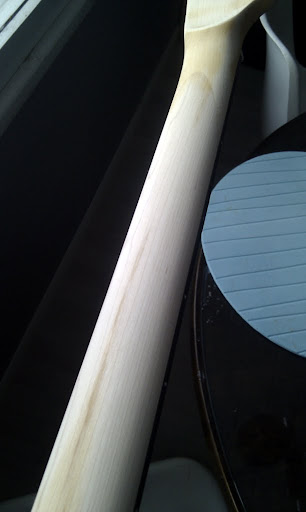 The headstock looked funny to me so I re-shaped it. 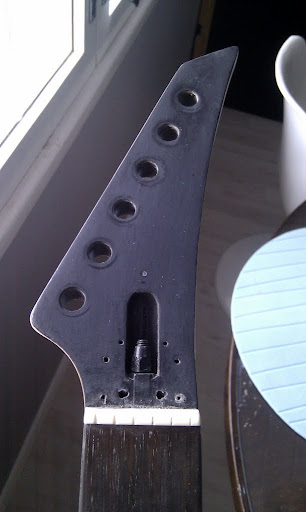 Then I glued in and hammered to shape a nice thick aluminum sheet...of course first I routed out the floyd recess and glued in a nice big slab of wood to make it hardtail...

From then on it's been easy...some sanding and FX painting and installed the bridge studs properly as well as pickup (EMG85) plus electronics (including an EMG-PA-2 preamp): 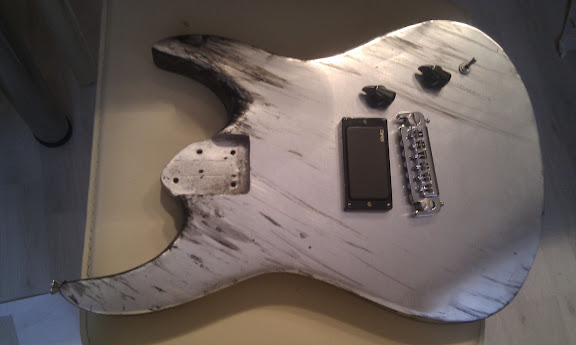 The backside...I have also installed two strat trem springs hooked on each end of the old trem cavity, because the springs there give it a nice ring acoustically: 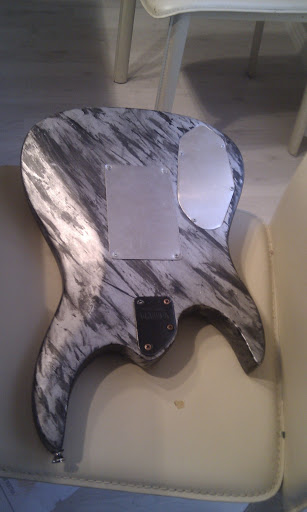 So now it's ALMOST finished...but I like nitro lacquer on the neck, and it takes aeons to dry and re-spray and then needs to be properly buffed...but soon it will be done and I'm expecting this to be one of my favorite axes.

I just love doing these nice renovation projects! Easy enough to do at kitchen table while minding kids but yield great results.

Thanks...can't wait to get to adjusting it. Did I get the bridge positioned right? And most importantly, how does the bridge curvature fit the fretboard curvature? I tried to take that into account when I did the fret leveling & crowning but still, that's the key issue here, as the original Floyd was more flat naturally than the new bridge system is. That's what interests me the most, will I have to make the fretboard surface even rounder or eventually even do a complete refret and adjust the curvature by fine-sanding the fretboard surface to shape.

I'll post some info later on when I get the neck installed & the whole thing set up!

I have built a couple lap steels. once I repainted an old electric. I have to say you are a brave man putting a sander to a neck to alter the shape. props. 8)

Well this time it was a must, there were a few such deep dings in it it had to be sanded pretty heavily.

The first time I did that, though, was with this U-shaped Charvette neck...early 80's and totally sharp---I really don't like U's, I don't mind a thicker neck but i's gotta be kinda 'V' then...I want to get my thumb close to the fretboard under them low strings. So I sanded it to a V shape pretty heavily, and it turned out superb...since then I've sanded a couple more necks already to my liking. The only hassle is to properly lacquer them afterwards.

Anyway, I'll get it put together tomorrow and I'll have pics and first review then, can't wait to hear how it sounds!

Just some more fine tuning to do; intonation that is is a tad off. But, other than that, plays just like it used to, or actually a little better. Very light, balance is perfect, action can be set lower than I'd ever want it to be. Not yet tested with a good amp but initial tests show a very nice sound and lots of sustain.

I put some images up to Picasaweb, plz check them out there!

the chicken knobs at first looked funny. then I see that they are nice and pointy; it fits the design well.
props man. nice build and finish.

I really like that finish. It's purdy :D Great job man!

Really keen to hear the sound yet amplified, but I suppose the aluminum gives it a little extra 'ring' and liveliness at least unamplified.

Acoustically it sounds much like my very similar 'Davette'; what governs the overall sound is the light but hard woods & thin neck, which likely are what give the both a light style sound as well, clearly brighter than heavier guitars, and the very sturdy construction (really tightly seated necks and hardwood bridge insert blocks and bridge studs very tightly jammed in place) give them a solid sustain and a ringing low end as well. One might say that they sound naturally 'scooped' when compared with the SG or even Strats, more low and high end than any of them. Only the 1-piece all maple-neck Squier comes close to similar top end, but the tilted headstock and bridge give these guitars a special tightness to the sound, while the Squier retains some of the lax 'twang' of a strat.

The scale; Fender on Davette and Gibson on this one, seems to have surprisingly little effect on sound unamplified. Other than scale, string width and the aluminum instead of paint the two are rather identical in weight, structures and hardware now.

The Fender scale does give a bit snappier feel and sound to picking ballade passages etc. but the difference is not as big as I expected, maybe because the wider string spacing makes picking even with fingers easier.

But, I'm expecting that has more impact on amplified sound...very interested to hear if I can detect any differences I'd guess come from the aluminum top. My guess is, there will be none. While I can more like 'feel' a clear difference between all my guitars when I play them, listening back to having recorded them, I don't think there is really any real difference.

All electric guitars sound pretty much the same on record, if they have same or very similar pickups, really, and are generally well made & decent materials so there is nothing clearly wrong with them. String gauges make much more a difference to a sound than woods or anything else regarding construction.

Basically, it sounds just like any of my guitars, BUT there is this incredible sustain to it, and it's accompanied by a very very good clarity of chords. Hard or impossible to describe, but the guitar really does both scream like a mutha and also provides very very clear chords at nicely gainy sounds too. You know, you can hit a 6-string chord and pick individual sounds over that and everything is clear despite plenty of gain. It's very similar to the 'Davette' I built years back with the exact same princples but without the aluminum top, which may be the source of that crazy sustain, I'm not sure. But the Davette is similarly very clear-sounding even with plenty of gain.

I wish I had recorded this with something better than the cam's crappy mic---but anyway here's a clip of it in the action.

Oh man! Beautiful job!!! It looks and sounds great. You almost have inspired me to start work on my guitar. I have only been sitting on it for a year or two. Done an easy half dozen different projects in the mean time. I like your amp by the way. I used to have a Marshall JCM900 but traded it long ago. I currently have a Peavey Windsor which is nice but do at times wish I had kept the Marshall. What is the guitar down in the lower right corner of the video? Same inlays as my Epiphone EM2.

Yep Marshalls are funny amps...now and then you get soooo fed up with their sound. It just happens. We cut a record using a JCM900 for the 2nd guitar in 2008 - many people don't dig them but I liked it fine. I've owned several Marshalls and sold them off later, and ALWAYS regret it later. It's strange. I just need to understand that no matter how much I may get tired of their sound, they still always rock when you look back to what you did.

I love this JVM; it's likely the hardest amp to adjust to your liking there is...took me a week to get it even in the ballpark, felt really cold and stiff at first, but when you start learning how to dial it it, it's a really really cool amp.

And that guitar, it's an Epiphone Prophecy SG which started life as a GX model but I've modded it pretty heavily since. Really nice an SG, likely the only guitar I ever had I actually feel quite OK playing past 15th fret too no problem...much preferred it to any normal Gibson SG's I tried before I bought this.

Makes sense, my Epiphone EM2 is a Prophecy. It is the low end of the Prophecy line but I love it.