Forums
Your Opinions
Opinions and Polls
The difference betw...

The difference between a guitar player and a musician.

A musician plays the song.

What do you think?

At the risk of nipping a conversation in the bud, can this question be considered anything other than a "let's see what side of the fence I can stand on" discussion?

A musician, by definition, is:

1. a person who makes music a profession, especially as a performer of music
2. any person, whether professional or not, skilled in music

Now "skilled" is one of those words which may make the discussion more interesting, but for the moment let's just set it aside and make the obvious conclusion - a guitarist plays guitar and is therefore making music, so therefore the guitarist is a musician. Why create a "guitarist but not a musician" category unless you want to some how set the guitarist apart from (and, the usual slant of these discussions is usually to mean "above") musicians in general. That seems incredibly silly unless the whole point is to glorify the guitarist above other musicians. And, at least in how the vast majority of musicians (guitarists and otherwise), that mentality is totally against what music, and the creation of music, is.

Now lots of amateur or casual players will sometimes doubt that they are musicians for any number of reasons - from not having formally studied music to not reading notation to not making any money as a musician. But in my mind, that doesn't mean that they're not musicians. They're simply musicians on a casual level. And the world, thankfully, is happy to have as many of these people as it can. Most of the musicians in the world do not play for anything other than the joy of making music and sharing it with their family, friends and whomever should happen to be listening. Why should life be otherwise?

Guitarists should always think themselves musicians. That's one way for them to be both better guitarists and human beings.

My point is some guitarists are so busy wanking on their guitar they don't help make the song better with good parts and sometimes not playing at all. All good guitarists are musician's first.

For our European readers, "wanking" is an American word which means "Shredding".

Fernando Sor, 200 years ago, differentiated between people who play the guitar and people who just play notes, but I think it's wrong to describe someone who plays any piece of music on a guitar as not being a musician; to do so trivialises the effort that's gone into producing that interpretation.

My point is some guitarists are so busy wanking on their guitar they don't help make the song better with good parts and sometimes not playing at all. All good guitarists are musician's first.

If that was your point, why not say it directly? Makes life a lot easier.

Guitarists are people and guitarists are each to their own personality. There are certainly any number of guitarists (and piano players and drummers and accountants and florists and plumbers and whatever profession / calling you'd like to name) whose personality is totally self-absorbed and who aren't interested in input as much as they are interested in validation for who they are, what they do and what they think. Are they musicians? Yes. But they don't have to be musicians that you like (personally or professionally) or want to work with.

Hopefully the musician in them will grow and evolve to the point where he or she realizes that the world is a much more interesting (and fun!) place when there's collaboration with other musicians. One of the biggest challenges for musicians who are already in that mindset is to be able to help guide those who aren't there yet to a place where they learn and appreciate all that being a musician involves. Merely dismissing a "guitarist" (by your original definition) isn't helpful to either you or him (or her). Why not help these guitarists become, again by your original definition, musicians? That would be the optimal solution.

Sorry if I was confusing. You're right dhodge, I should have just made my point.

And sorry if it seemed as I was putting down "guitarists" but this is a guitar board so it seemed that was the context. But yes any instrumentalist can over-play and not help the song.

I guess I was just trying to start a discussion.

Well I'm one of those guitar playing non-musicians and proud of it! :D

"It's all about stickin it to the man!"
It's a long way to the top if you want to rock n roll!

A musician plays the song.

What do you think?

Well, that's my story and I'm sticking to it. 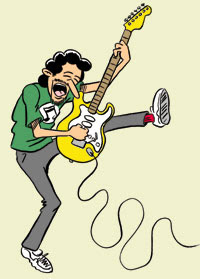 Playing guitar and never playing for others is like studying medicine and never working in a clinic.

There are great players who can't tune a guitar, there are musicians steeped in theory who can't whistle a tune. Some people get overly concerned about who deserves talent and why they are successful. When I was about 16 people started telling me I was the greatest bass player they ever heard. If believed them I probably wouldn't be any good musically today. I figured out than that music isn't competitive.

The thing is... is a person that is a born talent... catches on fast, and thinks, and understands music... picks up a guitar, and noodles around at it, but just starting to learn... are they any less of a musician because they are just starting out and learning to use there gift?? Would they be just a guitar player [or drummer, or bass player, or whatever...] because they are learning other songs, or following tab, or sheet music?

We are all at different rungs of the ladder. That guy hacking away fighting over some tab for some modern song... he could be on his way to being a world class multi interments musician.. That guy that you see just blowing the crowd away at a show... he might just be very good and copying and piecing together stock riffs, and had maxed out at the skill level he is at. You are only looking at a small window of time in the player’s musical life. The point he is at now. you cant see where he is going, or where he came from, so no.I would never try to class someone as just a guitar player...because whether he as reached his potential or not, he is still a musician.

We are all at different rungs of the ladder.
I like to think of it more as a climbing wall...

Me because I'm not good enough yet for audience

Was this post directed or inspired by seeing a certain guitarist? It just seems like rather than pinpointing a particular person (or even group of people) your pointing in some kind of vague direction that leaves us all unwittingly in the dark. So who are you talking about these people who are guitar players but not musicians. Are you talking about Joe Satriani and Steve Vai? I can't fault them as guitar players or musicians....

Download a bunch of cheat sheets and posters: http://stevesmusiclist.com/

Latest Post: When You Are Ready For An Upgrade On Your Guitar? Our newest member: joy2022 Recent Posts Unread Posts Tags