To quickly review from my Introductory Lesson, the I – IV – V7 chords in the key of G are G Major, C Major and D Dominant Seventh (G – C – D7). Here are the chord diagrams on the 5-string banjo for these 3 fundamental chords in the open position:

If you have these basic changes down, you are ready to tackle some real picking and some closed-position, movable chords. Let’s begin by reviewing the tablature system as it applies to the 5-string banjo.

Note that the tablature indicates the tuning of the five strings, as discussed in the first column. Just as with guitar tablature, notes are indicated by showing the fret number to be played on the particular line or string. A zero indicates playing the open string, and you’ll find there’s a lot of that in banjo picking.

Five-string banjo, played in the bluegrass style, uses the thumb, index finger, and middle finger of the picking hand to pick the strings. Almost invariably, bluegrass banjo pickers use a thumb pick (usually plastic) and two fingerpicks (metal). There are lots of lively discussions about the advantages and disadvantages of particular brands of picks, but I won’t get into that here. The main message I have at the outset is to get used to wearing picks at all times when picking the banjo. If you’re not used to them, it may be tempting to play with naked fingers, but the sound and feel you get is entirely different and this won’t help you get where you want to go.

Another important aspect to discuss at this point is anchoring your picking hand by placing the tip of your pinky and/or ring finger on the surface of the banjo head. This stabilizes your hand and gives you a point of reference to help you hit the correct strings. Many players recommend anchoring with both the pinkie and the ring finger for maximum stability. But many others are quite successful anchoring just one or the other. Here’s a photo showing my hand in place on the banjo as I am preparing to pick: 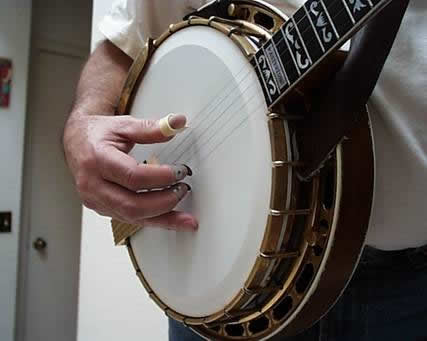 Another tip for you: always use a strap, even while playing seated. Because of the round shape of the banjo, the neck has a tendency to slide down toward the floor due to gravity, and if the strap doesn’t support the neck you end up having to support it with your fretting hand. This creates tension and bad hand position. I repeat: ALWAYS use a strap. Adjust the strap so that the banjo is in the same position relative to your body whether you are sitting or standing.

Here’s an MP3 file so you can hear what this sounds like.

Note that I have indicated which finger to use to pick each note (Thumb, Index, Middle). This is useful at first, but before long the finger to use will be apparent, and the letters won’t be needed. Most of the tablature you are likely to encounter won’t show the picking fingers unless there is a particularly tricky passage.

These picking patterns, which banjo pickers generally call “rolls,” are often given names to characterize the pattern and aid in communication between players. For example, the roll above is called the “alternating thumb roll” because the thumb bounces back and forth alternating between playing a melody note on the third (or fourth) string and a drone note on the fifth string.

One of the most difficult aspects of learning bluegrass banjo is bringing the melody (or other important) notes out and making them heard above the barrage of other notes that typically accompany the melody. This is widely neglected in the teaching materials I have seen. I want to help you relate to this from the outset by showing you which notes to emphasize. In standard music notation, an accent mark is placed above a note to be emphasized, and I like to follow that convention. Here is the simple alternating thumb pattern with the appropriate accents shown:

Play this pattern over and over at a slow and steady pace, putting a little extra “punch” on the first note of each four-note group. Because the thumb is the strongest finger, we try to use the thumb whenever possible to play melody notes to make it easier to bring the melody forth. But there is a paradox here. The thumb is also used to play the fifth string exclusively, and you generally want that fifth-string drone note to be subdued. So you need to concentrate to make the melody notes stand out, and yet maintain a delicate touch on the fifth string.

Here’s an MP3 file illustrating what we’re after:

Once you have this pattern working smoothly, try changing chords while keeping the pattern going. Start with the open G, then switch to C, then back to G, then D7, over and over. Here’s what this looks like in tab:

Play it nice and steady, at a pace you’re comfortable with, over and over. Remember to keep your picking hand anchored and don’t forget to practice wearing your picks – you’re only cheating yourself if you don’t. When you have it down slowly and smoothly, pick up the pace a bit. Here’s what it sounds like at a medium speed:

Of course you can vary this basic roll in numerous ways. As a simple example, take a look at this:

We end the tune with a pair of half-notes – the third string open, and then a “pinch” where you simultaneously pick the fifth string with your thumb and the first string with your middle finger.

Practice this piece over and over until you can play it smoothly and steadily. It should sound something like this:

Although it is a lot of work, I am enjoying putting these lessons together, and very much appreciate the feedback I’ve already received. Please drop me an email at [email protected] if you have any comments, questions or suggestions. Next time, I’ll show you how to play simple rhythm backup, and introduce you to the all-important closed major chord positions that will allow you to play all over the neck in any key.

Let me close this lesson with an improvised bit of musical doodling based upon the information in this lesson, just to stimulate your imagination. I encourage you to experiment to see if you can incorporate similar sounds into your own playing. Listening and stealing bits of what you hear is an extremely valuable element of your musical education, and certainly a part of the “oral tradition” of folk music and bluegrass.