The Long and Short of It – Scale Length Explained

Tony Nuccio Guitar Lessons Buying a Guitar and Other Equipment

Although it’s very rarely considered when buying an instrument, the guitar’s scale length (or neck length) is an integral ingredient in shaping an instrument’s tone and playability. Scale length has nothing to do with playing scales and everything to do with the length of the strings from the nut (that white thing the strings go over, up there by the headstock) to the bridge. Why does the length of the strings matter? The scale (length) of the neck (and, ultimately, the strings) determines two major aspects of a guitar’s personality: the distance between the frets, and the tension (or tightness) of the strings.

The distance between frets is calculated by some logarithmic formula that I have absolutely no clue about. Luckily, it’s not really important unless you’re building your own neck from scratch. In a nutshell, the shorter the scale length, the closer the frets are together.

This is a good thing if you have small hands or are a young beginner. Also, many rhythm guitarists, like Elvis Costello, John Lennon and Kurt Cobain, prefer (or preferred) shorter scales when comping or chording. On the other hand, a longer scale length comes in handy when shredding and playing leads in some styles (like those of Malmsteen, Vaughn and Atkins) because it keeps you from “tripping” over your own fat fingers when getting all acrobatic.

Scale lengths can vary as much as three inches from the shortest to the longest, and that doesn’t even count basses. So you can see how that variation can affect a guitar’s “feel.” A guitar’s feel is also affected by the tension of the strings. A guitar with a shorter scale length (like the Gibson Les Paul) requires less tension to reach concert pitch than a guitar with a longer scale (like the Fender Strat). This is true, as long as both are strung with the same gauge strings. One advantage of less string tension is a “looser” feel, making bending and vibrato more fluid.

So, then, why aren’t all guitars built with a shorter scale? Obviously we’d all benefit from that slinky feel, right? Well, guitars with greater tension benefit from a “tighter” sound due to better clarity in their higher overtones. This is often referred to as “twang.” Shorter scale guitars also have trouble accepting heavier gauged strings because the slackened tension causes wider vibration and fret buzz.

All this falls into the category of “tone.” Why doesn’t a PRS Custom 22 sound exactly like a Les Paul? They both incorporate dual humbuckers and a solid body, so they should sound the same, right? However, the PRS has a longer scale length and, therefore, a tighter, somewhat brighter, sound. Shorter scale guitars, though, tout that beautiful buttery tone which make Les Pauls and Jazz boxes such invaluable tools.

Now that you have a bit of neck length knowledge, get out and play some different model guitars to get a feel for what all of this means.

Here’s a chart of some common models and their scale lengths to help you along. Good luck on finding that next “special friend.” And, when playing guitar, remember that, just like in life, it’s always best to stick your neck out, no matter what the length. 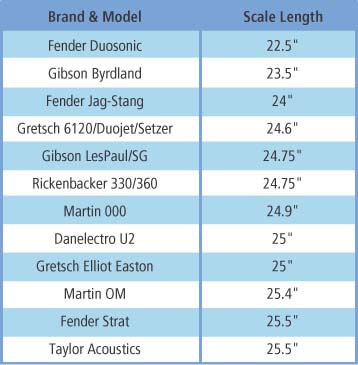