What to Look for In An Acoustic Guitar

A-J Charron Guitar Lessons Buying a Guitar and Other Equipment

A guitar must be made of dried wood. If the wood hasn’t lost it’s moisture when the guitar is made, it will eventually end up crooked. And I’m not talking 1 millimeter here.

In the old days, they would let the wood dry up for three years before starting to carve it. Nowadays, most Luthiers use a technique called kiln-dry. This consists is placing the wood in huge vats filled with chemicals that treat the wood in three weeks.

Purists will tell you this method is no good, but you shouldn’t be able to see the difference.

Now let’s look at the various parts of the instrument you wish to purchase. 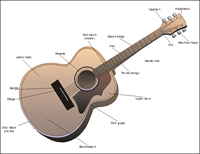 This is probably the most important part of the guitar. Most people, and many guitarists among them, tend to believe that the way the sound is produced from an acoustic is that the vibration of the strings is sent into the soundhole, amplified inside the sound chamber and sent out again through the soundhole.

Part of this myth is due to the fact that removable pick-ups for acoustic guitars are placed inside the soundhole. If you’re going to use a pick-up like this on an acoustic, you might as well use an electric as the sound will be just about the same.

Now this is not the way an acoustic works at all. If it were, you couldn’t get any sound out of a violin or a cello-or many guitars, for that matter-as the soundholes are “f” shaped on the sides of the strings. 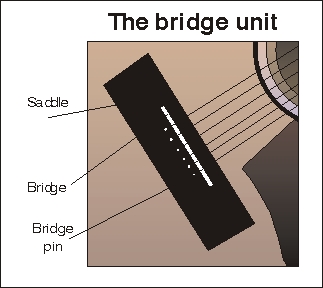 What actually happens is that the vibration is picked up by the bridge (not the whole unit, but the part where the strings touch) and is transmitted, through the bridge unit, into the sound chamber. The vibration is then amplified using the chamber arrangement, bounced through the struts (usually fan-shaped for classicals and box-shaped for acoustics), then pushed out from the soundhole.

Thus, the importance of having a good bridge unit. This should be the first thing you look at, even before taking the guitar off the rack.

In an attempt to save money, many manufacturers will use plastic for the bridge. If this is so, on the guitar you’re looking at, don’t even pick it up. Plastic will never give you a satisfying sound. And, due to the tension produced by the strings (the lower “E” string produces around 62lb of tension with light gauge strings), the strings will bite into the plastic unit and produced grooves, eventually making the whole unit worthless.

The bridge unit, on acoustic (electric’s are a whole different story) should be made out of wood. Specifically, Ebony. Ebony is a very dense, solid wood, but very rare and expensive. Other alternatives which are just about equally as good are Rosewood and Ash.

The white piece, the bridge itself, should also be made of a dense wood. Here, though, many alternatives will do and are usually to the manufacturer’s preference.

The whole unit is then firmly glued on to the top of the guitar, the soundboard.

A variety of woods can be used to produce the body. Often these are due to manufacturer’s preferences, but quite often to economics. You’ll occasionally see plywood being used. If that’s the case, a simple rule applies: don’t touch! A guitar is a precision instrument which must be made out of top-quality products.

Each panel is made from two different pieces of wood which are mirror images of each other. You should check this point. Just look at the grain of the wood starting at the middle and see if both sides (top and bottom) are mirror images of each other. If they’re not, then you’re looking at shoddy craftsmanship. Also, there shouldn’t be any knots in the wood. Sometimes you’ll find them, this indicates that the manufacturer is using a cheaper quality of wood.

The sides should be made from a third kind of wood. Again, different manufacturers will have different opinions on which particular woods to use. What it comes down to, at this point, is what you like.

An interesting concept I’ve seen, particularly from Yamaha, is to have a body that is unvarnished. The sound will not be extraordinary at first, but it will get better over time. The idea is that the wood is reshaped over time, according to the way you play and the specific sounds you produce.

I’ve never owned one myself because I can’t see myself playing this thing for two years waiting for the sound to improve. But I’ve known people who have owned these types of guitars and swear by them.

The rosette, the decorated part that runs around the soundhole serves partly to reinforce the sides of the soundhole. Not much is needed and it shouldn’t be an issue. Mostly, though it serves to decorate the guitar. This is a tradition that started off with instruments other than the guitar, thousands of years ago. It’s decorative, so you like it or you don’t.

As the sides of the guitar are made from two different pieces of wood (the end result being that it’s much more solid than if it were made from a single piece), these must be joined. Just putting them together and gluing them to the front and back of the guitar is not good enough, the whole thing would fall apart.

There is always an end block at the back of the guitar. You don’t even have to look for it. Again, this should be made of a dense wood. Where some manufacturers will attempt to save money is to not use one at the front. They figure that since the neck joins there, it should hold the whole thing together. Think again.

By holding the guitar with the neck pointing to the ground, you should be able to see whether or not an end block exists at the front. If you’re still not sure, loosen the string and place your hand into the soundhole and feel around, delicately. A good guitar is precision made so you don’t want break anything. Also, make sure your hands are clean so as not to leave any residue in the sound chamber.

If the salesperson tells you not to do that, then give them back the guitar and go somewhere else. You’re about to spend several hundred dollars on an instrument that will last you decades. You’re allowed to know what you’re buying and to not get taken for a ride.

On an acoustic, a neck must be glued on the body. If there is no end block at the front of the guitar, that usually means that the neck is assembled on to the body at the same time as the body is assembled. This might be quicker for the manufacturer, but is not to your advantage.

The body should be assembled separately and the glue should be left to dry for several months before the neck is installed.

Like on an electric, a variety of woods can be used on the neck. The neck should be in two parts: the neck itself and the fingerboard. Sometimes the headstock is a separate piece which is glued on; this shouldn’t effect the sound or quality in any way.

The fingerboard is usually made out of varnished Maple or Rosewood. Some people prefer Maple, others Rosewood. Essentially, Maple is cheaper, but will give you a fingerboard which will last forever. The Rosewood will change over time. If you feel the Rosewood fingerboard of a guitar that’s 15 to 20 years old (or more), you’ll notice the wood isn’t quite even anymore. Constant pressure on it, with your particular style of playing, will change it’s form and make it more suitable for yourself. But sometimes this will result in a fingerboard that’s too crooked and must be replaced after 10 year or more.

Finally, the butt of the neck (the part that goes down and joins with the body), should go all the way down to the back for stronger support.

All in all, when looking to buy an instrument which will last you most of your life, you should take the time to make sure you’re buying something good and something that you will enjoy in the long run.

Don’t get taken in by salespeople who don’t know what they’re talking about. If you’re not comfortable with the instrument straight-away, don’t buy it. Always remember this when you walk into a store: they want to sell, you don’t have to buy.

Between 2000 to 2005 A-J wrote over 300 articles and reviews for Guitar Noise. Many of them have been translated into other languages. A-J is a singer and songwriter from Montréal, Québec. In 2005, A-J left to begin his own music media website.