The VT-3 is a really cool stomp box from Guyatone. Remember, years ago, when you heard those old tremolo effects? Steady pulsing tones that could go on and on and created such a powerful atmosphere? You get this full effect from the VT-3.

Powerful, it is. The effect is amazing from such a little device. It sounds big, but it also sounds clean and clear, just as if it were coming straight from a vintage amp! Definitely a stomp box for the guitarist who puts a lot of effort into his sound. 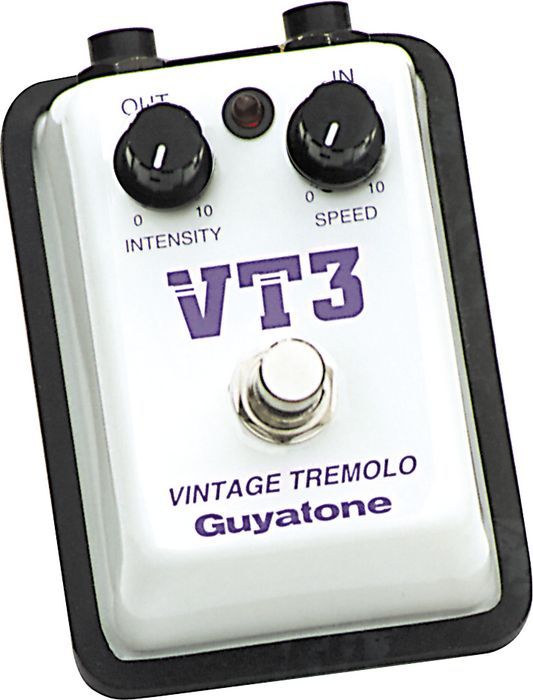 As opposed to some other units, where the tremolo effect is barely noticeable, you can’t miss it with this unit. When you press the button, the sound comes on and it’s all there… And the warmth of it…

And because it’s so clear, you can use just a light effect, with hardly any speed or intensity to it to add warmth to what you’re playing.

Controls are of absolute simplicity; no need for a sound engineering course here: two knobs only, intensity and speed. And why should it be more complicated because that’s all you need. The knobs are big enough that you can easily change the settings between songs or within a song at a very rapid pace.

And the unit itself is very sturdy, made of metal, not plastic! It works with either a 9 Volt battery (included!) or a 9 Volt adapter. One thing I really like about it is the way it’s designed for changing the battery: there’s a rubber piece that goes around the base of the unit. Just push it toward the top (and this doesn’t take a lot of strength) and the bottom comes off. Replace the battery, put back the bottom panel and place the rubber piece back into position. Battery replacement in a few seconds, no tools needed! Now that should be standard on any stomp box.

It is solid too. Even though the rubber piece is easy to take off and put back on, it stays firmly into place and protects the unit on the floor.

Always remember to unplug the “in” cable after use so that you don’t wear down the battery.

I also like the compromise made in size: It’s small enough that it’ll easily fit in your guitar case, yet it’s large enough to offer full comfort for stomping. And the swith is made of solid metal so you can really stomp this baby… When you hit it, it clicks, it doesn’t go in only part-way like with some other units.

Price? $75 USD. Worth it? Absolutely! You’ll be using this stomp box for years to come and won’t grow tired of it.