Memphis Minnie’s real name was Lizzie Douglas, birthed as the first born of thirteen children to Abe and Gertrude Douglas in Algiers, Louisiana on June 3, 1897. She and her family, relocated to Walls, Mississippi, just south of Memphis, when she was about seven years old, in 1904.

For Christmas in 1905 she received a guitar and swiftly learned how to play it, plus the banjo. She performed at local parties using “Kid Douglas” as her stage name. Lizzie ran away from home to play at Church’s Park for tips as a young teenager. She joined Ringling Brothers Circus and toured the South in the WWI era.

She returned to Memphis in the 20’s and its Beale Street blues scene, being discovered there by a Columbia Records talent scout in 1929, thus recording in the later part of the year as Memphis Minnie.

Accompanied by her second husband, guitarist Kansas Joe McCoy, her first song, Bumble Bee was a success. She recorded over one hundred sides before retiring in the late nineteen fifties. She composed hundreds of songs, numbered among them are Hoodoo Lady, I Want Something for You, Hole in the Wall, and Bumble Bee, which Muddy Waters later recorded as Honey Bee.

Her recording career lived through the various changes in the “blues style” for thirty years. Memphis Minnie swayed and impressed many important blues performers: Chuck Berry, Johnny Shines, Big Mama Thornton, and others.

In 1930, Minnie and Kansas Joe migrated to Chicago, where they speedily became part of the city’s expanding, blues scene. Minnie, Tampa Red, and Big Bill helped popularize the country blues style in an urban setting. In about twenty-five years, Minnie recorded for a number of labels, which included Vocalion, Decca, and Bluebird, and with talented blues men like Sunnyland Slim and Little Walter. For her recording sessions, Minnie employed a small combo or had a second guitarist accompany her.

Her health declined in 1958, which induced Minnie’s return to Memphis and retirement from performing and recording. She spent her latter years in a nursing home, where she died of a stroke in 1973. She is buried in New Hope Cemetery in Walls, Mississippi.

Memphis Minnie was inducted into the Blues Foundation’s Hall of Fame in 1980, as one of the first twenty inductees picked in the inaugural W.C. Handy awards.

For more information on this unsung guitar heroine, you can use the following references:

Nothing But the Blues: The Music and the Musician
Lawrence Cohn, Editor
New York: Abbeville Publishing Group, 1993. 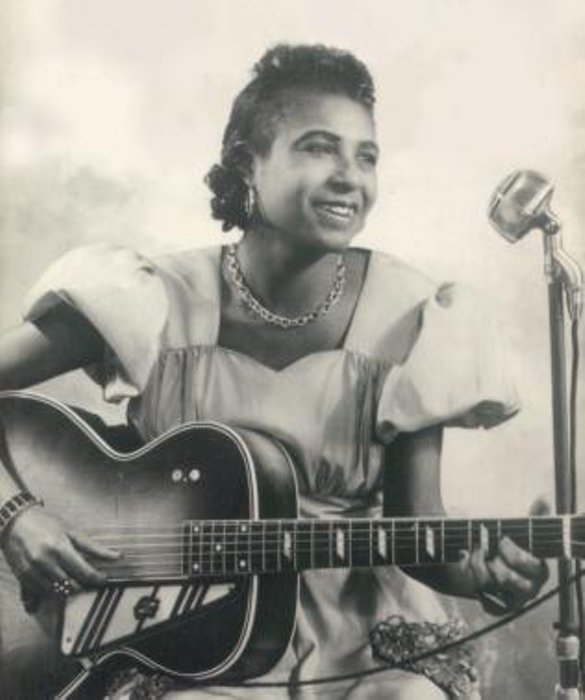