The Gear (and How to Keep it)

Many, many years ago, when I began playing gigs, I was notorious for being short on supplies and heavy on clutter. For years, I didn’t possess a microphone stand (or even a microphone), and was often short when it came to cords, extra strings, etc. Late in the first phase of my musical career, I took up slide playing. Unfortunately this involved open tunings and since I didn’t have a second instrument, I often borrowed a friend’s Sam Goody special. This way I avoided retuning several times during a gig. However I’m sure my friend got tired of me mooching.

I took a ten or twelve year sabbatical from playing, during which I got rid of every instrument, every piece of equipment, every pick. I didn’t have much to start with, so unloading didn’t take very long.

Then one Christmas, my wife bought me a beautiful Yamaha twelve-string acoustic. That started the current trend and before long I had a cheap Strat knock-off and a very small amp. More time went by and I became more and more involved in my rediscovered passion. And as I acquired more and bigger gear, I found myself falling into some of my bad old habits again. Fortunately, the internet was a way of life by then and it was simple to find resources to help with all the many facets of being a musician.

One very helpful and informative article I found here: Tips to Live and Learn By: On and Off the Gig. It lists many of the “can’t-do-withouts” that today’s musician should tote around with them.

But I still needed my own system; a way to help with the guesswork that confuses me at almost every gig. It’s one thing to have the gear, but if you can’t find it or it’s broken from abusive traveling habits, it doesn’t help. I’ll start with everyday space for my instruments:

Obviously, this isn’t a gig. But the stand I use at gigs won’t work in the limited space I have in my man-cave. There are a lot of expensive solutions out there, but simply anchoring a 2×4 into the wall and then screwing rubber-coated U-hooks into the 2×4 works perfectly for my needs. This keeps the instruments off the basement floor and the 2×4 creates enough of an offset to keep the instruments from banging on the wall. And since my music room also doubles as a tool room, no one has to trip over my babies when getting a hammer!

The Danny I use for open tunings. I had the local guitar wizard set it up especially for that. Problem solved for the old second guitar issues!

Now, on to the traveling purposes! Below I have my current method: 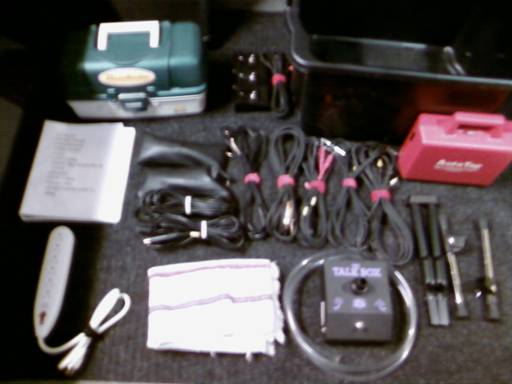 At the top right, there is a tote box purchased from the local home improvement center. It has a bright yellow snap-lock lid which makes it easy to find in a dark nightclub. The yellow-black contrast works very well; so much so that transportation officials adopted that scheme for many road signs. I decided to adopt that as well, so I use yellow friction tape to ID my cords. It makes them easy to see, and no one can walk off with the wrong cord.

Into the tote goes a fishing tackle box for small parts (I’ll elaborate on that later), foot switches and stomp boxes, 8-ft plastic tube for the Talkbox, microphones, several 20-ft cords, a power strip, a 3-ring binder, a very thirsty towel, a small stand for the mandolin, and the small red lunchbox contains my wireless components. I tried to use mainly red velcro to bind up the wires (yellow was not available). Again, red is easy to see in the dark and Velcro can be used over and over. Zip ties needed replacing after every gig. Plus, the Velcro can be used to organize cabling before a gig.

Now this helps a lot for most of the stuff to carry around. But there are a lot of small parts as well. I wondered about this before stumbling on the solution while looking for scout supplies for my son. A fishing tackle box works great for the small stuff: 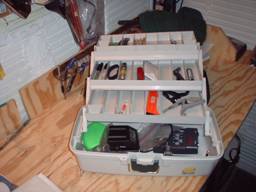 It’s amazing how much I have been able to put in here. Tuner, extra strings, picks, capos, slides, patch cords, a small flashlight, mike adapters, pre-amp, a small tool kit, wire cutters, Blitz Cloths, plus some off-the-wall stuff I learned from watching other musicians. I have a few wooden clothespins for securing lyrics to the stand on a windy day, a few Sharpies, business cards, a box cutter, an old toothbrush for cleaning, emery board, and even a Swiss Army Knife! Close it up and it fits snugly into my tote.

The 3-ring binder has become a nice little addition: 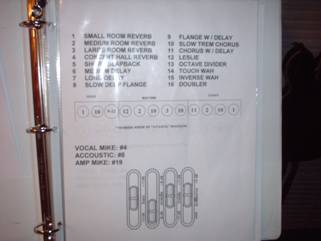 It’s a plain white affair with pockets inside the covers. I got several of those transparent inserts since they last longer than punching a hole in the paper. The first page is my main cheat sheet. The numbered list at the top documents the effects positions on my amp. The printing on the amp’s control panel is small and my middle-aged eyesight sucks! Right below that, I have my preferred dial position of all the controls. The knobs all get moved around during transit, and who can remember where they were when they left the house? The numbers are the “o’clock” position of the control knobs since there are no calibration numbers on my amp. Below that, I have the PA channels my mikes go into. And finally, the slider settings on my acoustic pre-amp.

The rest of the inserts are used for song cheat sheets. Darkness again can be your enemy at gigs. So I found a nice solution at the lighting department of the same home improvement store: 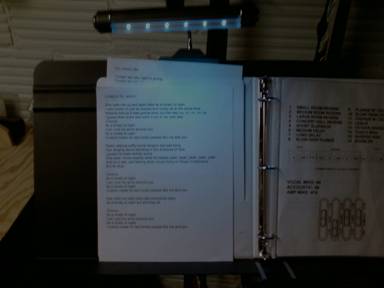 Finally, having the stands that work for you is a biggie: 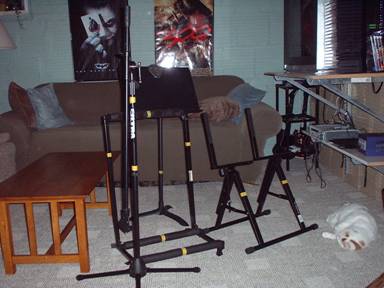 I spent the extra cash and got the orchestra music stand. It won’t tip over as easy as the collapsible ones and pivots to just about any angle you’d want. Same with the boom-style mike stand with the tripod base. The three-bay guitar stand is a little small for what I need, but it does the job. Plus it’s stable and has a small footprint. I saved my small gig stand for the mandolin. The amp stand is my latest acquisition. I never though about having one until someone let me use theirs recently. It’s great because it raises your small but powerful amp off the floor for better projection. It also tilts it back slightly which makes it a lot easier to hear what you are playing!

Watching over all this is Sydney, my road manager. For some reason, whenever I practice he comes in and gives me his opinion of my musicianship. Right after I took this picture, his brother (and my A&R man) Simon jumped over and bit him in the neck. Hilarity ensued.

Time to pack up and get going: 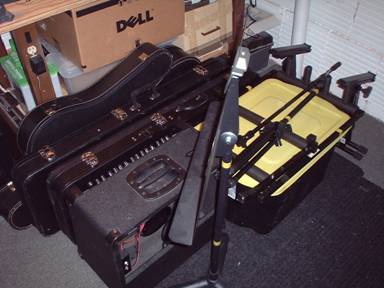 This will all fit snugly in the bed of my Ranger pickup. I have a retracting cover which locks shut in case the weather is bad. During the winter months, I keep my instruments in the passenger compartment with me. My thinking is if I keep them as warm as I am, then I won’t lose so much time warming them up before a gig.

In the end, I guess being a working musician is like working in a M.A.S.H. unit. You have to be mobile and still be functional. And since most of us have to move our own stuff around, we may as well keep things easy and organized so we can concentrate on playing