I was originally drawn to chord melody arrangements in general because I can’t sing (and don’t care to learn either!). I grew tired of simply strumming chord progressions, so this ‘multi-voice’ style, where the guitar plays the melody, harmony, and bass line pretty much all at once, fascinated me and seemed like a good way for me to progress as a guitarist. Because I had a hard time finding many solo guitar arrangements for the songs I would actually want to play, I decided to learn how to create my own. For my first attempt, I chose an easy song, with a well known melody – but one that I didn’t see many others arranging. And so I began this journey…

My basic approach to creating this arrangement was to develop the following sequence of layers: Melody, Bass Line, Harmonization, and then fine tune it to my liking.

I began by searching the internet for sheet music with tabs. I also found it useful to search Google “Images” to find sheet music. I transposed the melody to a new key so that I would be able to play in the open position on the first and second strings mostly, while making sure that the chords would be open chords, and easy to fret.

I then added the bass notes on the first and third beat of each measure. I chose these beats because they are the common accented beats in 4/4 time. Since the arrangement still sounded a little dull, I added a harmonizing note for most of the notes played. I simply chose the note on the string above the melody note. I also noticed that there were several pauses that could use some kind of fill, so I played arpeggios, using notes on the strings that were not being played. As I played the piece for a few days, I found that I usually never played the bass note on the third beat and, to my ears, this sounds just fine, if not better. However, I left the extra bass notes in the notation just in case you want to play them. 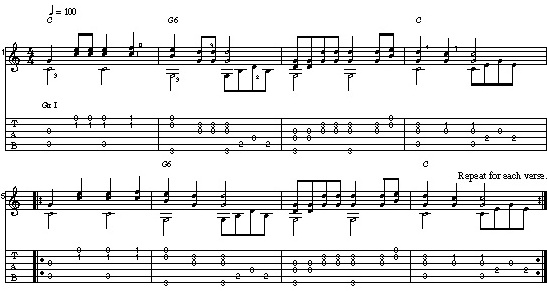 I believe that my first attempt created an easily playable, and enjoyable sounding finger style lullaby arrangement. I hope you have enjoyed it, and that you will play it. Remember that it is a lullaby, and should be played softly at a moderate tempo.

There are two articles here on Guitar Noise, that really that helped me get to this point: “Arranging Things – An Introduction to Song Arrangement – Part 1“ by David Hodge, and “Birth Of A Chord Melody“ by Graham Merry. If you’ve not read them, you should take a minute and do so. They might inspire you to come up with a chord melody arrangement of your own!

Some Final Thoughts on Using PowerTab

I used PowerTab – a free software package – to arrange, review, and create the sheet music/TAB for this piece. One feature that I had not learned how to use prior to this piece is the “high” and “low” melody feature. This gives you the ability to have quarter notes in the melody, and half notes for the baseline, as in the examples that accompany this article. This option is found under the menu option “Music Notes/Low Melody” (high melody is the default, the keyboard shortcut for toggling between the two is ‘ u ‘). You can search the help files or Google for more details.

My second suggestion is to be sure to play your file as you work on it. Play it often, and trust your ears. You will be able to hear a missed note, or something not timed right. It is better to catch it early, than to build on a mistake and have to correct more when you find the mistake.