If You Could Read My Mind – Gordon Lightfoot

Two years ago, when I started learning to play the guitar, one of my goals was to learn my favorite song, If You Could Read My Mind, by Gordon Lightfoot. I found an “Easy Guitar” book at the library that included this song, done in a standard “easy” arrangement showing the melody in tab format along with the guitar chord for each bar. After a few days, I was able to play the melody. It was a thrill to recognize the song when I played it but I was still a bit disappointed. Most of the action took place on the top three strings and sounded a bit like plink, plink, plink. I wanted something “richer” and more interesting to listen to.

Chord melody to the rescue! Guitar Noise has two most excellent articles about chord melody: Arranging Things by David Hodge and The Birth of a Chord Melody by Graham Merry.

You can use a pencil and paper to work on songs but using a software package like Guitar Pro is a lot easier. Guitar Pro lets you enter songs and play them back. It also does hundreds of other things – it would probably take years to explore all the functions – but fortunately it’s also easy to get started.

A software package like this can be an invaluable tool for learning the guitar. For example, I had a hard time figuring out how to play Going to Kansas City just from reading the lesson on this site. So I entered the song into Guitar Pro and, when I played it back, it became clear how the tricky looking triplets should sound.

I entered the “Easy Guitar” version of the song into Guitar Pro and went to work. Lots of decisions had to be made, such as in which key should the song be played. Both Guitar Noise articles mention that the melody should be on the high strings in order to make the melody notes stand out above the accompanying chord and bass notes.

Another decision – what style should be used? The article, Arranging Things, lists three styles of arranging a song:

An important decision came next – what notes to use. I tried several times to come up with an arrangement something that sounded good but found that I eventually lost interest because there were just too many decisions to make.

“If You Could Read My Mind” was the first song by Gordon Lightfoot to become popular outside of his homeland. The song soared to number one in his native Canada and hit the number five spot in the U.S. Lightfoot said his divorce inspired the song’s lyrics.

I revisited the project some time later and decided to “keep it simple”. The “Easy Guitar” arrangement was in the key of G so that’s how I left it. I wanted something relatively simple to play so I decided to use double stops, adding just one note of harmony to each melody note. The most important decision was what this note should be. I had been approaching the song as a mathematical exercise – like doing the entire song in intervals of fourths or sixths or always using the first or third of the chord as the base note. Life became easier when I decided to just choose the note that sounded best. If a particular bar was using a G chord, I added the note from the G chord that sounded best. Sometimes I didn’t like any of the chord notes so I then picked the note from the G major scale that sounded best. This certainly forced me into listening to what I was playing.

This is what I’ve done to the first part of the song. Here are the first four bars. I had a hard time picking the best notes from the Dm6 chord but after much discussion with myself, I finally decided on this: 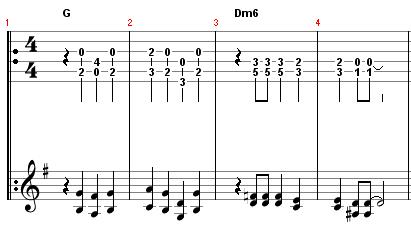 Bars 5 to 8 are a repeat of the first four bars with a small change in bar 7: 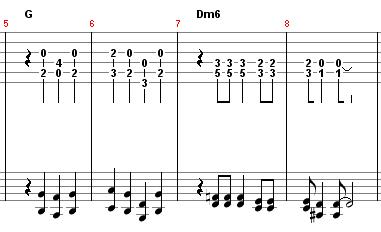 My favorite part of the song starts in bar 9. The song slowly ascends until the start of bar 12. It sounds so powerful:

Bar 13 starts with a three-note chord and ends the ascending phrase that started in bar 9. I picked the three best notes to play and discovered that the three notes form a G chord. I tried a D chord here but it didn’t sound right so I stayed with the G chord. Bar 15 starts another ascending phrase. The first note in Bar 15 uses an F for the bass note. An F doesn’t belong in a G chord but it sounds a lot better that an F# here. 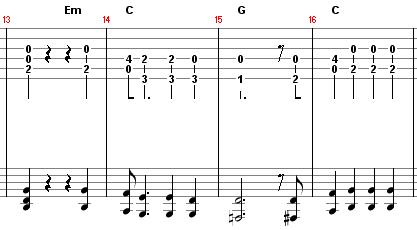 Bars 17 -21 finish off the first part of the song: Bar 20 starts with a three-note chord to end the phrase that started in bar 15. I ended this section with two bars of single notes. The single notes sound sad here and fit the mood of the song.

I hope that you enjoy my arrangement of this song and I would be happy to hear any suggestions on how to make it even better.