David Hodge Guitar Lessons Buying a Guitar and Other Equipment, How to Play Ukulele

The ukulele is currently riding a wave of popular appeal. Or one might say its latest wave, since the musical instrument has had numerous periods of popularity in its short history. Owing to some incredibly talented players, such as Jake Shimabukuro, as well as to popular rock stars like Eddie Vedder, and to the incredibly huge numbers of YouTube videos featuring the little instrument, the uke is getting major attention from people all over the world.

As a musical instrument, the ukulele has a lot to offer and a lot of advantages. It’s easily portable. If fact, if you’re looking for a travel guitar, something to take along with you on airplane trips, you might want to seriously think about getting a ukulele instead. You can readily store it in either the overhead compartment on under your seat. It’s definitely a lot easier to cart around than a guitar and also offers you a chance to do most of the same practicing routines that you’d work on with your six-string.

That’s not to say you should think of the ukulele and guitar as interchangeable instruments. Far from it! The uke has a unique voice and is definitely worthy of your time and study and practice all on its own.

However, just as with other instruments, if you’re serious about picking up the ukulele as a musical instrument, you have to take care to get yourself an instrument that can be played like a musical instrument. Over its history, the ukulele has had to overcome many serious musicians regarding it as little more than a toy or a novelty. Just like the guitar, there are more than a number of uke manufacturers who put out product that is, shall we say, more appropriate for a child’s playroom than for the stage.

Using your guitar instincts can be very helpful when buying your first ukulele. You certainly may not want to purchase a top of the line model right off, especially before you’ve determined whether or not you’re likely to seriously play the instrument. But you certainly do want to get an instrument that provides you with ease of playing and encourages you to play and practice as often as possible.

In case you’re totally new to ukuleles, the first thing that you want to think about is which size ukulele you want to purchase. Ukes come in four standard sizes – soprano, concert, tenor and baritone – shown from left to right here: 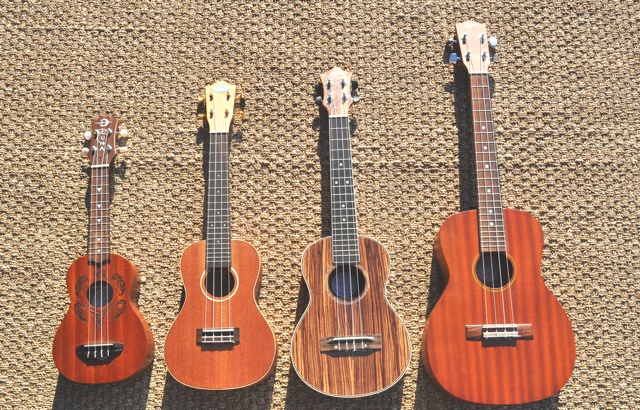 You might find comparing the spacing of the frets of each sized ukulele helpful to your choosing as well. Like the guitar and other fretted instruments, the spacing between the frets of all ukuleles gets smaller as you go up the neck. Since most beginners do their playing within the first five frets of the instrument (the five frets closest to the headstock), it’s good to check out those measurements. In the instruments in this photo, the spacing at the first five frets of the soprano is approximately Â¾ inch, the concert is about 7/8 inch and the tenor is just about a full inch. The baritone comes in close to 1 1/8 inches.

Just as with finding a guitar, your first concern should be how comfortable the ukulele feels. Can you hold it easily? Do you find it easy to strum and to fingerpick the strings? Can you manage getting your fingers onto the frets to create notes along the fretboard? Be on the lookout for sharp edges of the frets along either side of the neck.

Likewise, check out the physical construction of the instrument. Are there any cracks in the wood or in the finish? Are the seams glued well? Are the nut and saddle in good condition?

Far and away, the biggest potential problem area with most ukuleles is the tuners. To put it bluntly, cheap ukuleles usually come with cheap tuners, ones that hardly keep the strings in tune for an entire song! Be sure to make sure the tuners of the ukulele you’re thinking about getting hold the strings of the instrument in tune fairly consistently. The last thing you need is to get what you think is a great instrument only to find that you can’t play it for any appreciable length of time because it’s continually going out of tune.

A good rule of thumb is that if you’re in the market for a ukulele and that you intend to play music on it, then you should try to buy one in a music store rather than in a gift shop, souvenir stand or some kind of megastore where they sell everything from diapers to high definition television sets. Likewise, if you’re buying one online, take the time to research the manufacturer and find reviews. And be absolutely certainly that you know everything there is to know about the seller’s return policies!

Even though the ukulele is smaller than the guitar and has fewer strings, you want to spend as much time and energy choosing the best one for you as you would with a guitar. It’s the quality of the instrument, rather than the size, that truly matters.