Ho Chi Minh City used to be called Saigon. Today, it is the largest city in Viet Nam. On April 10, 2011 Bob Dylan and his band brought their latest tour to this city of nine million people. The show took place outdoors on the campus of RMIT University, just a little outside the hustle and bustle of the crowded city center.

Of the 8,000 tickets available only about half were sold. The show was all general admission on the grass of the university sports field. The regular ticket price was about $50, making it quite expensive for the average Vietnamese consumer. Recently the Backstreet Boys played to over 30,000 people at the sports stadium in Ho Chi Minh City, which should give you an idea of who the average consumer is! More than half of the people in Vietnam were born after the war ended thirty years ago and many of them haven’t even heard of Bob Dylan. His songs of peace and protest certainly resonate more with the foreigners, who easily made up half of the crowd.

This show was only Dylan’s fourth of the year. He played in Taiwan and then two nights in China before arriving in Viet Nam. Over the past few days some news reports have made a big deal out Dylan allowing the governments of China and Vietnam to vet his setlist. Their point seems to be that Dylan was once perceived as a protest singer, whether he agreed with that role or not, and he should seize the opportunity to protest on their behalf. I don’t really understand the reasoning behind it. What protest have those journalists who are calling for bravery made themselves? Bob Dylan is a performer and on this Asian leg of his tour he has shown he simply comes to play.

In fact, it’s typical of a Dylan show that he doesn’t generally interact or even acknowledge the crowd until the encore, when he briefly introduces the band. In some ways there’s not much point to Dylan trying to communicate with the crowd in any way other than through music. A lot of the crowd didn’t seem to be paying that much attention to the show itself. True, it was a warm night and everyone seemed to be enjoying the music and the freedom of a general admission concert. I saw a lot of people twittering, making status updates, snapping photos (of themselves) and chimping throughout the show.

They should have paid more attention because it was a rare, once in a lifetime chance, for the both the Vietnamese and the expats living there to see Bob Dylan. He and his band played an excellent show, rolling through the excellent selections of their eighteen-song set and offering new arrangements on everything, not just the old songs but the new ones as well. The show opened with “Gonna Change My Way of Thinking” with Bob playing keyboards. As the song ended he quickly grabbed a guitar and launched into a very different sounding version of “It Ain’t Me’ Babe.” The new arrangement had Bob playing a simple riff on his electric guitar and the chorus was stripped down so much that you’d think you weren’t supposed to sing along on the “No, No, No, it ain’t me” babes.” Each new arrangement brought an element of surprise to these songs that people have probably heard many, many times. For what Dylan lacks in stage presence, he makes up for in his ability to craft fresh sounding arrangements with his band that never wanders far from blues rock.

While Dylan played keyboard for the majority of the evening, he did pick up a guitar for four songs. The aforementioned “It Ain’t Me Babe” plus “Simple Twist of Fate,” “Tweedle Dee and Tweedle Dum” and the newer song “Beyond Here Lies Nothin'” Bob didn’t touch an acoustic guitar all night but this was a rock show, not a folk festival. His touring band consists of Charlie Sexton, Stu Kimball and Donnie Herron on the various guitars: electric, acoustic, dobro and pedal steel. George Receli turned in a smashing and flawless performance on drums while Tony Garnier rounded out the rhythm section alternating between electric and stand up bass. And regardless of what you may have heard over the years, Bob’s voice is fine. You can always figure out what song he is playing and understand every word. Perhaps the outdoor setting helped because the sound was as good as you could have hoped for. Vietnam should be lucky to get more artists and shows like this in such a laid back setting. Security was almost non-existent with people bringing in their own bottles of beer and wine (not to mention marijuana) and yet there were no problems at all. Everyone fed off the good vibes this road tour was bringing to town.

At some point Bob Dylan’s tireless touring will end. While Dylan and his band are still making the rounds you should do yourselves a favor and check him out near you. He’ll be playing in several corners of the world this year so check to see if he’s playing near you. 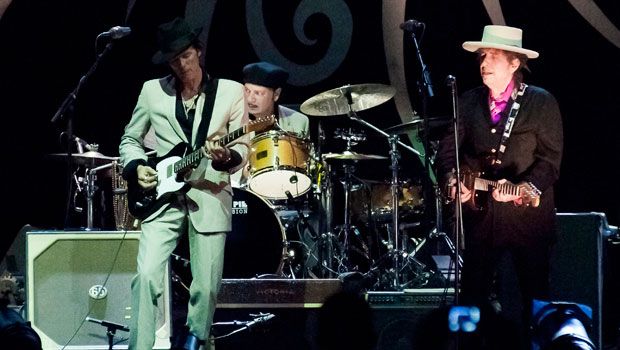 Setlist: Gonna Change My Way of Thinking, It’ Ain’t Me Babe, Beyond Here Lies Nothin’, Tangled Up In Blue, Honest With Me, Simple Twist of Fate, Tweedle Dee Tweedle Dum, Love Sick, The Levee’s Gonna Break, A Hard Rain’s A-Gonna Fall, Highway 61 Revisited, Spirit On The Water, My Wife’s Home Town, Jolene, Ballad Of A Thin Man, Like A Rolling Stone, All Along The Watchtower, Forever Young