His voice won a talent show when he was five years old. Before graduating high school, he and a friend were a top local act, singing harmony duets to bluegrass influenced accompaniment. He hadn’t even turned twenty before he opened for none other than Elvis. He played before a national audience on the Ed Sullivan shortly after turning twenty-one. By the time he was twenty-two he would not only be a huge star but also one of the biggest musical influences the world would know.

That may seem a bit of hyperbole, but consider this quote from Bob Dylan (who certainly can be defined as one of the biggest musical influences), taken from his acceptance speech in 1998 for winning the Album of the Year Grammy for Time Out of Mind:

“And I just want to say that when I was sixteen or seventeen years old, I went to see Buddy Holly play at Duluth National Guard Armory and I was three feet away from him…and he LOOKED at me. And I just have some sort of feeling that he was “” I don’t know how or why “” but I know he was with us all the time we were making this record in some kind of way.”

Or read the words of Bruce Springsteen, taken from his interview with Dave Marsh for Rolling Stone back in 1978:

“I play Buddy Holly every night before I go on; that keeps me honest.”

Or simply nod your head when Keith Richards says that Holly was “an influence on everyone.”

Born in 1936, Charles Hardin Holley spent most of his life in his hometown of Lubbock, Texas. His older brothers taught him how to play guitar as well as a number of other instruments like the lap steel, piano, fiddle and banjo. He played all sorts of music, bluegrass and blues and eventually incorporating rockabilly and rock into his style. His singing and playing made him contacts and when Elvis Presley played Lubbock in 1955, Holly got to open for him. He also opened for Bill Haley and the Comet when they played a local show there.

The show with Haley led to a contract with Decca Records as well as to having his name misspelled as “Holly,” which he continued to use throughout his career. For the Decca sessions he put together a band with people he knew from jamming in Lubbock – Jerry Allison on drums, Joe Mauldin on bass, and Nikki Sullivan on guitar. The Crickets, with Holly on lead vocals and lead guitar, was one of the first instances of the four-piece rock band that was a template for many, many bands to follow.

Their debut album, The “Chirping” Crickets, was released in November, 1957 and their first single “That’ll Be the Day” hit Number One on Billboard’s 200 as well as on the UK charts. Even more significantly, it made it to Number 2 on the R&B charts. The group toured extensively through 1957 and even took their music to Australia and England in early 1958.

In June of that year, Buddy met Maria Elena Santiago, a receptionist at a New York Music Publishing House. He invited her to dinner and while they were on their first date, he proposed. They married in Lubbock in August and Maria toured with the group until late that year when Holly wanted to spend more time in New York pursuing his ever expanding musical interests while the Crickets opted for going home to Texas. When Holly was offered a spot on a midwinter tour of the Midwest, he put together a new group of Crickets (Waylon Jennings, Tommy Allsup and Carl Bunch) and hit the road, leaving his pregnant wife at home. 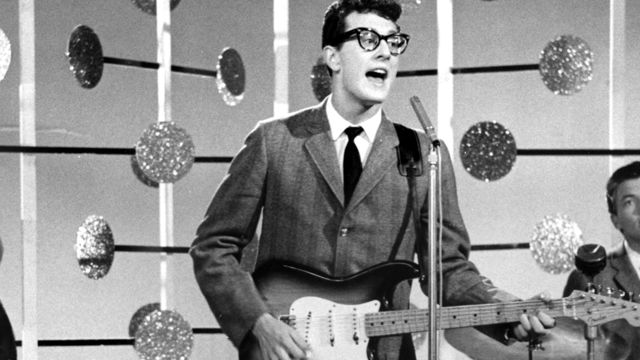