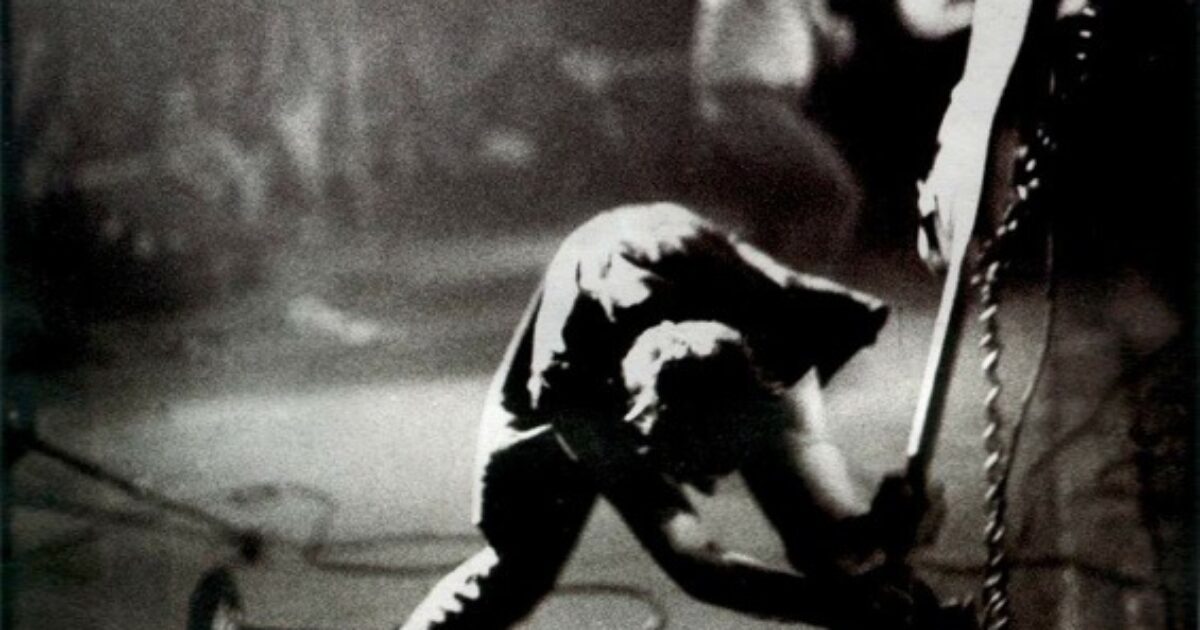 This week my younger son came over with a rough cut of one of his bands (the Hollywood Nightmares) first CD, which should be released in May or June. They play “punk pop” music – which I’d characterize as tight vocal harmonies over driving guitar based punk progressions (think of the Beach Boys singing Ramones tunes and you’ll be pretty close to their sound).

That got me to thinking punk music might be a fun thing to explore in a quick lesson here – so I decided to write a quick punk primer. Bear with me – or eagerly anticipate – my typical digressions into music theory stuff along the way.

Punk music is generally loud, fast, and distorted. And that means you’ll be playing power chords almost all of the time.

Digression one: A power chord isn’t really a chord at all in music theory terms – it’s an interval. “Chords” require three or more different pitches; “intervals” have only two. So you’ll be playing only two different notes at the same time.

Power chords are usually “perfect fifth” intervals. Intervals have two different parts to their names – the first part tells you the quality of the sound, and the second part tells you how far apart the letter names are. So a “major third” interval will have a different quality than a “minor third” interval, but both are thirds… which means they’ll both be exactly three letter names apart in the musical alphabet. We can have A-C as a third, which means the space between them is A (1), B (2), and C (3).

Sharps and flats don’t matter for how far apart interval notes are. Ab to C# is a third, as is A# to Cb, Ab to C, or any other A-C combination. If you’re looking at Ab and C#, you could also call those notes G# and Db. But then it wouldn’t be a third anymore – it would be a fifth, because you’d be looking at a spacing of G (1), A (2), B (3), C (4), and D (5). So this is one of those areas where music theory diverges from musical sound… what we call the notes determines the interval size, not what they end up sounding like.

Now back to our regularly scheduled program. On the guitar, we can play three open power chords: 02xxxx is an E power chord, written as E5; x02xxx is an A power chord, or A5; and xx02xx is a D power chord, or D5. If you look at the basic shapes of those, you’ll see that there’s the note that names the chord, called the root (the open sixth string for E5), and another note on the next string two frets higher.

If we moved both notes of that E5 power chord up a fret, you’d have 13xxxx. Since the root note is now the F on the first fret, that’s an F5, or an F power chord. Up another couple of frets you’d get 35xxxx – with a root note of G, making G5, or a G power chord.

It’s worth taking the time to learn the root notes on the sixth and fifth strings, and maybe even the fourth string.

You might have noticed that you can get the same letter name on any combination of strings. Some, like xx02xx, x57xxx, and 10-12-xxxx, will sound almost exactly the same (a digression for why that’s so is coming). Others, like 35xxxx and xx57xx, will sound in different octaves. All have their uses.

That brings up another point – since the F5 power chord consists of just two notes (F and C), we can play them in two different ways: with F as the bass note (13xxxx) or with C as the bass note (x33xxx). Both are power chords… but the second example is turned upside down. In music theory terms, that’s called an “inversion” – the same notes played in a different order.

Digression two: Interval inversions always add up to nine. Inverting a fifth will always get you a fourth; inverting a third will always get you a sixth. With many intervals, inverting the tones means a change in quality – a major interval becomes minor, a minor interval becomes major. With power chords, it doesn’t matter… a perfect interval inverted gives you a perfect interval. However, our fifth has become a fourth; some music will identify a C-F interval as “C4”, indicating a perfect fourth power chord. Even if it doesn’t, you CAN play C-F (x33xxx) in place of F-C (13xxxx) if you’d like. It doesn’t change your chord progression.

Now that we’ve covered the basics of power chords, let’s move on to the bass line.

Power chords aren’t major or minor. In fact, what makes it a power chord is the fact that it’s missing the tone that would create a major or minor sound for a chord – so they’re both (or neither, however you want to see it).

When you’re working out a punk tune, you want to pay close attention to the bass line. That’s going to dictate the chords you use: C-G-Ab-F will describe Green Day’s “Holiday”; A-D-E will describe the Ramone’s “Blitzkrieg Bop”. Follow the bass line with your power chords, and you’ve got the tune under your fingers.

There are two basic sounds you’ll use to create punk tunes. One is just the basic, raw power chord. The other is called “palm muting”. In palm muting you’ll rest your picking hand close to the bridge, but on the vibrating strings. This will dampen the tone, giving you more of a thumping sound than a ringing sound. If you get to far from the bridge, you’ll deaden the strings too much…. too close to the bridge and you won’t get much of the effect. Play around with the position of your hand doing simple exercises like this:

Time now for digression three, explaining the ‘why’ of power chords and a couple other things of interest – but stay tuned; I’ll come back for one last point on dropped tunings.

All musical sounds have four basic components: pitch (how high or low), intensity or dynamics (how loud or soft), duration (how long it lasts), and “timbre” which is everything else that determines what it sounds like to our ears. Bagpipes or church organ can play the same pitch at the same volume level for the same amount of time, but we instantly know which one is which. That’s timbre.

Every instrument produces these same pitches, called the natural harmonic series. But the relationship of the pitches varies… in a flute, the overtones (the sounds above the fundamental) are pretty weak in relation to the fundamental; in a French horn, they’re pretty strong. Each instrument distributes them in a different way, which lets our ears tell them apart – a bagpipe doesn’t sound like a banjo because they have different overtone distributions.

When we reach tube saturation on the fundamental, our guitar still sounds like it did below saturation. But as soon as we get above that level, it sounds different – because the overtones, being weaker, can still get louder – but the fundamental, since it’s at saturation, can’t. At this point the sound of the guitar starts to change, creating that crunchy sound we’ve all grown to love from rock guitars.

As the volume continues to increase above saturation, the first overtone (the next E) also reaches saturation, followed by the B, and the next E. Now they’re all just as loud as the amp can get them… but the “roughly” G# can still continue to increase.

It doesn’t matter as much that the D# and G# pitches aren’t dead on, because there aren’t any overtones to directly compete with them. That’s why an E5 power chord sounds “solid” with distortion, and an E major chord doesn’t.

All done with that digression.

A lot of punk bands (and a lot of metal bands, which typically also use distortion) play in drop tunings. “Drop D” tuning means you’re lowering the 6th string until it’s a D pitch. All the other drop tunings are related – “drop C” means you tune to drop D, then tune EVERY string an additional whole step lower, creating a tuning of C-G-C-F-A-D.

And one finger and sufficient attitude can make a hit tune!

Finally, digression four: why xx02xx and 10-12-xxxx are the same pitches, but they don’t sound exactly the same. Strings produce overtones based on their length, tension, and mass. In this case, we’ll assume that all of our strings are under the exact same tension. But the 10th fret of the low E string has a string vibrating for much less length than an open D string, even though they produce the same fundamental pitch. At the same time, the low E is much thicker, giving it more mass.

I’ll spare you the acoustic science equation, but the differences in mass and length mean they’ll produce different overtone distributions. This concept is called “string inharmonicity” – or why the same pitch created on two different length/mass strings sounds different. If you’re an acoustics geek like me, you can Google it for more detailed explanations.

But then again, if you’re an acoustics geek like me, you probably already know!

Tom (“Noteboat”) Serb is a longtime Guitar Noise contributor and founder of the Midwest Music Academy in Plainfield, Illinois. This advice first appeared in Volume 4 # 24 of Guitar Noise News. Sign-up for our newsletter to receive more free tips like this by email.