I’ve had a few students asking me about exotic scales recently, so I’ve distilled a little dialogue exploring the topic. Hope you find it useful!

Well, I’d like to use some exotic scales in my solos. I try, but they don’t sound right.

Well, there are a couple of different ways to use them… what do you mean by not sounding right?

They just don’t sound good. When I solo with major scales or pentatonic scales, it sounds ok, but the altered scales don’t.

I see… well, there are really three different ways to use altered scales. The easiest way is to use them as a contrasting element called a variation. Play me a phrase in C major.

Good. Now let’s pick a scale that’s got seven notes, just like the major scale does. How about the Zangula scale? That’s one of the scales from Arabic music:

The differences in the scale are the third, fifth, and seventh, which all get flatted. Now here’s how your phrase sounds when you repeat it flatting those notes:

I understand you so far… but I’m still not sure how to use it.

Most of the time when we build a solo using contrast, the main theme – your phrase in C – we can call the ‘A’ form. The variation would be ‘A1’… so when you structure a longer phrase, we usually make it A-A1, like this: 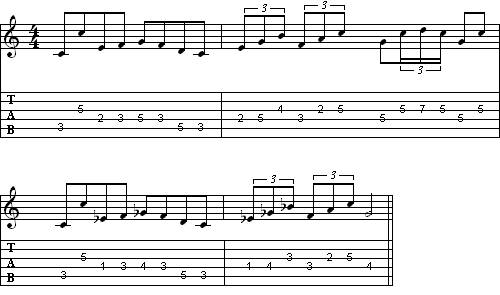 I just added a couple notes to your original phrase so it flowed into the variation.

I get it now! But it doesn’t sound Arabic to me…

That’s because we’ve used it as a contrast. It’s like speaking the original phrase a second time with an Arabic accent – that’s not really the same thing as speaking in Arabic.

Well, a style of music is about a lot more than just the melody. For example, when we studied the blues scale, you played a lot of triplets and broken triplets, because they’re so important to the blues feel. Every style of music has rhythmic signatures, and when we combine those with melody and harmony, it sounds like that style. Here’s a signature rhythm in Arabic music:

So if I play our A1 riff with that rhythm, it’ll sound more Arabian:

And if I harmonize the scale, the tonic chord is going to be C-Eb-Gb, or a G diminished chord… the IV chord will be F-A-C, or F major, and the V7 chord will be Gb-Bb-D-F. That’s a pretty awkward chord, since the F and Gb notes are so close together, but we can just take the top three notes as a Bb major chord. So if we throw some of those chords into the mix, we can get something like this:

So how can I tell what rhythmic signatures to use for a style of music?

By listening to music in that style. When you listen, try to figure out if there’s a rhythm that’s constantly repeated. Then listen to another couple of tunes in the style, and see if they use the same figure. Pay attention to how the melodies and harmonies are shaped, too… if you change just a couple notes in your original melody, you can make it even more Arabic sounding:

Very cool. But there’s a lot of different scales… show me another one?

Ok. We started with a seven-note scale, which makes it very easy to use alterations against your original phrase. If you use a scale that’s got a different number of notes, you’ll use extra notes as passing tones. If it’s got fewer than seven notes, you have to plan the alterations a little more carefully – you can repeat a note, or use the note above or below the corresponding scale tone. Let’s try the original phrase with the Rwanda scale, which has no fourth, and a flatted third and seventh:

It should! The Rwanda scale is the same as minor pentatonic with a second instead of a fourth.

You said there were three ways to use altered scales – we’ve talked about variations and using signature rhythms… what’s the third?

Well, that’s the one with the most freedom of all: if you learn the scales, and how to work with them, and you do it long enough… you’ll hear them when you want to, and you’ll be able to pick and choose elements from different scales as part of an overall melody. It’s got a lot in common with variation, but you don’t need to start with a simple theme.

Tom Serb is a Chicago area guitarist who has been making music professionally since 1978. Over the course of the past twenty-five years he has managed to amuse himself by teaching, writing, performing, producing and composing. He is the author of Music Theory for Guitarists (NoteBoat, Inc., 2003), and a frequent contributor to the Guitar Noise forums.