Open C Tuning on a guitar is tuned, from your lowest (thickest) string to the highest (thinnest) string, CGCGCE. You may notice this means there are a lot of repeating strings, which is where the strength of this tuning lies. If, for instance, you had a run or a lick that was on String 4 then that exact run would also work on Strings 2 and 6. This means that although Open C seems like a fairly scary sounding tuning (I mean aren’t open D & G enough!), it really is relatively easy to get to grips with and, more importantly, to have fun with straight away.

So let’s get started. You can, of course, use a tuner, but I’d like to walk you though how to do it manually. This may seem silly, but it does help to (a) work on your ear training and (b) make you familiar with the notes involved in this tuning.

To get our guitars into Open C tuning, first tune your 6th string (low E) down a whole step to D and then tune string 5 and 4 down using the fifth fret as your matching note as you would in standard tuning (giving you G and C on the 5th and 6th strings, respectively). We now have a C note to use as a reference for everything else. You can then drop the 6th string down again another whole step to C. The 3rd string, G, stays the same, as does the 1st (high E) string. And now comes the scary bit. Tune the 2nd string up a half step to C. As a general rule, guitarists avoid tuning up whenever possible, but this is the exception that proves the rule! It helps that it’s only a half step and that it’s the only string of the six that is raised.

And there you have it – Open C! Here are your basic scales to get your fingers round to start getting comfortable with the tuning:

C Minor Pentatonic
I have made the above scale shapes to have as many open strings as possible. I won’t write out lots of variations as one of the keys to getting comfortable in a new tuning, I think, to mess around with scales and chords and find some different things that you enjoy doing and that sound good to your ears. It’s also a lot of fun. You might want to check out the article, Here There Be Monsters, which nicely details how to go about putting together a “fretboard map” for any given tuning.

If we think about some chords now, a good way to use an open tuning is to let the top strings ring out and just move a shape around the bottom (this is called suspended harmony) for example:

If you wanted to use simply chords in first position then these are the chords in C:

We could of course go on for thousands of chords, but that would take up too much space (in this article at least!), so take the chord ideas I have given you here and experiment with adding 7ths and 9ths or whatever else it is your ear tells you to make! Different chords appeal to all of us and you’ll probably find a whole bunch you like.

I am guessing, though, that however interesting you have found this article so far, you wouldn’t mind learning a little more than playing some chords and a minor pentatonic scale (we hardly need more encouragement to use that scale!). So let’s dig a little deeper into the nature of Open C tuning and some of the many reasons people use it:

Many, many guitar players use Open C. For the purposes of this article, we are going to look at the ways that John Butler employs this tuning. And if you don’t know John Butler, then search for a video of him playing an instrumental called Ocean. It is a really beautiful piece of music and it’s in, you guessed it, Open C.

On Ocean, John uses a capo on the 4th fret, which means he’s actually in E even though he’s playing in Open C. This particular track is a very varied instrumental in its technique and we are going to be playing through a track (not a note for note transcription) that has similar techniques involved and will give us an idea of the kind of possibilities open to us. 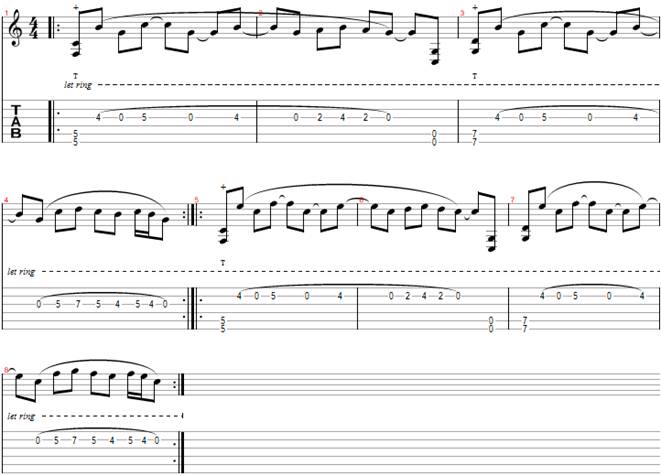 The notes that have a ‘T’ above them are tapped notes (this means you use your right hand to play these notes). There are lots of articles and sources about tapping around, so I wont go into the intricacies here. Because your right hand is being employed with tapping then we have to play all the other notes with hammer-ons and pull-offs. Again, there are lots of resources around if you need to brush up on this. This piece and style of playing does tire your left arm muscles very quickly, so take lots of regular breaks! But most of all, enjoy!