Graham Merry Guitar Lessons Buying a Guitar and Other Equipment

This is, I hope, going to be one of a series, in which the knowledge of GN users is consolidated into a (short) article. All the information has been gleaned from posts made on GN fora over a long period of time. The first of these will try to look at plectra or picks, whichever you prefer to call them – I’ve called them plectra.

Unfortunately, offering concrete advice on plectrum selection is very difficult, there is probably no piece of a guitarist’s equipment which is quite as subjective as his plectrum. Everyone has fairly concrete ideas about what sound his guitar should have, what strings he should use, etc., but nothing has quite the wide variety of options as the humble plectrum – ask 20 guitarists what they use and you are likely to get 20 different answers. The options of material, shape and thickness are almost endless. To keep this article within reason, I have decided to confine myself to normal plectra and ignore things like finger-picks, for the time being – maybe another article at a later date.

For beginners, it is important to stress that there are no hard and fast rules with regard to plectrum selection, it is purely a matter of taste what you use. Some prefer thin plectra, some thick, some medium, some swear by Tortex, some by real tortoiseshell. If it feels right and plays well for you, it is a good pick – for you.

There are, however, some tips which may help the new guitarist to decide which plectrum to choose. In fact, I take back what I just wrote, there is one hard rule in choosing a plectrum (see, even I can’t make my mind up) – buy as many different ones as you can afford and try them all out.You never know, in there may be your non plus ultra, your dream plectrum – no matter who it’s made by, what it’s made of or how thick it is, if you think it’s the bee’s knees, then it is. But, then again, who knows, there may be one out there that is better than your current favourite and you will never know until you find it.

I’ll list the various factors which contribute to choosing a plectrum and let you make the choice which you prefer to use:

The thickness of the pick has an effect both on the sound produced and on it’s playability.

A thin plectrum (anything less than about 0.4mm is regarded as “thin”) is mostly what beginners start out with. It will make strumming chords relatively easy, because of the flexibility of the material. On the other hand, many guitarists say that playing a lead riff with such a thin plectrum is difficult because it doesn’t give the control of a thicker plectrum (although there are long-standing professional guitarists who use nothing else but thin plectra – see what I mean about personal choice?). A thin plectrum will tend to give the sound a slightly sharp edge to it, no matter what material is used. Depending on the type of music you are playing, this may or may not be a good thing.

Medium plectra (from 0.4 up to about 1mm) are possibly the most widely used of all. They offer enough rigidity to maintain good control during lead sequences, but also enough flexibility to not make strumming chords difficult. The sharp edge to the sound, produced by a thin plectrum is reduced and a slight softness (or roundness) is heard. How much noticeable this softness is depends on the material used for the plectrum and tortoiseshell, for example, will be softer and rounder in tone than a carbon fibre mixture or metal, for instance.

Once you get above 1mm, all plectra seem to be rated as heavy and come as thick as 3mm or more (although the playing tip is very little thicker than a medium plectrum). They give excellent control over lead passages, but suffer in the rhythm category. The big fat 3mm picks seem to be loved primarily in the jazz world.

There seems to be no end to the different materials used in making plectra. There are all sorts of plastics and natural materials, from tortoiseshell to space age metals and ceramics. Each one has it’s own character, feel and sound. Whether it is right for you or not is, unfortunately, going to be the result of trial and error. In my collection I have fake tortoise shell, nylon, carbon/nylon mix, Tortex, plastic and metal. No two sound exactly the same.

One of the nice things of, particularly, man-made materials is that they slide easily over the strings and produce little resistance (which can produce an unpleasant sawing or scraping sound). The same property is also one of it’s greatest weaknesses – it moves as easily around in your fingers as it does over the strings and keeping control over the plectrum is often a major problem (particularly for beginners, who have yet to master the finesse of “as little pressure as possible, but as much pressure as necessary”). One of the easiest ways, that I have found, of stopping the plectrum revolving in your fingers is to drill a couple of small holes where your fingers grip, although you can buy plectra with holes already drilled through them. There are also commercial products like the romatically named “Gorilla Snot”, which also stop slipping.

The consensus of opinion seems to be that, begnners should start with something in medium thickness. The material is irrelevant, but it’s, perhaps, wise to start with plectra that are readily available and cheap – they are usually that way because they are popular. Dunlops seem to be available almost as widely as Coca-Cola and, judging by the posts on GN, the plectrum of choice for many guitarists.

As you get a little more experienced, why not try something with a different sound, like a coin. The American quarter makes a nice plectrum as does an old English Shilling with it’s milled edge. In fact, there is a whole market selling plectra made out of sometimes pretty odd materials. You can buy them made of semi precious stones, wood (with some very exotic looking grains), old cymbals, silver and glass, the list is almost endless. It’s just one of those things that makes buying plectra so much fun – you’ll never run out of something new to add to your collection.

This is another “no-holds-barred” area of plectrum design. Everyone wants to prove that “his” shape is better than everybody else’s. There is every conceivable combination of angles and curves, from a circle to a triangle and everything between and beyond. You only have to look at my small collection to begin to appreciate the diversity. Don’t start off right away with weird shapes, though, get used to the “plain vanilla” teardrop-shaped plectrum first. It’s that shape because experience has proven it to be the best shape for most guitarists (OK, I know, but finger pickers shouldn’t be reading this anyway!).

There is one particular size that can be called “standard” and makes up about 90% of all teardrop plectra. This is where the beginner should start – don’t start with the exotic until you have mastered the mundane.

Over and above the “standard” size, there are a number of oversized plectra and a good assortment of smaller ones, often referred to as “jazz picks”, which also seem to make up the majority of the 2mm+ thick plectra. I would not really recommend these for the beginner, certainly not until you have learned to grip the plectrum correctly. Don’t start out with anything too small, too big or too ungainly (there are some big triangular things that could almost substitute for a frisbee), you need to be able to hold it comfortably.

For the beginner, the middle-of-the-road, plain vanilla teardrop plectrum is the best choice to start with. Coincidentally, whilst I was writing this, there was a post on GN asking what plectra people used. As you can see from the replies, which I’ve shortened for brevity,… well, take a look for yourself….. 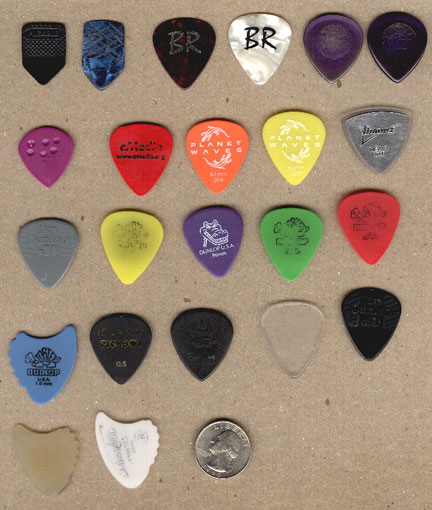 Ranges from the thinnest at nothing measurable in the top left hand corner to a 3mm fatty in the top right hand corner. With the exception of the 2nd right at the top (at 2mm), all the rest come in the 0.4mm to 1mm bracket.