The cigar box guitar, one of the most primitive and basic of homemade American musical instruments, is flourishing these days. The first cigar box guitars appeared in the mid-19th century in rural America made from castoff materials by both black and white musicians, usually too poor to buy a “real” guitar from the ubiquitous Sears catalog or elsewhere.

Shane Speal of York, Pennsylvania, a married father of two boys, is the self-appointed King of the Cigar Box Guitar. When asked why he refers to himself himself that way, Shane replied, “I always wanted to be legendary for something, but it’s a goof and not meant to be taken seriously.”

Regardless, Speal has undoubtedly popularized the cigar box guitar perhaps beyond his wildest dreams since he started playing them almost exclusively years ago. Shane gigs regularly, both solo, and with his Snake Oil Band and other combinations of musicians, playing cigar box guitars, many of which he has made. He manufactures and sells “CBGs” on his website, shanespeal.com, runs another website, CigarBoxNation.com, freely distributes extensive information on building the instruments, organizes cigar box guitar festivals, hosts cable television and radio broadcasts, and tirelessly promotes other cigar box guitar artists worldwide.

We asked Shane how he got into cigar box guitars.

“I was obsessed with blues music after playing heavy metal in high school. Like a lot of young white kids, I started with guys like Jimi Hendrix, then gravitated to Muddy Waters and Hound Dog Taylor, and then discovered the original Delta guys. I was listening to a lot of old blues records and beating the hell out of an old Stella acoustic, using a Craftsman metal socket for a slide, when I realized my favorite music was the earliest stuff where the performers sounded really primal and creaky. The cigar box guitar was an instrument that was less than perfect from the very beginning. I built my first one in 1993. As soon as I tuned it up, I knew this was the sound and vibe I was looking for.”

And, as might be expected, Shane has an extensive collection of cigar box guitars.

“I have over one hundred instruments, some of which are at home, but most of them are displayed at my family’s tavern in New Alexandria, PA. My latest is a two-string cigar box guitar I bought off eBay that’s over a hundred years old and very primitively made.”

Shane has a marketing background that he uses liberally to promote himself.

“Marketing is just as creative as songwriting or instrument building. I run a company called Shane Speal Music and Marketing. I work with other businesses as well. My biggest client is CBGitty.com, the world’s largest online catalog of cigar box guitars, parts and accessories. Ben “Gitty” has released several products of my own design. I’ve also done marketing and ad design for those wacky Multivox guitars.

“Every guitarist should have a cigar box guitar. The cigar box guitar by its nature is the instrument of the poor. Hard times make for unforgettable music. And I tell everyone; make a cigar box guitar yourself. Anybody with some knowledge of simple tools can make one, especially with all the plans and information on my website and the Internet.” 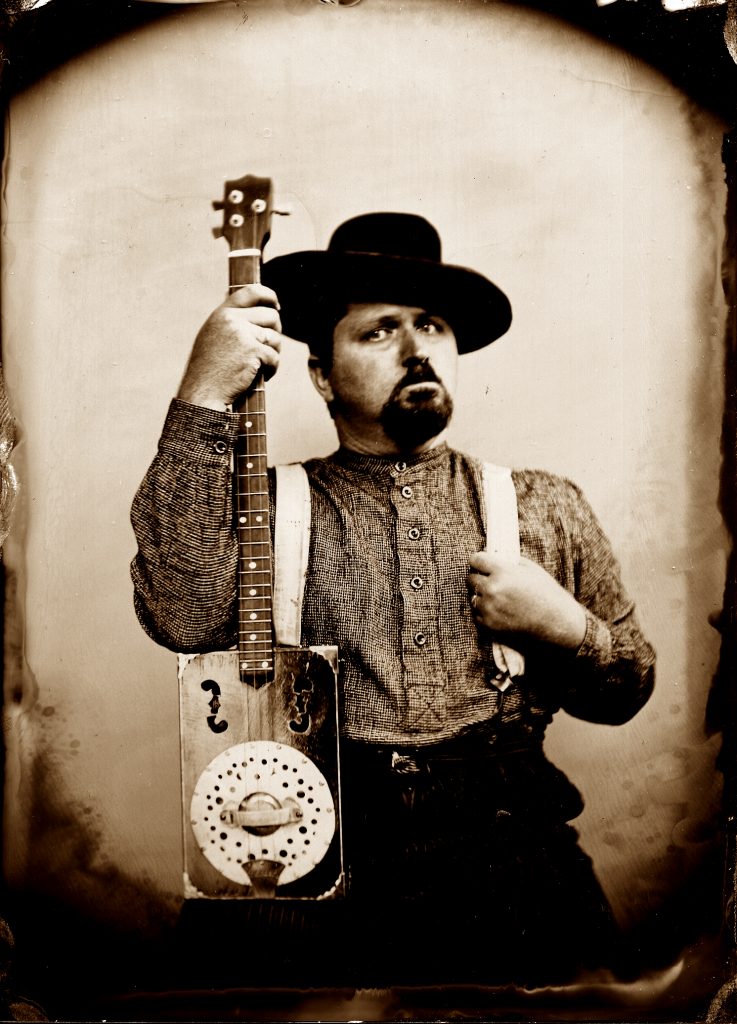 Bob Cianci is a freelance music journalist and author of the cult classic book, Great Rock Drummers of The Sixties, as well as a working guitarist and drummer. A lifetime musician, Bob also buys, sells and collects guitars. He has written for Premier Guitar, Vintage Guitar, Guitar Player, Collectible Guitar Then & Now, Guitar Coach, Blue Suede News, Modern Drummer, Vintage Drummer, Drumhead and many other publications, newspapers, blogs and websites. He lives in northwestern New Jersey.