How To Play Simple Chords On Keyboard And Guitar

The main focus of this lesson is to instruct on how to play the simplest of chords on a keyboard while showing how to obtain them with some small amount of understanding. Hopefully, this will help the guitarist understand how chords are played on the guitar easier than using the guitar alone. It will also provide the guitarist with a quick introduction to the keyboard. By using the information provided below, the guitarist can more easily figure out what notes are being played with particular chords.

Having some small amount of musical training while I was young, I can say where things usually begin when a new student is being taught piano. It starts at middle C.

So, where is middle C? The placement of middle C on a musical staff can be researched on the person’s own time. I am sure it is found in a number of other places on the Internet. This lesson will show how to finger all the major chords, minor chords, and dominant 7th chords, hopefully without overwhelming you with music theory. So, let us have a look at a diagram of the some keyboards.

Note that middle C is off centre and not the middle note in the keyboard. This is because this and many other keyboards as well as full-size pianos are not symmetrical about middle C. The reasoning behind that is for some other topic of research that goes into the development of music as a whole. What is important is that you can learn how to locate middle C with a little practice.

Other common sizes for keyboards are 73 keys, 76 keys, and 88 keys. These can be seen below in Figure 3, Figure 4 and Figure 5, respectively.

While middle C is not usually (see Figure 3) in the middle of the keyboard, it is almost there. It makes a practical place to start in terms of range of musical sounds. It also makes a very good place to start when studying music theory.

The notes of the C major scale are:

Each note in the C major scale can be numbered using regular numerals and Roman numerals:

Note that I listed the next C in the scale while showing an octave instead of stopping at B as shown in Figure 2. This has to do with showing the formula for a major scale. This will make learning how to apply the formula to other notes easier later.

When playing chords in the C major family, very little thinking has to be done because only the white keys are played. When each finger of the right hand assigned to one key, everything falls into place. If you place the thumb of the right hand on middle C, the rest of the fingers will each fall on one key naturally. Refer to Figure 6 below as an example. 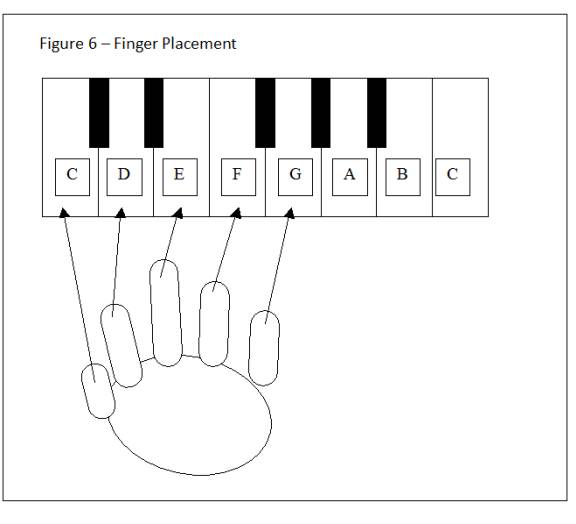 So, start by playing the C major chord, commonly referred to as C. Place the thumb of the right hand on middle C (or any C), skip using the index finger, place the middle finger on E, skip the ring finger, and place the little finger on G. That is the simplest C chord you can make. To play the D minor (commonly shown as Dm) chord, just move the hand to the right one white key so the thumb plays D, the middle finger plays F, and the little finger plays A. To play the E minor chord (commonly shown as Em), move the hand to the right one white key. This is the same for all successive chords for the C major scale.

When it comes to playing chords an octave higher, it is easy using a piano or other keyboard instrument. When playing guitar it is different because you can form different version of the same chord in different places on the fingerboard. If playing an electric guitar it is easier to play chords one octave higher because the fingers can be placed that high on the fretboard (fingerboard) more easily due to the way the guitar is built.

For the C major scale, the chords are shown for the respective note below:

What makes a minor chord minor? The answer is that the 2nd note in the chord (the major 3rd) is made a minor 3rd. This means that the 2nd note is reduced by a half-step. Example: D notes: D, F#, A – note that F# is not a note in the C major scale. Now it can be seen that the D chord is not a chord in the C major chord family. Dm note: D, F, A – note that the major 3rd (F#) is reduced to F. 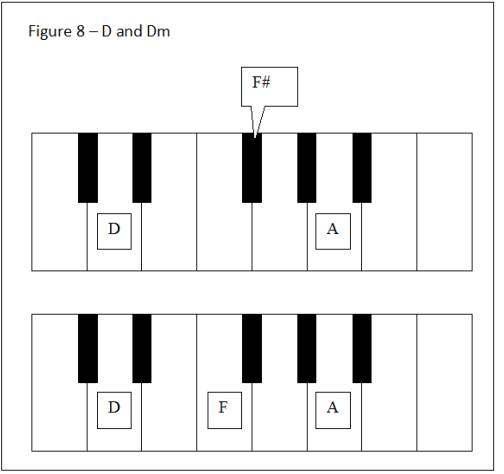 Just using the knowledge associated with the C major scale we know where the major chords are for the notes: C, F and G. We the know the minor chords are for the notes D, E, A, and the diminished chord is associated with the note B. Remember, the method for playing all of the chords in the C major scale is provided in the paragraph below Figure 6. All chords in the C major chord family can be played by using the thumb, the middle finger and the little finger. Actually, for later use and knowledge, the same holds true for playing the chords to the left of the right hand but starting with the little finger and moving to the right. The fingers used on the left hand are the little finger, the middle finger and the thumb. 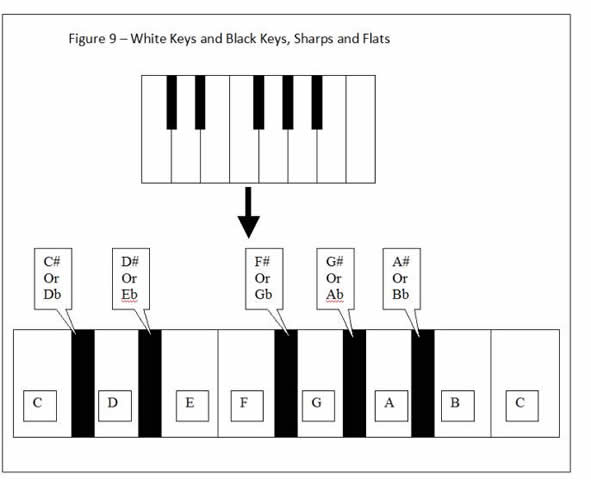 Figure 7 shows an octave of keys from the notes C to C. The top of the figure shows how an octave normally looks while the bottom of the figure shows the octave as if the black keys in the octave were extended to the full length of the white keys. The extension of the black keys is done to show that there is movement of one half-step between all keys, black or white even though some white keys have no black keys between them. Note that there is no sharp (#) or flat (b) between the notes E and F and B and C.

Because we know what makes a minor chord minor, we can extend that knowledge to figure out what the major chords are for the notes D, E and A by using the chords Dm, Em and Am. Place the right-hand fingers on a keyboard for one of the minor chords mentioned. Just move the middle finger (the one on the 2nd note of the chord) up a half-step. To moved up a half-step is to move up by one key – black or white. Refer to Figure 7 above for reference. 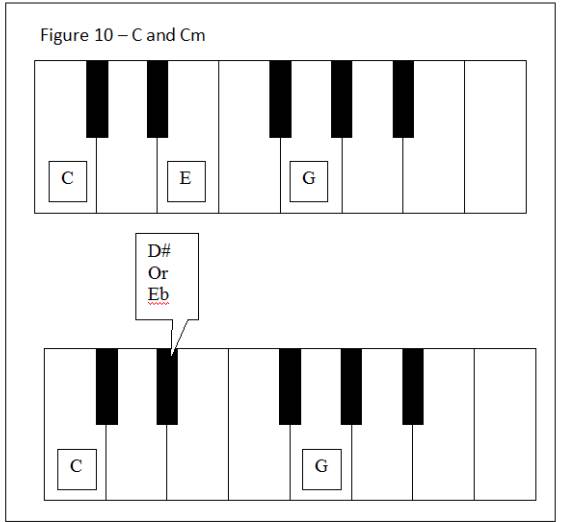 Now it is possible to figure out all of the major and minor chords for all the notes on the keyboard. It is good to note that this method is easiest to use for the white keys. The only chord that has not be explicitly discussed is Bdim. Bdim has a minor 3rd and a minor 5th. You should be able to figure out or research what the notes are for the chords B and a Bm. You could also use the major scale formula to obtain the B major scale and work from there.

NOTE: It is important to reference the keyboard (a real one or the diagrams) when studying this material to have a visual aid.

The major scale (as well as every other scale) has a set formula. However, if you know the C major scale and the key spacing, you can figure out the formula every time. Again, it is important to know that there are no black keys between the keys B and C, and E and F.

By figuring out all of the major scales and putting them in ascending order you end up with half of the Cycle of Fifths. This is information used for chord progressions in many songs. The numbering of the notes in the chord family (originally presented in the scale) is also often used in chord progressions of songs.

When figuring out a major scale, it is a good indication that it is correct if the 7th note is a half-step below the 8th note.

If the chords in the music you are playing are contained within the major scale, you can use that scale to solo.

Applying This Knowledge to the Guitar

Another piece of information that is important to know about the guitar is that a movement of 1 fret (up or down) is a movement of a half-step. A movement of 2 frets is a whole-step. Now you can pick out scales and chords on the guitar as well as the keyboard.

The rest is for you to explore.