Stringing and Cleaning Your Guitar

Whenever I see a guitar strung in this manner, I know I’m looking at a guitar that goes out of tune every ten minutes or less! Consider all the pressure created when a string is fully cranked to it’s proper pitch. I wouldn’t want my finger between that string and the nut! There’s alot of pressure going on, eh? Mere common sense tells you that a string wound some twenty or thirty revolutions — and rather loosely at that! — around that little peg, is gonna stretch for quite some time before all that slack is taken up! What a miserable experience! Have you ever noticed, after putting a fresh set of strings on your guitar, that it takes a couple of days before all the strings stop stretching? It’s a real pain, ain’t it? Well, let’s put an end to that, once and for all.

When I string up my guitar with a new set of sweet crunchy bronze wound honeys, and set all the strings in tune, I can put it back in it’s case and be fully confident that the next time I take it out of the case, it’ll be in perfect pitch. And here’s how it’s done:

NOTE: This illustrates the procedure when all of the tuning pegs are on one side of the neck – like a Fender Strat. 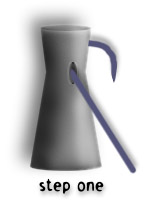 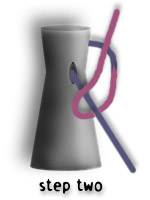 2. Next, take the other end and slip it through the appropriate tuner, at the top (head) of the guitar, and pull it all the way through the peg hole … snug … don’t pull too tight, but gently take up the slack …

4. Now, bring the string around … under … then up and over, as you bend the string back over the top (see illustration) … only, unlike the illustration, pull tightly on the string, maintaining a very snug wrap.

You do not want the string (from the bridge, up to the tuners) to be tight … you do want the wrap around the tuner to be tight. Capeesh? 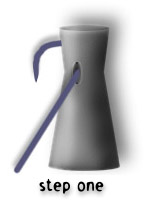 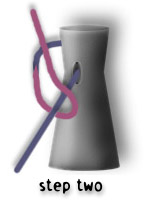 5. Start cranking the string up, and you’ll notice – as the peg turns – the string immediately bites down on itself … it will not stretch beyond that “bite” point – and therein lies the key.

6. All six tuners — I mean the part that you turn with your hand, in the interest of tightening the strings — are turned counter-clockwise, so that the string rests on the inside of each peg.

7. Tune the string up to pitch. Then, grab the string at the 12th fret and pull it up, off the fretboard, 2 to 3 inches … bearing a good amount of pressure on the string, as you stretch and pull the slack out of it. Ummm … if you don’t know your own strength, be cool about this … you don’t want to bust and snap strings here – the idea is to stretch it a little bit. Then, tune it to pitch once again.

Repeat the above “stretch.N.tune” procedure until the string no longer goes out of pitch after pulling on it – it usually takes 5-7 applications.

Finally, you can neatly coil the ends, or cut them off with a small pair of “nippers,” as I do.

Frets.com | The Wonderful Frank Ford
If you need further clarity concerning the above procedure, Frank Ford will repeat the process for you, with photographs of each and every step – including a few more cool tips, to boot! THANKS Frank!

1. Starting with the bridge, as you can see by the illustration below, you pass the string through the bridge hole, then loop it around itself and wrap it 3 times:

2. Pull on both ends to snug up the wrap as much as you can.

3. Bring the long end of the string up to the headstock … poke it through the appropriate hole … bring the string up over the tuner … wrap 3 times … and start cranking up the slack, tightening each string.

People often ask how frequently strings should be changed … but the answer to that question depends on a number of things. Once conventional strings start showing a fair amount of oxidation (darkness in color) they become increasingly difficult to tune, and their sound quality will leave much to be desired. Once perspiration gets onto the strings, and especially into the windings, oxidation begins, and consequently, sound quality rapidly deteriorates.

Everyone has different body chemistry, so some may prefer one brand over another … and you’ll find your own eventually … but, generally speaking, a new set of strings should be installed once a month – at the very least. They will lose their initial brilliance after 10 hours, or so, of playing … and after a week of daily playing there isn’t much brilliance left … though they may sound “passable.”

I use to put a new set on every week or so … but now that I use Elixir Strings, I can go 2-3 months (easy) before needing a new set! ELIXIRS are coated, so they don’t oxidize very easily and are a pretty safe bet, no matter what your body chemistry is like. Elixir’s are 3 times more expensive than conventional strings … but since they last ten times longer, I consider them to be the least expensive strings on the market! Honestly … these strings last a remarkably long, long … long time.

Regarding acoustic guitars, wax is not cool … and non-drying oils (like lemon oil) are even worse. Oils, waxes, and silicates penetrate the finish, entering the wood itself … and over a period of time, they’ll add a density to the wood that detracts from it’s resonance. These “nasties” also turn simple repairs into nightmares – ask any experienced luthier, and you’ll find no question about the matter.

The more the wood DRIES and ages, the more resonant and rich it’s sound will become.

Generally, wiping the guitar down, with something like a chamois cloth, after each playing session, is all the maintenance your guitar will ever need. Most players have it backwards — over attending to waxing and fretboard lubricants (bad stuff!), while abusing the wood by not keeping the guitar in it’s case, where it should be whenever it’s not being played.

I like to clean my guitar when I change the strings, so I can get at all those spots UNDER them. A damp rag is all that’s needed – dipped in a little water, and wrung dry. Put some serious elbow grease into it though, with a soft, non-abrasive cloth (like an old t-shirt) … and wipe the guitar down thoroughly – same for the fretboard. A little Murphy’s Oil Soap, diluted with water (as instructed on the bottle) is excellent! Don’t worry about the water: STANDING water is what damages wood — we’re talking about a damp rag.

After a few years, you may want to remove the “grunge” off your fretboard by giving it a very light brushing with #000, or #0000 steel wool. And if you want to use a polish, use Martin Guitar Polish (the only one I’ve ever heard confidently recommended by luthiers) … but not on the fretboard! If you want something for the fretboard, luthiers recommend almond oil … just a drop or two … once per year.

Learning to tune your guitar is a process that takes time, and kind of grows into a maturity over the first few years of playing. You have to develop an “ear” … you must become familiar with the nuances of what’s “sharp” and what’s “flat” and what’s “in” pitch. I think a good practice excersize is to play with one note … tuning it to pitch … raising the pitch and *hearing* what “sharp” means … lowering the pitch, and *hearing* what “flat” means, and so on.

NOTE: Electronic tuners are great tools … especially on stage, when it can be hard to listen to the pitch variances involved in tuning. But aside from the stage, you should learn to tune your guitar by ear. The more familiar you become with tuning by ear, the better you will be at discerning the accuracy of what you’re doing, even when you are using a tuner. Don’t develop a lazy ear by using the tuner all the time!

Alan plays acoustic 6-string guitar, uses "open" tunings, and sings his songs with raw sincerity. He has recently added dulcimers, autoharp, and octave mandolin to his show, and via his site's "JAM!" link, Alan offers a host of cool resources and links for guitarists, dulcimerists, Autoharpists, and songwriters. Check out AlanHorvath.com.