The King of Love My Shepherd Is

One of my favorite hymns is “The King of Love My Shepherd Is.” This hymn first appeared in the appendix of the Anglican hymnal Hymns Ancient and Modern in 1868. The words were written by the hymnal’s editor-in-chief, Henry Williams Baker (1821-1877). The original tune for the hymn, “Dominus Regit Me” (the Latin title of the 23rd Psalm, on which the text is based), was written by John Bacchus Dykes (1823-1876). Dykes’ melody is probably the one most often associated with this hymn (it was the tune used for “The King of Love” when it was sung at Princess Diana’s funeral at Westminster Abbey in 1997). However, another tune is also commonly associated with “The King of Love,” a traditional Irish melody titled “St. Columba.” This melody comes from George Petrie’s The Petrie Collection of the Ancient Music of Ireland, a nineteenth-century collection of Irish music first published in 1855.

I’ve used the DADGAD tuning for this arrangement, and as it’s not too technically demanding, you can focus most of your energy on the feel of the piece. Play the tune at a nice moderate tempo and try not to rush. Allow the melody notes to sustain and ring together where ever possible, which will give the piece a harp-like sound. For example, in bar 2 I play the last two eighth notes of the measure using the open G and A strings, letting them ring together briefly. Hold each bass note for its full value, which will give the bass line a nice stately feel. I also let the bass notes ring together for the most part, but I do dampen the fourth string open D with my left hand ring finger when moving down to the C# in bars 2 and 6.

Feel free to contact me with any questions, comments, or suggestions. Just send me an e-mail via the contact form on my web site or directly at [email protected] 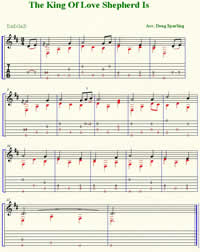