Oops – forgot I need to write in Human/English! And you’ll have to forgive me, because while I can write in English, it’s certainly not my first language. But I hear it every day and read it as well although I never speak it myself. In that way, I’m kind of like Tarzan in the original novel by Edgar Rice Burroughs (and I guess that points out the advantages of being able to read). 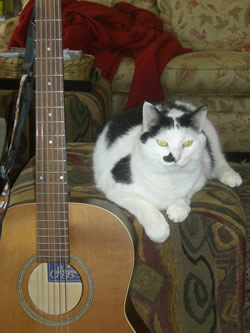 My name is Charles T. Cat – but you can call me Charley. I prefer that you do. The little joke around here is to call me “Charley Paka” – “Paka” being Swahili for “cat” and the whole thing sounding like a New Englander trying to say the name of the legendary jazz sax player.

Anyway, I’m David’s cat and I’ll be filling in for him by writing this newsletter, the April 15 edition of Guitar Noise News. Now, you might have been thinking that David’s mention of me taking over for him (in the April 1 Guitar Noise News) was a bit of an April Fool prank, but I can assure you it wasn’t. He’s currently in Italy, tagging along on a writers’ conference and, hopefully, enjoying himself. I told him that there’s no reason for him to even look at a computer while away and he’s usually pretty good at following my advice.

In case you’re interested, you can see a picture of me at David’s Photobucket page, right here.

This photo was taken at Animal Dreams, an organization that rescues feral cats in the Berkshire County of Massachusetts. That’s me at the back left. Lily (short for “Diamond Lily”), who also lives with me at David’s place, is obviously on the far right. In between are Snickers and Chipper, whom I hope have found a good home since we last saw them.

Even though I’ve never played a guitar (piano is another thing altogether!), I’ve listened to a lot of guitar players and also have sat in on many of David’s private lessons. So I hope you’ll accept me as part of the Guitar Noise community, at least for the writing of this newsletter.

One thing I do share with David is our dislike of sitting down at the computer when there is so much of life going on beyond the corners of one’s monitor. Now sitting in a patch of sunlight and thinking about how good life is may not sound all that important, it may even sound downright boring to some, but I can tell you that it’s pretty much what life is supposed to be about. That and playing music or listening to someone play music…

And speaking of music, I think this is where I’m supposed to tell you about the new lessons that have gone up at Guitar Noise since the first of the month…

Finger style guitar is easier than you think! In this lesson we’ll start with the very basics and get you going on some very cool (and very simple) finger picking patterns. Plus, we’ll toss in Bob Dylan’s Blowin’ In The Wind as an incentive to help you practice more!

There’s a little bit of everything in this lesson, from easy arpeggios and strumming to some basic Travis style finger picking patterns. As always, David picks the song apart into small pieces that even many beginners can get with some concerted practice. Have fun learning this Harry Chapin classic!

Technically, I’m not a member of the staff. At least, not any more than Paul’s three cats are on the Guitar Noise staff. But we do listen to a lot of music. I could get all cute and recommend something from the Stray Cats’ catalogue or that stunning jazz guitarist, Sheryl Bailey’s last CD – Live @ the Fat Cat, which gets a lot of play at this house and which David reviewed when it was released.

Instead, I’d like to tell you about “1000 Years of Popular Music,” a combination CD / DVD performance by Richard Thompson (who, much to David’s regret, is playing seven miles from here this Saturday). This is a stunning concert that was born from one of those pompous “Name the 10 greatest songs of the Millennium” lists so popular in magazines if for no other reason than to have people argue over the silliest of things. When Thompson was asked to participate, he took the list makers to task, giving them songs that did indeed span a thousand years. They never used his list, but it ended up becoming a great show for this legendary guitarist and songwriter.

You’ll find more than twenty songs, written over the course of ten centuries, from old British folk music (if you’re wondering how old, try 1260 AD) to Bowling for Soup. You get Thomas Morley, Glibert and Sullivan, Cole Porter and Ray Davies all on the same bill.

If you’re interested in music history or just like to discover the beauty of songs and songwriting (not to mention the art of arranging), this is a great place to start.

Here are a few ideas for picking out hi-velocity melodies by ear.

A straightforward way to do this is to get software or hardware — like machines made by Tascam — that slows down melodies enough for you to hear the individual notes. Those machines have their place, but if you are slowing down everything you want to transcribe, you’re cheating yourself of a great chance to build your ear.

Someone who can successfully transcribe fast melodies is someone who uses everything he knows about music to make educated guesses at what he’s hearing. He takes the key center, the last few chords played, the scales most likely used by the guitarist he’s transcribing (e.g. Clapton and SRVaughn; heavy pentatonic usage), and other factors that are separate from the actual notes, to drastically narrow down the possible sources of melodic material. In other words, the more theory you know — especially theory related to the genre of the music you’re transcribing — the better.

Once he’s got all that info down, the successful transcriber may listen for the shape of the line. You can actually draw this. Is the line dipping down or moving up? Listen for repeated patterns, e.g. 1 3 2 4 (C E D F in C major), and also very important, the melodic rhythm. Tap out the rhythm of the line. Also, listen for pauses in the line. and identify the notes at those pauses.

Another big, big help: scatting/singing. Even if your pitch is way off, singing gets you inside the music, which gives you a fresh perspective on the line you’re transcribing. And you can scat to some pretty fast lines, faster than you can play. Then, you can slow down your singing so your ear can pick out the notes.

David got the following email right after the April 1 newsletter:

Before you go off to Italy, make sure to let Charley know to include this date in the next newsletter:

Kathy Reichert and the Company She Keeps will be playing Friday, April 18 at Borders Books and Music, 595 Central Avenue in Highland Park, Illinois. The show starts at 8:30 PM.

Having met Kathy the last two times she was here, I’m more than happy to include a note about her performance later this week. “The Company She Keeps,” includes two contributing writers to Guitar Noise – Mike Roberto on guitar and Helena Bouchez on bass – plus the incomparable Anne O’Neil on percussion. Plus, rumor has it that John Reichert (who is a terrific photographer, in case you didn’t know) might be making his long awaited musical debut and playing bass guitar on a few songs.

Plus, Kathy and her whole band will be back here in the Berkshires to play at the Monterey General Store (Monterey, Massachusetts) on Friday, May 2. Local guitarist and songwriter (and Guitar Noise Forum stalwart) John “the Celt” Roche is also scheduled to pop in and perform a song that he recently wrote for Kathy as part of a recent Sunday Songwriters Group assignment.

It’s incredibly interesting that many people think that cats don’t listen. Just because we don’t come when we’re called (but some of us do) or respond to English, French, Spanish, Hebrew, Swahili, Urdu, Chinese, Japanese, Portuguese, German, well, you get the idea.

But cats do listen. It’s actually an incredibly important part of our lives. I mean, aside from being able to tell the brand name of a can of tuna being opened in an apartment five city blocks away, listening is what keeps us in touch with the world. People are always saying someone has the “eyes of a cat,” but the ears are important, too. All of our senses are, no?

So it’s curious to me how many people approach learning a musical instrument from a strictly visual approach. Does that make sense to you? Watching someone perform music is often like watching a magic show. The hands don’t always tell you what’s going on. Sometimes they can be deliberately misleading you. Smoke and mirrors.

Darrin’s tip in this newsletter offers some great advice, as do the many articles and lessons on ear training here at Guitar Noise. The next song you hear, see if you can pick out a chord voicing. Which chord has the distinct chime like a D chord? Can you pick out the difference between a three-string and a two-string power chord?

Buy or borrow a book of transcriptions of songs you know and compare what your ears hear with what’s written on the page. This is part of learning guitar (not to mention music) that you can do without an instrument in hand. You might even get to the point where you can start hearing music when you are in reality only looking at it.

Thanks for letting me ramble a bit. Not to mention having me try my paw at the newsletter for a day. I hope you enjoyed it. Now it’s time for a bit of a nap!

Oh, if you want to write me, email David at [email protected] and write “For Charley” in the subject. He won’t be able to let me read them until he gets back, but that will be sometime next week.