Since I recently got into slide guitar, I bought myself a set of finger picks, for playing with the guitar on my lap. These are the “standard” type of fingerpick (you can see one of them on the right of the first picture) and are from Dunlop. I found very quickly that I wasn’t going to get very far with them, I felt that my fingers were nowhere near the string, when I picked and I had absolutely no feel, either for the string or for picking strength. 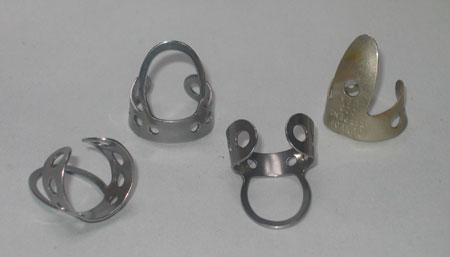 Soon after, I came across a different style of finger pick, sold under the name Pro-Pik. The idea of this design is to try to emulate the fingernail, rather than make a metal finger pad. On Ebay, I found an auction for some similar picks, made by a company called Dadi, 3 finger picks in stainless steel for Â£3.49 + P&P – the bid went in, the payment made and they were on their way. 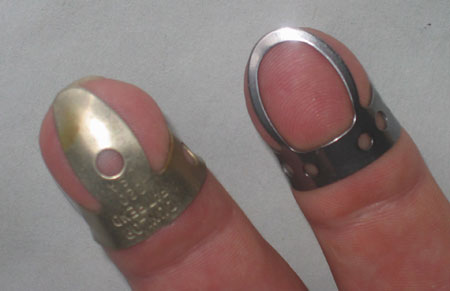 So, how do they play? I was, frankly, amazed at the difference they made – it was almost like playing without a pick. The “arch” of the steel “nail” allows plenty of space, for the finger pad to contact the string, before the metal “nail” produces the sound. These fingerpicks give you the same timing and tactile control as when you normally use only your fingers. They also allow you to judge the weight of the strike much more accurately. Playing with Dadis fingerpicks is very close to playing without any pick at all, with the point of strike very close to the tip of the finger.

I’d recommend this type of fingerpick to anyone who plays with fingerpicks. The time it takes to get used to them is going to be longer for those who are used to traditional fingerpicks, because it’s making a lot of what you’ve had to get used to redundant. Those who use bare fingers will notice less and find them easy to adapt to.