The Maxon Distortion and Sustain II is an incredibly nice stomp box. It uses a dual op-amp design with increased low-end, output and gain. 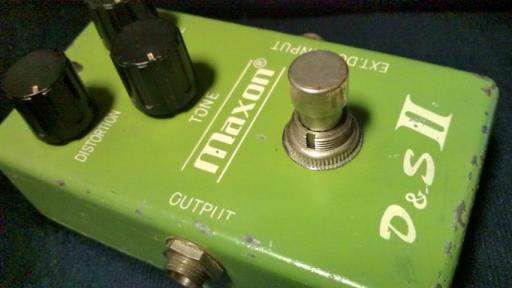 What does this mean? A nasty little distortion box with all the sustain you want. Really nice! The distortion is not clean, not what I’d use throughout a show or album, but certainly something that is incredible for emphasizing parts of a song when you really want the distortion to resound and be present. With the added sustain, it’s just brilliant!

It has two large buttons, one for distortion and one for tone, and a smaller one for balance. So this is well thought; you don’t have to fool around with it for hours to find your setting and you can change them in seconds if you need to; a nice thing to have on the road.

Quite solid too. A nice metal box, input and output on the sides, battery or adapter-powered. The only thing I’m not crazy about is the four screws on the bottom to change the battery. Then again, if you use and adapter, that shouldn’t be a problem.

As I said, quite solid, so nothing to worry about when you kick it or if it falls of the stage or if your band’s drummer decides to throw it across the room in a fit of rage. Just pick it up and plug it; it’ll work fine.

Recommended price is $170. A little bit steep, but you do get your money’s worth out of it. As I said, I’ve been using it for emphasis and it adds a whole new level and colour to the songs. Play with the tone and balance and you’ll get a solo that will resound and last and that’ll really have people listening. A must.