Nighthawk, Marilyn Miller’s debut CD is a testament to her love of music as well as to her hometown (and the people of), Hudson, New York. The ten songs on this album span genres, from heavy hypnotic Neil Young rock of the album’s title track to whimsical country and folk of “Crater” and “Dancing Tonight,” from the angry punk of “Crash and Burn” to electric boogy-blues of “What Is It?” and the hauntingly beautiful piano and viola interplay of “Early Spring.” There’s a song for practically any mood you might happen to be in. 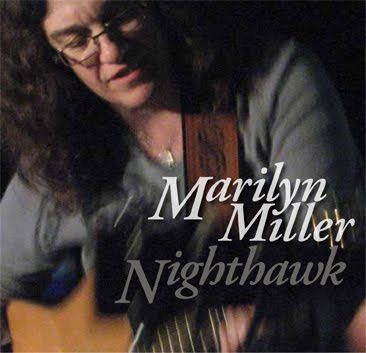 Marilyn’s put together a great group of backing musicians for this disc, featuring amazing electric guitar and pedal steel guitar work by New Yorker Keith Haman and haunting violin and viola courtesy of Eric Martin, and she herself delivers a honest and emotional performance.

You can hear and download Nighthawk in its entirety at Marilyn’s website, Marilyn Miller Music. You can also catch her performing locally in Hudson and the surrounding Columbia County area.

Lily (short for "Diamond Lily" on account of her nose) considers the day she met Charley T. Cat in foster care to be a huge turning point in her life. Bonding with Charley led to the two of them being adopted by a pair of music teachers / writers in Egremont, Massachusetts. She loves music and hopes to be able to bring some of her latest favorites to the attention to the readers of Guitar Noise.