“I never met a more generous kind of musician. He is more about the musical communication than showing off with hot licks. … He seems to always know what notes to play. They’re always the perfect notes. He helped me learn the space between the notes is as valuable as the ones you play.”  – Sam Bush

“I’m not a legend. I’m just someone who enjoyed the music and who enjoyed playing music.”  – Doc Watson

Arthel Lane Watson was born in March, 1923 in Deep Gap, North Carolina, a small unincorporated community in Watauga County. This same county, nestled in the Blue Ridge Mountains, was also the birthplace of Albert Green Hopkins, considered by many to be one of the pioneers of hillbilly and country music. Before his first birthday, Watson lost his eyesight. His parents taught him to be able to care for himself and he worked hard to do so.

His parents also brought the joy of music to him. His mother sang, as did his father, who also played banjo. Watson himself would be playing the banjo and harmonica by the time he was five years old.

“My real interest in music was the old 78 records and the sound of the music. I loved it and began to realize that one of the main sounds on those old records I loved was the guitar.”

“I just loved the guitar when it came along. I loved it. The banjo was something I really liked, but when the guitar came along, to me that was my first love in music.”   – Doc Watson

According to a National Public Radio interview, Watson’s father helped him to get his first guitar, a Stella from Sears for about ten dollars, by suggesting the young Watson (and his brother, David), chop and clear the dead trees along the border of their land and sell the wood. The Carter Family’s song, “When Roses Bloom in Dixieland,” was the first song he learned on his new instrument. He practiced hard and he and his brother Linny could soon be found playing on street corners in nearby Boone, North Carolina.

He took up electric guitar as well. And he got a nickname. Playing a live radio performance before a live audience, it was pointed out that “Arthel” was a little unwieldy and suggested he might go under a stagename or nickname of some sort. Someone in the crowd suggested “Doc” and that was good enough for everyone.

When he was thirty, Doc Watson was playing electric guitar for a western swing band led by Jack Williams. The band often got gigs at square dances, but since they didn’t have a fiddle player, Watson would play the fiddle tunes’ melodies on his Les Paul, often at fantastic speeds. And then he started to do the same on the acoustic guitar.

“And people all over the place were trying to figure out how to do this. But Doc, he set the bar for everyone. He said, ‘This is how it goes.’ And people have been trying for years to match that….”He took it (the guitar) out of the background and brought it upfront as a melody instrument. We’re no longer at the back of the class. He gave the front to us.”  – Peter Huttlinger

Seven years later, Watson caught the attention of Ralph Rinzler, who also managed Bill Monroe. Rinzler advised him to ride the growing wave of the folk music revival and to play just the acoustic guitar and banjo exclusively. Three years later, Watson was playing the 1963 Newport Folk Festival. His first recording contract, and the first of the sixty albums he’d record, came the following year.

1964 also marked the beginning of Watson’s touring and recording partnership with his son, Merle – Eddy Merle, actually, named after country music legends Eddy Arnold and Merle Travis. Father and son toured and recorded together for fifteen years, picking up Grammy Awards for Best Traditional Recording in 1975 and Best Country Instrumental Performance in 1979.

In 1985, Merle died in a tractor accident, leaving Watson devastated. Although he seriously considered retiring, instead he choose to honor Merle and the music they played together by founding “MerleFest,” held every year on the Wilkes Community College campus in Wilkesboro, North Carolina.

“When Merle and I started out we called our music ‘traditional plus,’ meaning the traditional music of the Appalachian region plus whatever other styles we were in the mood to play,” Doc Watson is quoted as saying on the festival’s website. “Since the beginning, the people of the college and I have agreed that the music of MerleFest is ‘traditional plus.”‘ – Doc Watson

All told, Watson recorded some sixty albums. He received seven Grammy Awards, including the 2004 Lifetime Achievement Award, and was awarded the National Medal of the Arts from President Bill Clinton in 1997.

But perhaps most telling honor is this, in 2011 a lifesized statue of Doc Watson was erected at the intersection of Depot and King Streets in Boone, North Carolina: 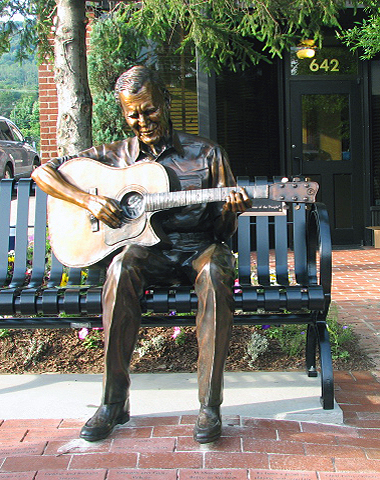 And on the plaque, at Watson’s personal request, it reads simply this:

Just one of the people.