On Gifts and Giving – An Interlude for the Holidays

I get in these moods sometimes. Nothing serious. Well, nothing too serious (my friends will tell you that I’m always serious)(especially when I’m joking). Sometimes I just have to drop everything that I’m doing and play my guitar. Just a quick song. Maybe even one chord or one phrase. It’s just something needs to be voiced right now at this moment and I’m not going to have any peace until I hear the notes aloud.

I’m lucky in this way. Unless I’m traveling without an instrument, I almost always have an outlet close by. Since I often teach after work (my “real” job), I usually have a guitar at the office. While the weather holds, I can play outside during my lunches.

I’ve also been fortunate this past year in having more opportunities to play and to teach. One of my old band mates got married over Labor Day, so we had reunion of sorts. In August, I hosted a “last Friday the 13th of the century” jam at my home. Some old friends and new students got to sit in together. But to me the best part was having some of my friends’ kids getting in on the act – playing bongos or triangles or maracas while the “adults” jammed away on the “big person’s instruments.” Nothing is as thrilling as being part of the band, no matter what age you are.

It’s funny that I’m always being reminded of the fact that music is a medium that really works when it is shared. You’d think that it would be second nature to me by now, but it’s not. Because music gives me such a high, even just practicing on my own, I often forget (to the point of actual surprise) how that thrill is multiplied when I’m playing for other people. And even more so when I’m playing with other people.

I’ve been on the receiving end of music’s gift more times than I could ever hope to begin to remember. And in places where I least expected it. The first two nights a friend and I spent on Crete, we dined at restaurants where live bouzouki music was performed. At the second spot, it seemed like all the patrons knew the lyrics to every single song. It was wild to sit and listen to everyone singing joyfully in Greek. On the island of Santorini, the night clerk at our hotel introduced us to the work of Goran Bregovic, a contemporary classical composer of “Balkan” music. We would drink in his haunting orchestrations with our wine while watching the incredible sunsets from a terrace on the caldera.

In Marrakech, I sat raptly in the Djemaa el-Fna, taking in the Berber stories accompanied by the almost blues-like playing of the amzhad and rbab. Children in the medina would form impromptu parades, banging on various drums and cymbals or playing flutes as they wound their way through the narrow cobbled streets. And even though I rarely recognized a word, I knew if it was a happy song or a sad one, a refrain of religious awe or a reverent tribute to heroes long gone to the gods. 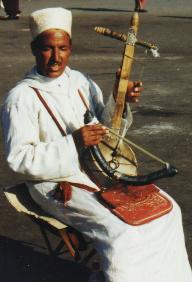 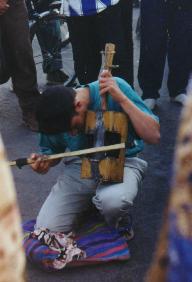 Here at home, I am fortunate to live in a city where there is always something going on musically. Summer in Chicago is virtually three-and-a-half months of free music in venues framed by the majestic skylines and the lakeshore. Every weekend boasts a different neighborhood festival of one sort or another and there’s bound to be good local bands vying for their shot at fame. Even the Starbuck’s Coffee shops get into the act and showcase area talents one or two nights a week. The only way to avoid being exposed to all the music is to shut yourself inside your house from Memorial Day to Labor Day.

Over the holidays I tend to take stock of things, especially what I’ve been able to accomplish and what I’d like to do in the upcoming year. Until this year, I never fully realized how much music played a part in the goals I have in life. No, nothing like “I’m going to record a top forty record” or “I’m going to be the headliner at Taste of Chicago” or anything like that. “I’d like to take on two more guitar students,” “I could learn one new song a week” or “I plan to finish the four songs I started writing last summer” might be more my style. You make think it laughable, but it’s important to set goals and it’s important that they are realistic expectations. Just as you shouldn’t go aimlessly through life, you should be setting yourself up for self-imposed letdowns either.

Regardless of your level of playing ability, the fact that you do play is a gift. A precious gift. And this is a good time to think about how you can use your gift to enrich not only your life, but also the lives of those around you. If you don’t have the time or patience to teach, you can still be an inspiration. If you have an old instrument you’re really not playing, loan it to a friend who’s been keen to take it up. Go to see a local group – support the people trying to live their dream. Share your passion for music with the world. Especially with the children.

I keep having this recurring dream – the setting and the characters change constantly but essentially the event is the same. I’m with a large group of people, some are old friends I haven’t seen in years and some are complete strangers. We exchange stories and techniques and laughs and fears and hopes and dreams and whatever. And we play. We teach each other our favorite songs; we learn to play songs the other has written. Someone figures out a great lead line. Someone else chimes in with an otherworldly harmony. And all the people who “can’t play” are playing percussion toys and singing along. It’s all gloriously exhilarating – slightly out of tempo and just enough out of tune to be able to notice (if you were looking for it) and close enough that nobody really does. Every now and then, though, it all comes together in such a way that takes our breath away. And I know why it works, why all these people who might not give each other the time of day in real life are now blissfully enjoying themselves:

Everybody’s in the band.