The Only Theory Lesson You’ll Ever Need – Part 1

Just saying the words can make a guitar student’s eyes glaze over, like we’re about to launch into a trigonometry class or something.

Honestly, it’s not all that difficult to understand, if you put a little mental energy into it. And theory is very logical, so the elements tend to build on one another in a clear, sequential manner.

But some folks have such a lack of confidence in their ability to comprehend complexities, that the idea of music theory immediately deflates them. Never fear! JB is here to simplify and demystify! Follow along as I take you through the only theory lesson most guitarists will ever need – and I’ll make it fun and easy to understand as a bonus!

That’s a bold statement to be sure, but most guitarists don’t need to know tons of theory to be successful. Learning about modes, improvisational concepts, advanced rhythms and chord formulas is great stuff, if you want it and need it. Theory geeks like me thrive on it. And if you aspire to be a professional player, you’ll clearly benefit from it.

But for the everyday player who just wants to get a handle on the “whys” and the “hows” of music, this is the stuff you need. This one lesson (written in three easy-to-digest parts!) will:

Now, who wouldn’t want that? In the immortal words of Marvin Gaye, “Let’s get it on!”

Building our House, in Theory

Since the elements and concepts of music theory build on each other, we’ll begin with the very basics to ensure that our foundation is strong and there are no gaps in our knowledge. Please be patient and read through the stuff that you think you already know – you may be surprised to find that some things aren’t as clear as you originally thought. And put your thinking cap on “˜cause theory ain’t for sissies.

Musical notes, or pitches, are assigned letter names using the first seven letters of the alphabet: A, B, C, D, E, F and G. These notes are also referred to as the natural notes. The musical alphabet is a “looped” sequence, with no real beginning or ending. After G we continue again with A, B, C, etc., just like we would continue with 0 after 9 in our numbering system (0123456789, 0123…). 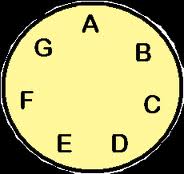 An octave is the span of eight letter names. For example, if we count through the musical alphabet starting at C and we end up on the next C higher – C, D, E, F, G, A, B, C – we’ve just counted through an octave. A musician would say that the last C is an octave higher than the first (or vice versa, the first C is an octave lower than the last).

A suggestion: practice saying the musical alphabet backwards. Why? Because in the real world of music performance, notes travel both forwards and backwards – and also make random jumps – so it makes sense to learn to visualize notes moving in both directions. This is not the most intuitive thing for non-musicians, and sometimes even my best guitar students have a brain cramp trying to do it, but it’s extremely helpful!

Half Steps and Whole Steps

We determine the relationships between pitches by the distance between them, and that distance is measured in half steps and whole steps. The half step is the smallest distance you can measure and is represented on the guitar by one fret (or one key on the piano). A whole step is equal to two half steps and is represented on the guitar by two frets (or two keys on the piano).

In the musical alphabet, the pitch combinations of E/F and B/C are natural half steps. The guitar fingerboard will confirm that E and F are only one fret apart, as are B and C. An example would be E on string 5/fret 7 followed by F on string 5/fret 8.

All of the other pitch combinations – A/B, C/D, D/E, F/G and G/A – are a whole step apart. Looking to the guitar for confirmation, A and B are two frets apart on string 1 (frets 5 and 7, respectively), as just one example.

Check out this graphic and note where the natural half steps and whole steps fall:

Critical Point Alert! It is very important that we remember the natural half steps of E/F and B/C going forward, since we will be called upon time and time again to apply that knowledge in building scales and chords. If this critical piece of foundational info is forgotten, then any scales or chords built on that foundation will be ultimately flawed.

Although there are seven natural notes in the musical alphabet, there are actually twelve notes total in the chromatic scale (a fancy-sounding term for “all the notes”).

The other five notes fill in the whole-step gaps between some of our natural notes. Those “in-between” notes are known as accidentals. “Accidentals” is the umbrella category into which sharps and flats fall. A sharp (#) symbol, when attached to a natural note, raises that note by a half step. For example, F is found on string 6/fret 1, while F# is a half step higher at fret 2.

By contrast, a flat (b) symbol, when attached to a natural note, lowers that note by a half step. For example, B is found on string 6/fret 7, while Bb is a half step lower at fret 6.

To summarize, if we add together all of the natural notes and all of the “in-betweens” (the accidentals), we wind up with the twelve notes of the chromatic scale:

As you can see on the diagram, the accidentals present an interesting situation, because each one of them – being in between two natural notes – can actually be called by two different names. This concept is called enharmonic equivalents, and although it’s a technical-sounding term, it’s common, everyday stuff for musicians.

How do we know which name to use? Good question, and one that will be answered later in this lesson when we learn how to build major scales. Until then, just make sure that you can quickly name any accidental by its sharp and flat names.

Now, at the risk of throwing you for a musical loop – and to get in a preemptive strike on any theory nerds that may want to call me out on this – I will confess that, as a technicality, there are situations where you might call the F note “E#” or the B note “Cb“. However, that is well beyond the scope of this particular lesson and, truth be told, in most of the music you are likely to encounter as a guitarist, regardless of what genre or style you play, the likelihood of running into an E# or an Fb is one (or less) out of every 100 songs you play! For me, that percentage is low enough that I teach my students to safely disregard the enharmonic equivalents for E/F and B/C. If you aspire to play jazz or classical guitar, then at some point you will have to learn how and when to apply accidentals to the natural half steps. Until then, no worries!

Now that we’ve laid the foundation, we can get into building scales and harmonizing them with chords, which is where the language of music really comes alive! Those musical goodies will be covered in Part 2 of this series.

More from this series

Jim Bowley spent 20+ years as a performing and recording guitarist, vocalist and songwriter. He currently spreads the guitar gospel via his website, jimbowley.com, and his Bel Air, Maryland-based private studio. You can also find Jim on Facebook discussing all things six-string.