The Only Theory Lesson You’ll Ever Need – Part 2

In Part 1 of The Only Theory Lesson You’ll Ever Need, we covered the foundational elements of music theory: the musical alphabet, the concepts of whole steps and half steps, and the use of accidentals (sharps and flats) to fill in the blanks between natural notes.

In Part 2, we’ll use that information to take the next step forward: constructing major scales and understanding keys.

Major scale construction is one of the most important things you could ever learn in music theory, since everything else is built upon this foundational concept. And gaining insight into scales and keys teaches us how notes are related within a musical “family”, and what notes tend to complement each other in melodies, riffs and solos. Let’s get it on!

A major scale is a sequence of seven notes (plus the octave note) that sounds like the familiar do-re-mi-fa-so-la-ti-do. It can be built from any starting pitch, and that pitch gives the scale its name. For example, if we build the scale from the starting pitch C, we would get a C major scale. Makes sense, huh?

Constructing the scale correctly is simply a matter of picking a starting note (which is called the “Root”) and then applying the major scale formula of whole steps and half steps, as shown here:

It’s because all major scales follow the same formula of whole steps and half steps that we can achieve the same do-re-mi sound off of any starting pitch. As long as we follow the formula accurately, we’re able to maintain consistent relationships between the notes, which ensures that all of our major scales – no matter the starting pitch – sound like do-re-mi.

Let’s build a major scale from scratch. Using our previous example of C as our starting pitch, we’ll apply the major scale formula as follows:

The C major scale, then, consists of the notes C-D-E-F-G-A-B-C, and, when played, it sounds like do-re-mi. You may also note that the C scale is constructed from natural notes only, as it needs no accidentals (sharps or flats) to fulfill the formula. Since all major scales are unique, the C scale is the only one with no accidentals; every other scale has its own number of sharps or flats.

Once you’ve learned how to construct a scale, it’s good practice to also think of the notes in terms of their number, or scale degree. For instance, in the C major scale, C is the “1”³ (or root note), D is the “2”³, E is the “3”³, etc. This will come in handy later, when learning to build chords and transpose to other keys.

Before we move on, there are two special rules to follow regarding major scale construction:

1 – All letters must be represented once and only once.
2 – We use either sharps or flats to complete the formula, never both.

Keeping this in mind, let’s try another scale from a different root, or starting pitch: G.

Why F#? Remember that E/F are natural half steps. However, in order to fulfill the formula, we need a whole step above E, so we would travel a half step to F and another half step to F#.

Picking the note F# rather than Gb, its enharmonic equivalent, is important because it follows the “each letter is represented once” rule. It also creates the concluding half step to G – perfect!

For a final example, let’s construct the major scale starting from F so we can see accidentals from a different perspective.

The F major scale, then, consists of the notes F-G-A-Bb-C-D-E-F.

Why Bb? Remember that A and B are a whole step apart. In order to fulfill the formula, though, we need a half step above A. Since we’ve already used the note A, we would not call the target note A#, but rather by its enharmonic equivalent, Bb. The pitch Bb is a whole step from C, so it fulfills the formula moving forward as well.

I would recommend that you practice writing out some of the more common scales. Having major scale construction at your fingertips is a great foundation for learning about chord construction, one of the major elements of guitar theory. The scales I usually recommend – besides C, G and F – are: D, A, E and Bb. As a challenge, try writing them out now following the above process and I’ll put the answers at the end of this lesson post. Feel free to download and use the handy-dandy Major Scale Worksheet I’ve put together.

Of course, the major scale is what a musician is referring to when he/she says, “This song is in the key of ____.” 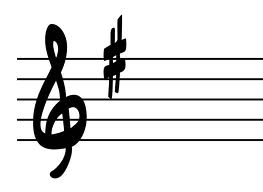 Music Reading Alert!: The key can also be determined by looking at the far left of the staff on traditional music notation. The accidentals in the key of the song will be represented on their respective lines of the staff in what is called the key signature. So a song in the key of G, for example, would have one sharp (F#) located on the top line of the staff, which is where the F note is positioned. This indicates to the musician that all F notes are to be sharp throughout the song, keeping us nicely in the key of G.

The notes that occur naturally in any key – that is, the notes that we derive by using the major scale formula – are called diatonic notes. They are “of the key”. Most of the notes of a typical pop song will be diatonic. However, if all songs contained only diatonic notes, then all songs would sort of sound the same. To add a little spice to your musical gumbo, many songwriters will sprinkle in a few notes that do not occur naturally in the key. These “outside” notes are called non-diatonic.

Now before any theory nerds beat me to the punch, songs do not only have to be in major keys, with major scales as their basis. Some songs are in minor keys, or even use modes (variations on the major scale, which we’ll save for a future lesson). But minor keys and modes flow from the major scale concept, so for this lesson, let’s just stick with the major scales/keys to avoid unnecessary confusion.

In Part 3 of this series, we’ll explore the final piece of the theory puzzle: harmonizing the major scale with chords and learning to transpose to other keys. Stay tuned!

More from this series