The Shape Of Your Acoustic Guitar

Beginning guitarists have a lot to deal with. You’ve got chords to learn, strings to strum, frets on which to place some of your fingers at certain times and open strings that you may or may not play depending on what chord you want. Many times a beginning guitarist – whose head is first looking at a chord chart, then at the neck of the guitar, then at his fretting hand, then at his strumming hand and then at the chord chart again, etc., – looks more like a bobble-head doll than a musician.

And all of this often occurs long after making the decision as to which guitar to buy in the first place!

Without knowing it, a beginning guitarist can make a choice of instrument that may hinder his or her progress as a player. This is true of all guitars, whether electric or acoustic but in this article we’re going to focus on one particular aspect of the acoustic guitar and that is its body shape.

Most people typically divide guitars into two classes – acoustic and electric. “Acoustic” in this particular case simply means “not electric,” which can get a bit confusing when talking about classical guitars or “electric-acoustic” models.

It has become more a convention these days to think of guitars in three distinct types – classical guitars, acoustic guitars and electric guitars. There are, of course, exceptions, not to mention many different “sub-categories” within each type.

For our discussion, we want to think of “acoustic” as “metal string flat-top guitars that do not require amplification.” “Acoustic” is certainly a lot easier to say than all that! Acoustics differ from classical in one main aspect. The strings of a classical guitar are nylon while acoustics are metal.

But it’s also important to realize at this point that acoustics have many shapes. When someone says “acoustic guitar,” we may have a general picture in our head but we don’t always give that picture a distinct shape.

Most acoustic guitars are what are called “dreadnought” style. Here is a photo of both a classical guitar (on the left) and a dreadnought style acoustic (on the right). Also please note that the guitars in all the photos in this article, being my guitars, are left-handed models since I play left-handed: 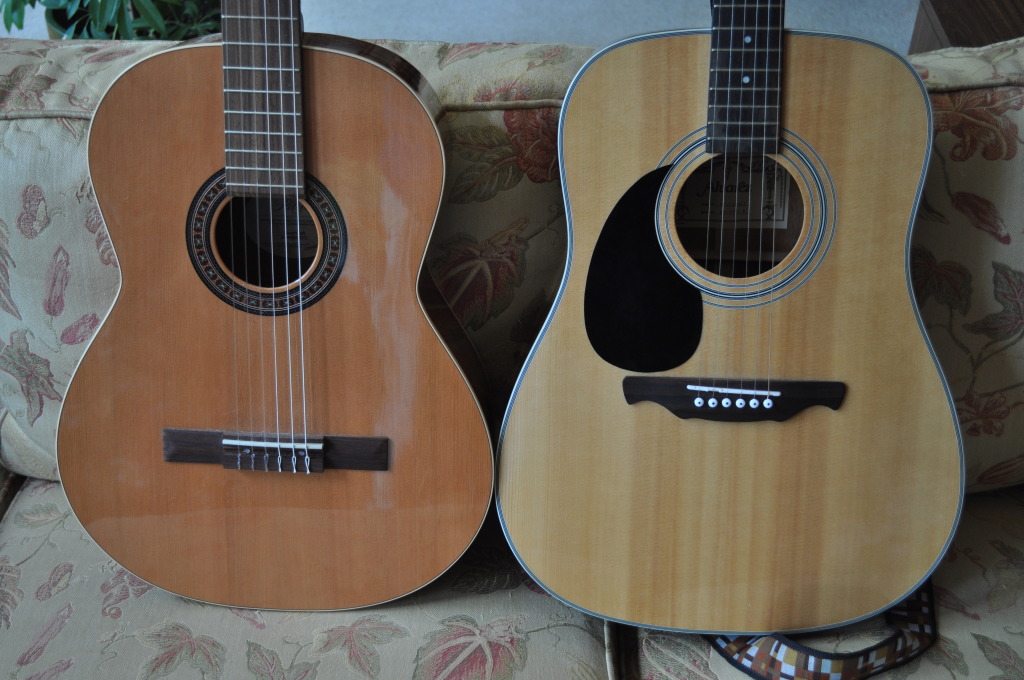 Classical guitars are direct descendants of the first six-string guitars that began to appear at the very end of the 1700’s. Besides having nylon strings, they are usually slightly smaller than typical acoustic guitars, particularly the dreadnought style. Classical guitars usually have a wider fingerboard and slightly shorter necks. The fretboard joins the body at the twelfth fret instead at the fourteenth, as most acoustics do.

You can see that, compared to the classical guitar shape, the dreadnought is bigger and boxier. Its “hips” are not as defined, the body is more rectangular than rounded. It’s like someone was trying to carve out a classical guitar body but didn’t have the confidence to make it come out as curvy so he played it safe.

The dreadnought body is also usually a bit deeper. This is very important because this added depth, combined with the general boxiness of the dreadnought can make it difficult for a beginner to hold comfortably. Particularly when you take into account that the beginner is often going to try to tip the fretboard of the guitar upward in order to peek at his or her fingers!

For smaller people and for people with shorter arms, and for many women, a dreadnought style guitar is simply uncomfortable to hold. It digs into their arms when they reach around to strum and they can’t always get good position with their fretting hand to cleanly finger the notes they want to play.

But if you go into a music store, chances are very likely that more than half (and probably up to ninety percent) of the guitars they have to offer are going to be dreadnoughts. Obviously, you might think that you have to settle for one. Don’t. If you find holding a guitar uncomfortable, regardless of what type of guitar it is, first ask a friend or a salesperson if you’re holding it correctly. Don’t by shy about this. After all, if you’re going to buy a guitar you want it to be a good fit for you.

If you’re still having problems with the dreadnought, ask to check out a classical. Even if you don’t have any intention of buying one! The object here is to examine the fit, to see whether or not the size and shape of the classical makes it easier for you to hold and strum the guitar. Chances are likely (again, if you’re female or have small arms) that you will find the classical shape more to your liking.

And, fortunately, they do make acoustic guitars in similar sizes and shapes. Depending on the manufacturer, these can be called “folk” or “auditorium” or “parlor” style guitars. Here is a photo that shows you a “folk” style (on the left) with both the dreadnought (center) and the “jumbo” style: 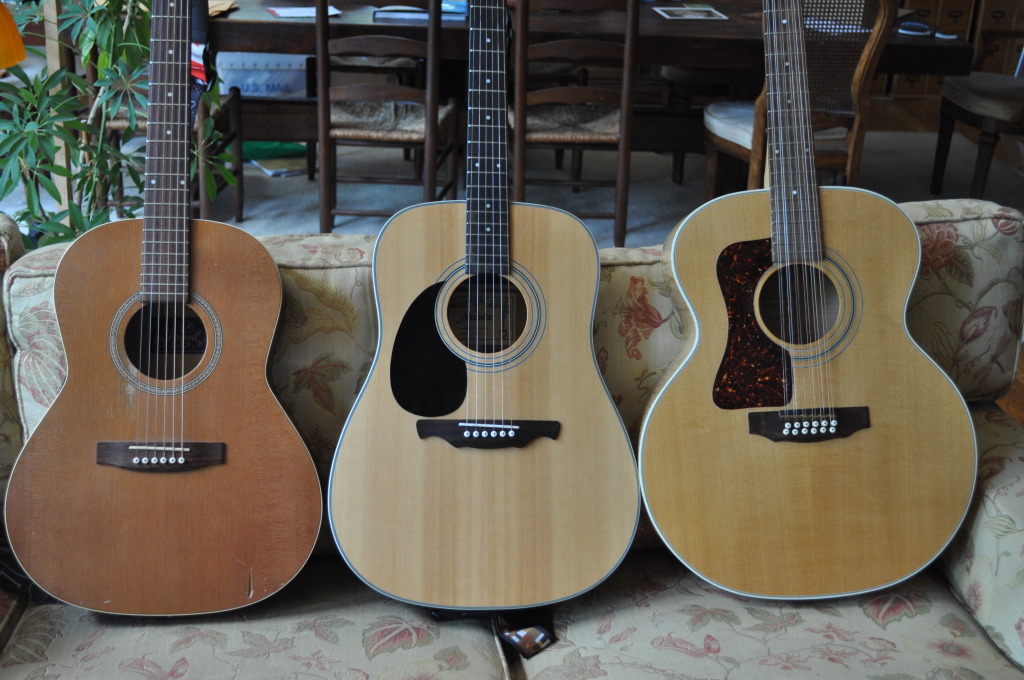 Notice that the folk style guitar has dimensions very similar to the classical guitar from the previous photo. It is both smaller and have more distinct curves than the dreadnought. Also like a classical guitar, these smaller styles tend to have a more balanced sound (dreadnoughts, as a rule, are boomy and a bit bass-heavy) and finger style players usually love them when compared to a dreadnought. But they certainly can be strummed like a “regular” acoustic.

The jumbo sized guitar (shown on the right) is almost like a cross between the folk, or auditorium style, and the dreadnought. It’s curvy but big and deep. A number of manufacturers now make what they’re calling “mini-jumbos,” which have the same shape as the full jumbo but are more the size of a folk or auditorium style.

When at the music store, check around to see if they have other types of acoustic guitars besides dreadnoughts for you to try out. Nowadays more stores are trying to keep a number of “non-dreadnought” style guitars in hand to accommodate players who either want a different sound or need a guitar that is a better physical match for them in terms of size and shape.

This may seem like more work than you’re interested in doing, especially since you’re first starting out on guitar. But you wouldn’t believe how many people start playing and then stop because of frustration in getting clean and clear notes. And in more cases than one will probably admit, the culprit is not the novice guitarist, but rather the guitar that he or she is trying to learn on. Someone may inherit a guitar or be given a guitar and of course you want to learn on it. The last thing you want to hear is that your guitar is keeping you from learning. That may mean investing in a new guitar and then what if you don’t like playing?

This is why it’s important to try out different sized and shaped guitars as soon as you discover you’ve an interest in playing. It doesn’t mean that you have to go right out and buy a different guitar, but it does help you discover that, yes you can play a C chord on a guitar that fits your shape.

Talk with your friends that play and also talk with the salespeople at your local guitar shops. They want you to be comfortable with your guitar and will usually help you try out a number of different types (provided they have them).

Even if you’ve decided to buy a guitar through the Internet, go to your local shop to try out different styles of guitars so that you are aware of which ones fit you best. When you’re buying a guitar off the Internet, be sure you know what style and size it is. The research you’ve done by going to shops will help minimize the chances of you getting a guitar that doesn’t fit you. Above all, know what the return policies are wherever you purchase a guitar, online or no.

Think about this – you don’t run a race wearing dress shoes or sandals. You don’t even train to run a race in shoes other than those you’ll run in. Likewise when it comes to playing guitar, try to find the one that best fits you physically. It will help you get through the early phases of learning the instrument with less frustration. Although you’ll still look like a bobble-head doll from time to time!