Jeff Babicz of Babicz Guitars invited me to attend this year’s Summer NAMM. Of course, this was an opportunity I couldn’t let pass.

NAMM, officially, National Association of Music Merchants, although it’s now international and stands for a lot more than that, is the great convention of the North American music industry. Mostly manufacturers, distributers and resellers. Summer NAMM is the small convention and was held this year at the Convention Centre in Indianapolis.

My better half, Sylvie, and I drove down to the event. Two days from Montreal and two days back. A long drive… It was my first time in the US since the age of twelve and Sylvie’s first time. I have absolutely no compliments to make to the customs officers who made us waste a lot of time for no good reason at all. But other than that, it was a really fun trip.

US highways are in remarkable condition and people drive generally well and are quite courteous. Although I wish someone can send me an email [email protected] and tell me what’s up with all the shredded tires by the roadside.

Anyway, the session started on Friday July 22nd and ended on Sunday the 24th. It’s important to note that these sessions are not open to the public. These are for people in the industry getting to know each other. It also serves to launch new products. Going through the doors of the main exhibit hall was quite an experience. This room is 790 feet long by 265 feet wide. That’s more than two football fields. And it’s filled with musical instruments and accessories…

There are other rooms too, this is just the main one. I felt like a kid in a toy store; I wanted to see everything all at once. Luckily Sylvie was with me to hold me back a little.

We started off by saying a big hello to Jeff Babicz and meeting the folks there. They are all very nice people, but Jeff Babicz Sr., Jeff Babicz Jr. and Jeff Carano makes for a lot of Jeffs in the same space… Jeff (Babicz Sr.) is a little intimidating; if you look at the picture, bear in mind that I’m six foot tall, but he’s a very kind man. 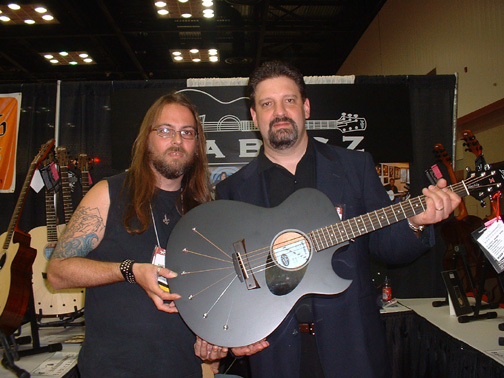 I was privy to seeing, and trying, a prototype of the next product. I can’t say anymore about it except that you’re sure to love it!

I met up with a bunch of people I either knew personally or from email or phone calls. It was great to finally meet (or meet again) these people. Mike van Stiphout of Audio Nova, Dave Russell of Spectraflex, Ron of Jellifish, Anne of String Swing. 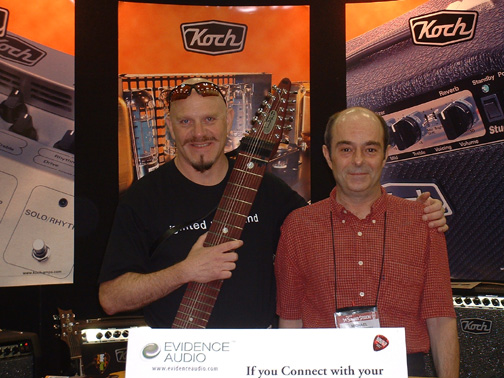 It was also a great occasion to meet so many others in the industry, to actually sit down and chat with them. Discuss product and the general direction of the music industry. It’s comforting to see that most people in the industry are in it because they love it and not strictly for the money.

I can tell you that the industry is in progression with tons of new stuff to make our lives easier. I personally think that’s a really good thing as too many of us tend to use the old stuff because it’s all we see or all we know. Time to break out of your patterns and see what’s out there: you will be amazed! A lot of these things you will be seeing in our pages in the near future.

Another treat was to see and meet interesting musicians in the business, like Chapman Stick player Steve Adelson and Danger Danger’s Robert Marcello (an awesome guitarist!). As well as Joel Hoekstra. There were others, like Slayer’s Kerry King, but it’s impossible to be everywhere at once. 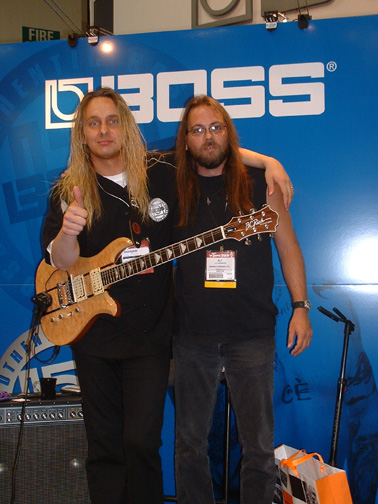 We spent the three days at NAMM going over kiosk after kiosk and talking to so many nice people. Of course, had I not been so excited by all the product we could have gone through the place a little faster, but we were there for the event so it wasn’t a problem, but just think that Summer NAMM is the small event. The Winter Anaheim show is about seven times bigger… Next time I’ll try to be more methodical.

And be on the lookout for many reviews of the products (and people) from this show!