New guitar day for my son

I've posted about my oldest son on here before. Today is his 19th birthday and I'm going up to his college tomorrow to move him back home for the summer after his first year of college. He's done well his first year and hopefully finally settled on a major (computer science, just like his old man). Went and bought his birthday present tonight. I had bought him a Squier Bullet Strat for Christmas a few years back and last year it went missing from his mom's house. We never figured out where it went, someone had to have stolen it. He's been playing mostly bass and some acoustic guitar, but he's always wanted an SG. Picked this beauty up at Sam Ash. It's really a deep red, all the pics I took come out looking lighter and pinker.

It's the cheaper Epiphone, but it plays like a dream and sounds great. The pickups are very crisp and have no noise at all. Nice crunchy distorted sound and sweet clean (at least on neck or neck+bridge pickup, bridge by itself is a little too bright). I admit, I've never been a fan of the SG, but playing this one, I'm kinda liking it! 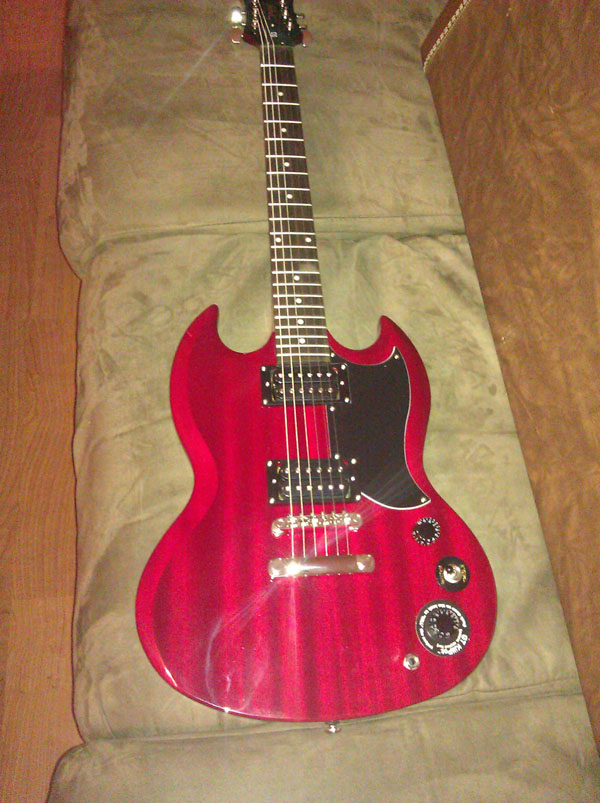 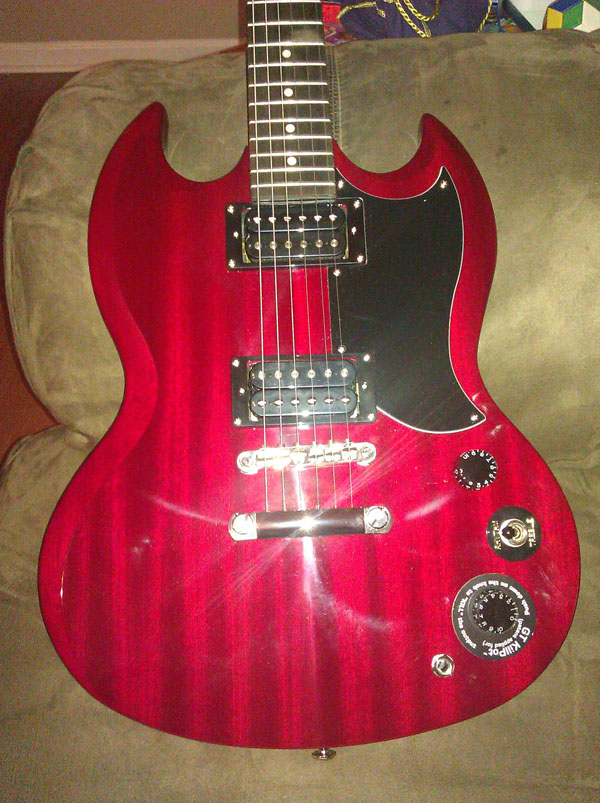 The SG is a traditional guitar, although I'm not a fan neither, sometimes I was reading and watching reviews about them. This one seems pretty nice. I like the top.

By the way, what does the second switch do? One is for selecting the pickups, is it a kind of tone?

That's a beauty, good choice, good family history. I'm sure your son will be thrilled! SG's are a very comfy and a nice sounding guitar. Congrats to him, for college & hard work. Also, best regards to you for being a great dad, and a helper. :D

The knobs are volume and tone, but the tone knob has a kill switch built in. If you press down on it, it cuts the sound. I guess if you are wanting to play some Tom Morello type stuff it would come in handy.

Cool! You are a great dad.

That'll be a cool gift. Those cheaper Epi SGs play just fine, too. I've grabbed them from the wall plenty of time when trying out amps in the past. Congrats to you and your son! 8)

looks like a great guitar. I've played some of the Epi SG's. A friend of mine had one and put some Gibson pickups on it and it sounded great and the total cost was about 1/3 of a Gibson SG. I'm thinking of building a SG from a Kit. Ed Romans and Guitar fetish have kits for about $200-$300 USD. I'll use p-90'S on mine.