Forums
Your Opinions
Opinions and Polls
Hendrix - was he re...

Hendrix - was he really that good?

OK.. so Im going to hit this from another angle... Ya, no doupt he was a GREAT player. I will agree with that for sure.. Best? Whos to judge? thats a personal thing, and we all have diferent tastes..

What I WILL say.. the guy sorunded hisself with the best. He played with the best players, he learned, and tought them... The guy had the best rythem section going!!!!!! They just built that grouve that was SO solid that he just grew out of!!! IMHO it was that... the fact that he put together the best foundation he could to build on.... THATS what makes him a great player/proformer IMHO..

i totally agree. a huge part of the sound you associate with him is the animal behind the drum it.

I think Hendrix was an awesome guitar player and it's hard to deny that. I went to a Hendrix exhibit in Seattle and saw a bunch of video of him playing and it blew me away.

He wasn't as good of a songwriter, and his vocals, well, I love the guy but they weren't his strong suit. It's perfectly fair to say that sometimes he just needed to relax and let the melody come out. Commercial pressure might have influenced him there. Everyone knew of him as the crazy bastard playing guitars with his teeth, so he might have felt like he had to showcase what he could do with his songs.

My site: http://www.masspire.com Masspire - Independent Artists Websites. It's a place built to give independent artists a fair and free chance when they're just starting out, and that includes musicians.

I think in that people like Clapton (who was considered "God" by many) Jeff Beck, Ritchie Blackmore and many other top musicians of the 60s were blown away by Hendrix really says something. Sure you can probably name many people who emerged after who became more technically proficient etc.. but he was such a catalyst for so many people - inspired so many to make music or just change their approach in making music somehow.

well, he was better than them. different, too. i guess you could argue for john mclaughlin, but no one at that time was at that level in rock, and even he was influenced by hendrix when it comes to tone and energy. he changed the way ppl play the guitar.

He was really good for his time. He was a showman and that made him dynamic. I don't think he was influential though. But he does go down in history of guitars.

Seems most of you who've replied cite him as a big influence.

Personally, I have nothing against his vocals or songwriting....and I'd probably agree with you on both of the points above. Yes, he was a brilliant guitarist (and an excellent showman) and yes, probably/possibly the most influential rock guitarist of all time.

There's just something about a lot of his music that just doesn't gel for me, personally, though....a lot of it is probably down to his (again, this is just MY opinion) way-over-the-top use of the wah-wah pedal. I've never liked that sound....and I will never need a wah-wah pedal as long as I live. His ballads - Little Wing, The Wind Cries Mary, etc - are the Hendrix songs I enjoy. Hey Joe, All Along The Watchtower - one of the all-time great cover versions, even if there is a little wah-wah in there - are a couple of other songs of his I like.

But.....I couldn't sit through a whole Jimi album. Music has to provoke a response - emotional or otherwise - and after 3-4 tracks, I'd have to take a Hendrix album off and put some Beatles Stones or Who on.

Please don't think I'm dissing him....that's not my intention. One of the iconic moments of the whole 60's was Jimi and the Experience playing "Hey Joe" on the Lulu show - search it on youtube. Half way through, Jimi stops the song and says, "Ah, I'm tired of playing this crap (sic)" - and launches into an instrumental version of "Sunshine of your Love" which he dedicates to Eric, Jack and Ginger.

I well remember my parent's and grandparent's reaction....we were all watching together....ranging from "what the HELL is that thing!" and criticising his hair, to "he SWORE on television!".....I didn't particularly like the music (I was about 10-11 years old at the time, didn't know who Cream where, and was very much into mainstream pop music....I hadn't even found any of the pirate stations then!)

But love him or not, it cannot be denied that he was a huge influence on music.....

One thing that has more or less been overlooked throughout this entire thread is the brevity of his career . He did what he did in four years . He may have just scratched the surface of what he could have brought to music . It's also possible that he could have run out of ideas and faded away . Alas , we'll never know !

If I claim to be a wise man , it surely means that I don't know .

Seven years. He formed his first band was in September 1963 and he was with the Isley Brothers by early '64. Don't mistake "career" for simply the output of recorded music. Your point is still a good one, as seven years was way shorter a time than virtually any of his peers. You could make the argument that Buddy Holly's career was shorter but one would also have to take into account all the music he made with his family and his duo work with Bob Montgomery while both were in junior high school.

There's a lot that goes into a career. Usually the lifetime leading up to it.

Well, I think we can all agree that this is pretty clever: 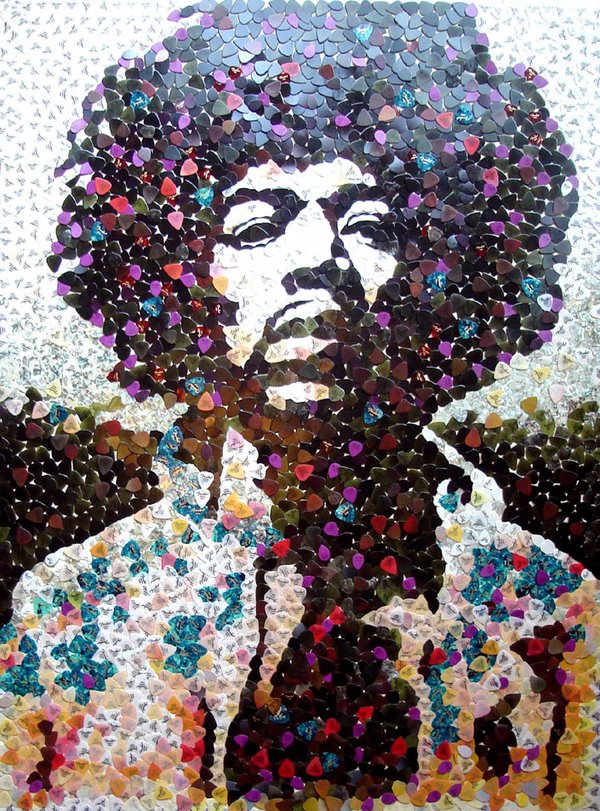 Seven years. He formed his first band was in September 1963 and he was with the Isley Brothers by early '64. Don't mistake "career" for simply the output of recorded music. Your point is still a good one, as seven years was way shorter a time than virtually any of his peers. You could make the argument that Buddy Holly's career was shorter but one would also have to take into account all the music he made with his family and his duo work with Bob Montgomery while both were in junior high school.

There's a lot that goes into a career. Usually the lifetime leading up to it.

Peace
As a back-up player to those other acts he played what they wanted him to play . When he went on his own was when he started to influence his peers . So you can say it was seven years , but it was really four .

If I claim to be a wise man , it surely means that I don't know .

The man was amazing!

We are forgetting that in the art world, death has always had a way of elevating an artists/performers work. Look at all the great guitar players that are also world class that are still around. I’ll start with one one that I believe had the most effect on Jimi’s playing. Look at Buddy Guy. Frankly look at his late 50’s, early 60’s performances… OK, a little bit different, but you can’t say that Jimi didn’t look up to, and study every note, and every performance he did! Does the guy bagging your food at the local food mart know who Buddy Guy is? Nope Doubt it. Look at the big names.. Page, Clapton, Beck… you could say they were at least as influncal as Jimi, if not more so. But all still being with us, we have also seen them do bad 80’s stuff, and adds on TV, and movie scores… if their lives were cut short I would argue they would have made a bigger impact. It’s just that he has been risen to a mythical guitar player after his death. I can’t say why we as people react this way to art, but it’s been going on since the start of time. So while he was a great player… I think a lot of his legendary status has been filtered through his death.

Lets not forget Robert Johnson being known as the most important blues man to ever grace the death but also died as a very young man....... Son House lived on a lot longer but I would say that far fewer people know who he is.

It's not really about his (Jimi's) early death to me though, the first time I listened to Hendrix I had no clue of his history or early death - I just liked what I heard. Possibly the best way to come to an artist I think.