And welcome to the April 2014, or “Earth Day edition” if you prefer, of Guitar Noise News, the “official newsletter” of the Guitar Noise website. Paul even has an Earth Day Guitar Noise logo for the occasion!

This whole new logo-of-the-moment idea has created some wonderful new looks for the website. One can only wonder what will be in store for May. There’s May Day and Mother’s Day, to be sure. There’s also Cinco de Mayo, World Red Cross Day, Memorial Day, and Amnesty International Day. Did I mention Limerick Day or International Jazz Day or Wear Purple for Peace Day or (in the United States anyway) National Waiters and Waitresses Day? How about Buy a Musical Instrument Day? No lie, that’s May 22, just nine days before Save Your Hearing Day at the very end of the month.

Personally, I’m hoping Paul will pick Victoria Day, if only so I can relate a story about discovering the Kinks. I guess we’ll have to wait and see.

Question of the Moment

I’m reading your Idiot’s Guides: Playing Guitar book. It has been a wonderful guide for me as I learn how to play the guitar. I do have one question, however. The book mentions that chords are made up of three notes, but all of the chords taught in the book use at least four notes (like the D chord has four notes, E chord has six notes, etc.) Why do chords on the guitar have more than three notes?

Thank you for your time,

Hi and thanks for writing. And thank you as well for your kind words concerning Playing Guitar.

When the book mentions that chords are made up of three different notes, that is correct in terms of note names. Because the guitar has six strings you can play up to six different notes at once, which means that you can play chords where notes (in terms of note names) are repeated, or you can simply play three strings to make a chord. It truly depends on the chord being played more than anything else.

Play an Em chord, for example, and you play the following notes:

Here’s the thing, though – suppose you just strummed the three thinnest strings of your guitar. That would still be an Em chord because you’re still playing the notes E, G, and B. However if you strummed only the three thickest strings, you’d be playing only the E and B notes, so that would not be an Em chord, but rather what’s called an “E5” chord or a power chord.

I hope that this helps. If it’s more confusing than helpful, drop me another email and I’ll try to explain it better than I just did.

For that matter, please feel free to email anytime with any questions, observations, or suggestions you might have. I look forward to chatting with you again.

More Questions of the Moment 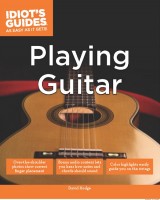 Wait! What’s this Idiot’s Guides: Playing Guitar book? When did this happen? Why are there now two Idiot’s Guides to Guitar? What are the differences?

The publishing industry, like the music industry, is a very strange place. As you know, I’ve written a number of “Complete Idiot’s Guides” books for Alpha Books. What you may not know is that Alpha is part of a large publishing empire which includes Penguin Books and also DK Publishing. I’m certain that many of you may be familiar with DK as they have created some wonderful books on all subjects, usually chockfull of photos and illustrations.

Anyway, in the Fall of 2013, Alpha introduced a “new line” of their Complete Idiot’s Guides’ series, done more in the style of the DK books. I spent most of the winter and spring of 2013 reworking The Complete Idiot’s Guide to Guitar, which was released as one of the first twelve books of this new line. It’s called Idiot’s Guides: Playing Guitar. And both books are currently available.

You might wonder what’s the difference between The Complete Idiot’s Guide to Guitar and Idiot’s Guides: Playing Guitar. The easy answer, which is not a complete one, is that the new book, Idiot’s Guides: Playing Guitar is more photo and illustration-heavy while The Complete Idiot’s Guide to Guitar is more text-driven. In the new book, every two-page spread (the left and right hand pages as the book lays flat) is a lesson on a different topic. For example, if you open to pages 38 and 39, you’ll be on the “Your First Easy Chords” spread, complete with chord charts for E, Em, Am, and A as well as photographs of the chords being played on the neck of a guitar, taken from the angle of the guitarist playing the chords.

When writing the new book, I tried my best to make it a different one than The Complete Idiot’s Guide to Guitar, at least as different as one can make one beginners’ guitar book to another. Aside from all the photos of chords, there are also photos illustrating how to play hammer-ons and other slur techniques, how to position a slide, how to use a capo, and even how not to hold your guitar when sitting.

More importantly, I tried to also make certain that the music and song examples that accompany Idiot’s Guide: Playing Guitar (all available online – there is no CD) (the book is also available for online readers such as Kindle) were different than those in the first book. And with the exception of two songs (a chord melody version of “Beautiful Dreamer” and a new two-guitar version of the traditional “Saint James Infirmary”), you’ll find all new songs. Yes, they are traditional songs, such as “Erie Canal” and “Pay Me My Money Down” but they are done in what I think are fun, new arrangements that are also meant to teach you specific guitar ideas and techniques. There are also a handful of original songs as well, including one done in open G tuning in Hawaiian slack-key fingerstyle and one incredibly gorgeous lullaby that wrote up as a Guitar Noise lesson in alternate tuning ages ago (which never got an audio file). As with the first book, Idiot’s Guides: Playing Guitar features our own Nick Torres singing on these arrangements and, just as before, he makes all the songs much better than I could do alone. Personally, I’d buy the book just to hear Nick. He’s more than worth it.

As always, I can’t thank the Guitar Noise community enough for making this book possible, and I’m always happy to answer any questions you might have about them. Just drop a line here in the comments or email me directly at [email protected]

In fact, it’s owing to a new book project that there have been no new lessons for the past few weeks (and I’ll tell you all about the new project next month). However, the good news is that work on the new book is a few percentage points short of finished so there will be more new lessons coming up very soon, such as Guitar Noise Song Lessons on Radiohead’s “Fake Plastic Trees” and “Karma Police,” which should be up online by the end of April or the very first part of May at the latest.

And, as mentioned in our past newsletters, we’re planning on adding new song lessons throughout 2014, featuring songs from Led Zeppelin, Gordon Lightfoot, R.E.M., Sheryl Crow, and the Grateful Dead. We’ll also be bringing you lessons on all sorts of other topics, such as ukulele arrangements of R.E.M.’s “Man on the Moon” and “Losing My Religion.”

And please don’t forget that Guitar Noise invites you to advertise you (or your band’s) upcoming gigs here on our Events Page. Announce your gig, drop Paul a line on our “Gig Alert” thread on the Guitar Noise Forum page’s News Section.

This and That (or “Neither Here Nor There”)

“Earth Day” is “Earth Week” in many countries across the world, which is kind of nice but also kind of strange. Most holidays, even the made-up-for-whatever-goofy-reason ones, are strange when you think about them seriously. And that includes birthdays. Why set out one day, or even one week of the year to treat someone or something special when it makes much more sense to always do so?

Isn’t that a typical lament? How many times have you heard, or even said yourself, that it’s a shame people can’t act as nice as they do at Christmas or Thanksgiving or Secretary’s Day all year ’round? Again, seriously consider just how important can anything be if we only treat it seriously for one three-hundred-sixty-fifth of our lives? That’s .2739% in case you’re interested.

Earth, meaning this planet, is all that we have. Regardless of one’s politics or religion (or lack of either), it should be easy to understand that. And everything, from the air to water to all the animals and all the art and music, not to mention every single person alive, is part of the planet, too. Certainly celebrating that and doing our best to make sure that everyone can continue to celebrate it in the future, is worth more than .2739% of our time and effort, no?

Maybe this is why I’m hoping Paul picks Victoria Day in May. Can you imagine what I might write for No Dirty Dishes Day?

As always, I look forward to bringing you more news about both the Guitar Noise website and its members.

Play often (meaning “every chance you get!”).