I can't look at this thread and help but wonder how yoyo286 is these days. (he started this thread)
anyone here remember him, or keep in contact?

He still has a Soundclick site, but I don't think he's posted anything on there since he disappeared.

Electric:
Epiphone Vintage G400 Brown (I love SGs and the vintage brown looks awesome. Doesn't show fingerprints like a gloss finish would.)
Epiphone Les Paul Plus Top Limited Edition Ebony (I gassed about a Les Paul for a while, Probably should've went for a wine red or something, but the black looks like a plain top from certain angles and I kinda liked that effect.)
Epiphone Firebird Studio Limited Edition Tobacco Sunburst (My upgrade from a Squire Bullet Stratocaster copy which I sold for 30 bucks to a girl who wanted to learn guitar.)
Squire Thinline Modified Telecaster (I needed some twang and it was dang cheap. Plus all the necks on the fender telecasters were orange :? .)

Acoustics:
Fender DGA1 NAT ( it was a cheap acoustic I bought for 120 bucks, played nice too! )
Takamine G Series EG531SCDR Dreadnought cutaway acoustic electric ( It was a beatiful guitar the I got for cheap, and the Dragon inlayed into the body is sexy. )

Amps:
Marshall MG 15 DFX (My first amp. I don't care what anyone says I like the way it sounds and the effects are fun!)
Fender Blues Junior (My tube amp, I love the simplicity and sound. Plus it was on sale.)

Effects:
Boss MD2 Mega Distortion Pedal (I wanted a pedal that could get me close to Slash's sound. I love useing it to play Guns N' Roses songs.)
DOD FX100 Integrated Tube Distortion pedal (I got this pedal cause it gets nice blues tones)
DOD FX101 Grunge Distortion pedal ( It was a gift, It's actually not a bad pedal. Noisy though)

Canrock I have the same Tele that you got. :D

Nice guitar Ryan, are those locking tuners? Clip the string ends before you poke your eye out!

hahaha, those have been on there for like a month >.>
Im so lazy, I even just bought new strings.
back down to 9s!

haha, anyone have a soldering iron I can borrow? )
I guess i lost mine moving or something, cant find it.

Well, the Turser only lasted four months due to a rush decision on my part, but here's the well-fitting replacement:

Epiphone Firebird Studio in worn cherry finish. I replaced the factory pickups with Seymour Duncan SH-2 and SH4 neck and bridge respectively then added the pearl knobs. Just have this thing about pearl lately, but for now the pickguard is safe

WOW this thread got busy since the last time I'd checked it.

As Musica said, this thread is great!!

Some great instruments in this thread!

I've only been playing (again) for about 6 months, but allready have my apartment at the bursting point... I don't even know how it happened!

I started with an Epiphone Les Paul Standard: 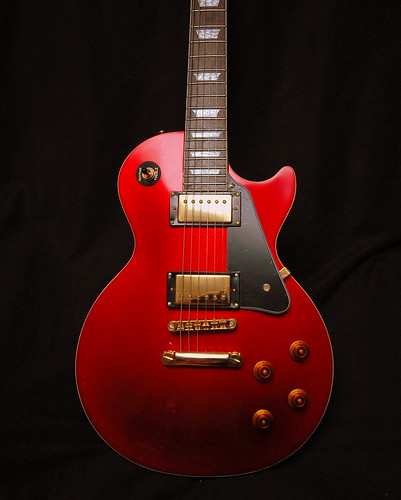 A few months in and I grabbed a smokin' deal on a Washburn acoustic from Musician's Friend: 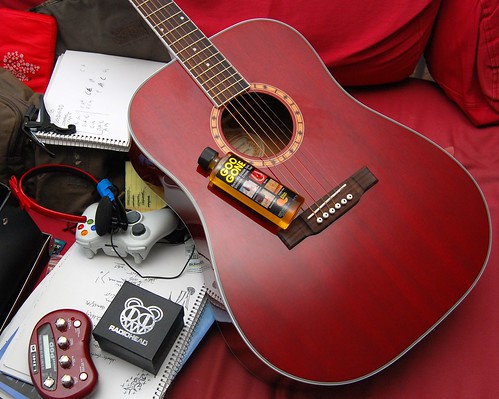 (you can see the Pocket Pod that I used with the LP in that shot too.

When I was unemployed for a couple months this spring I finally tackled a DIY bass project that I'd had for years unassembled under the bed: 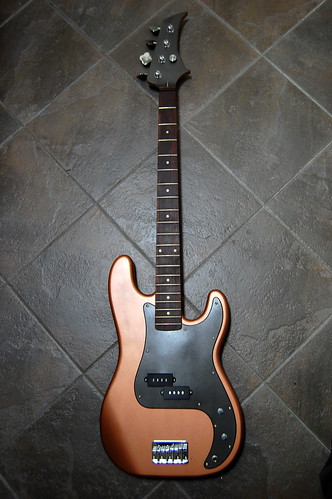 It went together OK, but I don't really play it. I'll get around to doing a better set-up on it at some point I'm sure, but for now I'm focusing on the guitar(s).

Then my mother surprised me with an amazing Charvel for my 30th birthday this month: 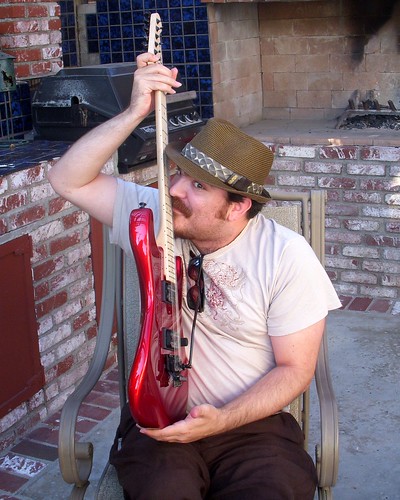 She might not look the part, but she plays some real nice blues!

I then decided that I needed to really hear the guitars through something other than 'phones so I splurged on a Vox AC15: 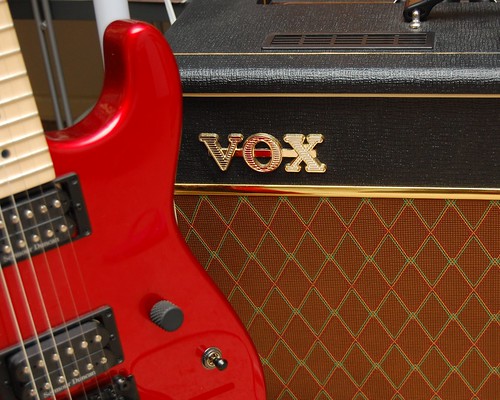 I'm having a blast dialing in different sounds with it! It gets a real nice growl even at apartment volumes.

+1. Thanks CuppaJack; thought I could be satisfied for at least a little while longer!

You aren't kidding.
The scary thing was I didn't even realize it was happening... Totally snuck up on me!

If I can keep the Tele-dreams out of my head I think I'll be safe for a while!

Since I have moved the dog house I thought I would post an updated pic. All my guitars with my new pride and joy up in front. :D

Nice inventory mate! I've been looking for THAT black telecaster for a while! 8)

It's been a long time since I was here...I just want to help now...maybe learn something along the way...my inventory has grown some so...let's see if this works...

I know noone cares but in order from the top and left to right:

-ESP LTD EC-1000...book matching sucks but I like the sound...was the closest I ever got to buying a Les Paul (swore I never would but)

-next picture is of a Schecter C-1 Exotic Maple top and of course
the guitar on the left needs no introduction...almost twenty years and I finally bought a Les Paul a few months ago.

and a bunch of other pedals I've either sold or don't use anymore. Like an original Marshall Guv'nor I recently sold.

Ok enough about me now let me get back to looking at everyone elses collections.

BTW looking for a Tele....want one bad and don't know whether to go for the new ones or ? Know nothing about them.

That is an astounding collection of guitars. WOWWEEEE

How do ya like that Fernandes Ravelle? I always wanted to play one and see how it feels, but was never able to find one in a store. It sure is cool-lookin' and I'll bet it sounds great, too!

Love and Peace or Else,
CC