“if you tried to give rock and roll another name, you might call it ‘Chuck Berry’.” – John Lennon

Charles Edward Anderson Berry died on March 18, 2017 at the age of 90. Born in 1926, he grew up in a middle class, north Saint Louis neighborhood, taking up music at an early age, giving his first public performance at fifteen. He loved listening to T-Bone Walker and hits like “Bobby Sox Blues” (1946), “Call It Stormy Monday” (1947) and “West Side Baby” (1948) served as Berry’s inspiration for both the fledgling musician’s guitar playing and performance style.

“… he could play the guitar just like a ringing a bell…”

In the early 1950’s, Berry was playing gigs to supplement his income. On New Year’s Eve 1952, he got a call from pianist Johnnie Johnson, whose sax player, Alvin Bennett, had just had a stroke, leaving Johnson’s trio in immediate need of a third musician. Because of Berry’s relative inexperience in the St. Louis music scene, Johnson figured it likely the guitar wouldn’t have a New Year’s Eve gig. And while Berry was certainly not the most proficient guitarist, he did bring his vocal talents as well as a great deal of showmanship to the group. As things turned out, Bennett would not be able to play again because of his stroke and Berry was asked to become a permanent member of Johnson’s group. 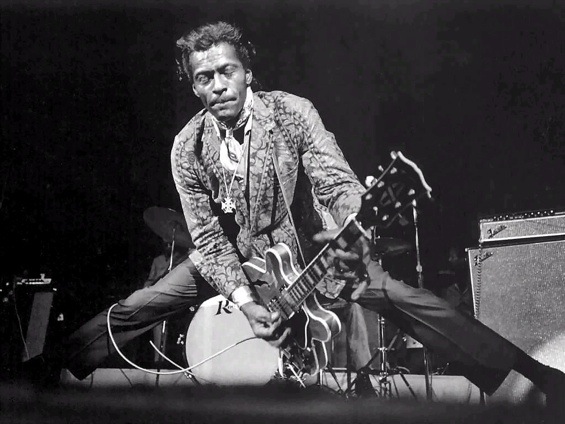 Berry’s sense of showmanship, to give audiences a memorable time, made him realize the power of blending musical genres together to create a more powerful performance. While Johnson’s trio played primarily R&B, ballads and blues, Berry recognized that country music was also incredibly popular, especially with people shelling out money for gigs. Mixing in country tunes into the group’s playlist made them even more popular and mixing styles in the songs themselves, such as singing a Muddy Waters’ song in the style of Nat King Cole, got them bookings.

Meeting Waters in Chicago in 1955, Berry was introduced to Leonard Chess of Chess Records, who signed Berry as a solo artist, with Johnson and Ebby Hardy (the trio’s drummer) becoming Berry’s band. While Berry had thought Chess would hire him as a blues artist, the producer had other plans. With rock and roll and country squeezing out the R & B market, Chess had Berry record “Maybellene,” the group’s take on Western swing star Bob Willis’ “Ida Red” and the resulting single hit #1 on the R & B charts and #5 on the “Billboard Best Sellers in Stores” list.

“Chuck was my man. He was the one who made me say ‘I want to play guitar…'” – Keith Richards

The following years saw Berry become an International sensation, churning out songs like “Roll Over Beethoven” and “Too Much Monkey Business” in 1956 and then “School Days” and “Rock and Roll Music” in 1957 and “Sweet Little Sixteen” in January, 1958.

His influence on both his peers (Carl Perkins was amazed that Berry knew as many country songs as Perkins did) and the musicians that followed in undeniable. His songs have been covered by just about every group and artist you can think of. His “Beautiful Delilah” opens the Kinks’ self-titled debut album and if you were to list everyone who’s covered either “Roll Over Beethoven,” ” Rock and Roll Music,” or “Johnnie B. Goode,” or any of his other songs, you’d be seeing names like Elvis Presley, Jimi Hendrix, Status Quo, The Beatles, Iron Maiden, Leon Russell, The Rolling Stones, Mountain, Jerry Lee Lewis, The Who, Gene Vincent, Uriah Heep, Electric Light Orchestra, Johnny Rivers, The Byrds, AC/DC, Led Zeppelin, John Denver, Green Day, Living Colour, Uncle Tupelo, The Stray Cats, Lynyrd Skynyrd, Bon Jovi, The Beach Boys, Buddy Holly, Slade, Bill Haley and the Comets, Prince, B. B. King, Peter Tosh, Aerosmith, The Grateful Dead, Carlos Santana, Phish and the Sex Pistols, just to name (literally) a few.

Fittingly, Berry was one of the first musicians inducted into the Rock and Roll Hall of Fame and, along with Pete Townshend, was part of the groundbreaking ceremony held on June 7, 1993. 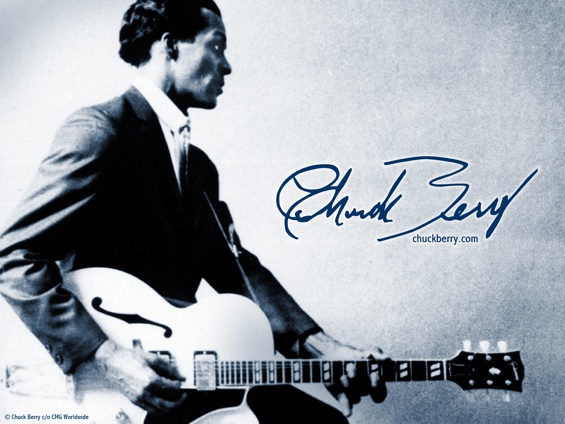