In The Bleak Midwinter

Hello, and welcome to my first installment of Celtic Music for Guitar. I’ll be bringing you arrangements of tunes, songs, hymns and other music from the Celtic world, including England, Ireland, Scotland, and Wales. I will be presenting fingerpicking and flatpicking arrangements using tunings commonly associated with Celtic music, including DADGAD, dropped-D, standard tuning and others.

My favorite hymns have always been those that use traditional Celtic melodies for the hymn tune. In some cases, the melody may be an original composition, but based on a traditional tune or folk song. That’s the case with In The Bleak Mid-Winter, a well-known hymn from the British Christmas tradition.

Perhaps best known for his orchestral masterpiece The Planets, Gustav Holst (1874-1934) also left his mark on hymnody by composing the melody to the hymn In The Bleak Mid-Winter. Holst’s melody, Cranham (named after the town in which it was written), was set to a poem written by English poet Christina Rossetti (1830-1894), which had been previously published in her posthumous collection Poetic Works. In The Bleak Mid-Winter was first published in The English Hymnal in 1906, and has always been one of Holst’s most popular compositions. 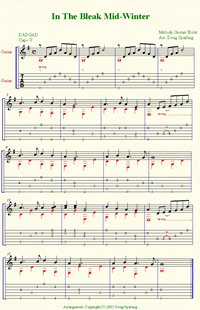 The melody Cranham was based on a folk tune, which is not surprising as Holst’s music was influenced by English folk song (to which he was introduced by lifelong friend Ralph Vaughan Williams). The beauty and simplicity of folk song struck a chord with Holst, inspiring him greatly.

This simple arrangement uses DADGAD tuning and should be played in a harp-like manner, that is, allowing notes to ring together where possible. This ringing of notes and open strings is a common technique used with DADGAD and is part of the tuning’s great appeal. The four-bar introduction, which is a simple repeated arpeggiated chord, and the ascending lines in measure eight and sixteen should be played in a harp-like fashion, allowing the notes to sustain and ring together. Another spot where the notes should ring freely is in measure five, where I’ve placed the first three notes of the melody on three adjacent strings. The first note of measure five (B) could have easily been played on the second string, but playing it on the third string allows you to sustain that note as you play the C on the second string and D on the open first string.

This is a simple, beautiful melody, so I’ve left the arrangement quite sparse. Allowing the melody notes to ring together is what brings this arrangement to life.